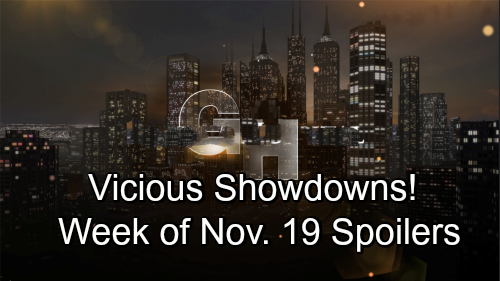 General Hospital (GH) spoilers for the week of November 19-23 tease that the action will rev up in Port Charles. First, Ava (Maura West) will do some manipulating. She’ll twist things around to get Franco (Roger Howarth) to do what she wants. That might set up some Kiki (Hayley Erin) trouble, so Franco could inadvertently become part of Ava’s revenge plot.

Over with Drew (Billy Miller), he’ll manage to drive Kim (Tamara Braun) away. Oscar’s (Garren Stitt) emancipation lawsuit is really taking a toll on his parents, so it sounds like they’ll crack under the pressure a bit. That’ll lead to conflict over how to handle the teen, but Monica (Leslie Charleson) will have the right idea. She’ll spend some quality time with Oscar and try to put him on the right path.

Meanwhile, Spinelli (Bradford Anderson) will come through for Carly (Laura Wright). Whether she’s stuck on the mystery patient drama or investigating the hair found on Mary Pat (Patricia Bethune), Spin will be on the case. He’ll do whatever he can to give Carly answers and peace of mind.

Other General Hospital spoilers say Maxie (Kirsten Storms) will take a trip down memory lane. She’ll be joined by Lulu (Emme Rylan) for this bittersweet task. They’ll undoubtedly reflect on better days with Nathan (Ryan Paevey) and Dante (Dominic Zamprogna). These couples were so happy once upon a time, but everything has changed.

Now Maxie’s trying to navigate life without her wonderful hubby. Lulu’s doing the same, but in a different way. Dante isn’t dead, but he’s certainly not around. That’ll remain difficult for Lulu, especially as she deals with Charlotte (Scarlett Fernandez) and the bullying issue.

GH fans will also see Julian (William deVry) step up. He’ll make a bold move that leaves Sam (Kelly Monaco) impressed, so that says a lot about how far he’ll go. Elsewhere, Laura (Genie Francis) will show up at exactly the wrong place at exactly the wrong time. Perhaps she’ll crash a date or at least a sort of date between Ava (Maura West) and “Kevin” aka Ryan (Jon Lindstrom).

General Hospital spoilers say Nina (Michelle Stafford) will be on a mission this week. She’ll make it her goal to put Ava in her place. These ladies will have a major showdown, so that’ll definitely be worth tuning in for. When it comes to shouting matches, Ava and Nina know how to bring it!

Finally, Jason (Steve Burton) and Sam will grow closer. They’re inching toward a reunion little by little, so let’s hope they can keep it up. We’ll give you updates as other GH news comes in. Stay tuned to the ABC soap and don’t forget to check CDL often for the latest General Hospital spoilers, updates and news.