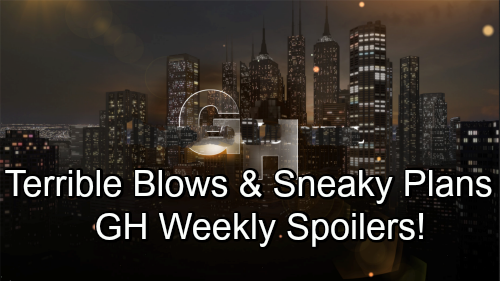 General Hospital (GH) spoilers for the week of November 26-30 tease that some stressful situations are ahead in Port Charles. First, Oscar (Garren Stitt) will be tense as he fights to keep his secret. He’ll hope to make Josslyn (Eden McCoy) believe that Cameron (William Lipton) was mistaken about his illness.

Of course, Joss will sniff out the lies in an instant. She’ll argue that the jig is up, so Oscar had better start talking. Josslyn’s been a mess over this breakup, so she’ll want some answers about Oscar’s elaborate plot. Meanwhile, Curtis (Donnell Turner) and Jordan’s (Briana Nicole Henry) wedding will take place. There may be a few hiccups along the way, but they should end the evening as husband and wife.

Other General Hospital spoilers say Liz (Rebecca Herbst) will have Aiden (Jason David) on her mind. She’ll wish she could resolve this bullying issue, but prying info out of Aiden will be tough. Over with Nina (Michelle Stafford), she’ll enjoy a night at the ballet with Charlotte (Scarlett Fernandez). Perhaps she’ll see some of the warning signs Willow (Katelyn MacMullen) talked about and try to help the kid.

Elsewhere, Peter (Wes Ramsey) and Maxie (Kirsten Storms) will grow closer. They’ll share not one, but two warm moments this week. General Hospital is really revving up their bond, so a romance can’t be too far off.

Across town, Griffin (Matt Cohen) will get some horrible news. Will this involve his future at GH or could it be about Kiki (Hayley Erin)? Since there’s so much buzz about Kiki potentially being killed off, every spoiler seems to strike fear! Curtis (Donnell Turner) will also become a bad news messenger this week. He won’t like it, but he’ll have to give someone some unfortunate updates.

Will this involve Nina (Michelle Stafford), Valentin (James Patrick Stuart) and Sasha (Sofia Mattsson) issues? Could it be about Stella (Vernee Watson) instead? Whatever the case, Curtis will be wrapped up in some chaos as usual. As for Britt (Kelly Thiebaud), she’ll pop up again to have a chat with Anna (Finola Hughes). Perhaps Anna will be ready to up their game on catching Liesl Obrecht (Kathleen Gati).

Over with Sonny (Maurice Benard) and Carly (Laura Wright), General Hospital spoilers state that they’ll face a crisis. They’ll have some options to consider, so they’ll try to figure this out. There’s a good chance this will revolve around Margaux (Elizabeth Hendrickson). She happens to be Sonny’s main source of drama right now, so Carly will want to help him handle it.