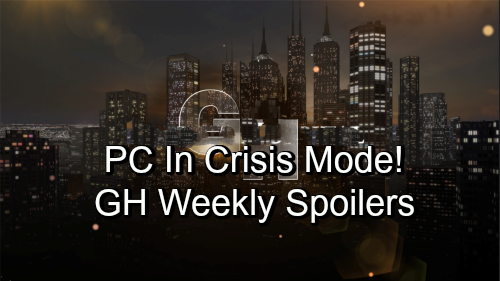 General Hospital (GH) spoilers for the week of November 5-9 tease that Port Charles residents will be in crisis mode. First, Carly (Laura Wright) will be a mess over all the Mary Pat (Patricia Bethune) chaos. She’ll need someone to lean on, so Jason (Steve Burton) will step up. He’ll listen as Carly talks about how she’s haunted by Ferncliff and the trauma she endured.

Of course, Carly won’t be able to shake the mental image of dead Mary Pat either. Curtis (Donnell Turner) will offer his services to somebody this week, so maybe he’ll pitch in on the murder investigation. He might plan to help Jordan (Briana Nicole Henry) out with some digging.

Margaux (Elizabeth Hendrickson) will do some digging this week as well. Perhaps she’ll look into Sonny’s (Maurice Benard) claims about Jeanette (Ely Pouget), Scully and Vincent. Margaux will want to get the truth for herself, so her investigation will get underway soon.

Other General Hospital spoilers say Terry (Cassandra James) will have a heavy heart. She’ll confide in Liz (Rebecca Herbst), so this may be about Oscar (Garren Stitt). They both know Oscar has a tumor and needs a clinical trial to survive. Since Oscar’s refusing to cooperate, Terry could at least voice her frustration and concern for Kim (Tamara Braun).

Liz will also confront Cameron (William Lipton) this week. She’ll grow increasingly suspicious of his bond with Josslyn (Eden McCoy), so Cam will have to answer some tough questions. Meanwhile, Ned (Wally Kurth) will get a phone call that leaves him rattled. Is trouble headed straight for the mayor? Ryan (Jon Lindstrom) wants Laura (Genie Francis) to win and stay out of his way, so he could target Ned.

GH spoilers say Ryan will also be busy with Ava (Maura West). He’ll make some moves that leave her both confused and curious. Over with Chase (Josh Swickard), he’ll deal with some awkwardness. An encounter will leave him a bit uncomfortable, so this may involve another run-in with Willow (Katelyn MacMullen).

Next, Brad (Parry Shen) will divulge a stunning secret. He’ll fill Britt (Kelly Thiebaud) in on something big, so he may expose at least part of the baby swap plot. Brad could use a chance to get things off his chest and seek some advice. Britt’s a schemer as well, so she may have some good tips for Brad. She may tell him to calm down and just focus on keeping up the charade.

General Hospital fans can expect more tricks from Nelle (Chloe Lanier), too. She’ll be plotting behind bars, so Michael (Chad Duell) had better watch out. It sounds like some great episodes are coming up. We’ll give you updates as other GH news emerges. Stick with the ABC soap and don’t forget to check CDL often for the latest General Hospital spoilers, updates and news.