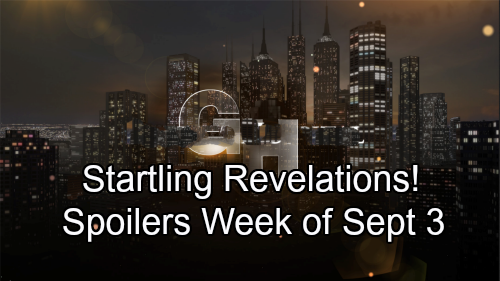 General Hospital (GH) spoilers for the week of September 3-7 tease that more Port Charles drama’s ahead. First, Alexis (Nancy Lee Grahn) will seethe over a startling revelation. Perhaps this will involve Julian (William deVry) meddling in the custody case. Alexis may feel like Julian’s actions could cost Brad (Parry Shen) and Lucas (Ryan Carnes) the kid, but he just might end up saving the day instead.

Meanwhile, Oscar (Garren Stitt) will be rushed to the hospital. When Kim (Tamara Braun) finds out about his seizure, she’ll feel powerless to help. Julian will reach out to Drew (Billy Miller) for assistance, so he may fill Drew in on what’s happening and urge him to connect with Kim. As Oscar’s parents, they’ll need to rely on each other in these difficult moments.

Later, Kim will divulge a crushing secret. She was collaborating on a case with Terry (Cassandra James) not too long ago. It’s possible that was Oscar’s blood work. Is the teen battling some mysterious illness? Is it something genetic that Kim feels guilty about passing on? Regardless, Kim will need plenty of support to get through this.

Fortunately, Oscar will be OK for now. He’ll make a sweet deal with Josslyn (Eden McCoy), so they may agree that they’re in this together. Joss might offer another apology for being rude to Oscar recently. She’s been a bit of a mess, but she’ll want to regain her composure and focus on doing whatever Oscar needs.

Cameron (William Lipton) will get some sad news, so that could involve Oscar, too. He’s not besties with the guy or anything, but they do know each other. Cameron also realizes how much Oscar means to Josslyn. He won’t want to see her in pain over Oscar’s predicament.

Back with Drew, he’ll spend some time catching up with Sam (Kelly Monaco). She’ll support her ex as he copes with Oscar’s condition and tries to recover. As for Jason (Steve Burton), he’ll get caught in the middle of Sonny (Maurice Benard) and Carly’s (Laura Wright) feud. Jason won’t want to take sides, so he’ll hope to be as neutral as possible.

Elsewhere, Ava (Maura West) will prepare for the worst possible outcome. Despite his suggestion that he wouldn’t, Ava may fear that Griffin (Matt Cohen) will blab about the blanket. She should probably cover all her bases just in case.

Other General Hospital spoilers say Jordan (Vinessa Antoine) will catch Curtis (Donnell Turner) off guard. Will she want to postpone the wedding over Stella (Vernee Watson) issues? GH fans can expect Curtis to get fired up, so maybe he’ll fight to keep his nuptials on track.

General Hospital has some thrilling scenes in store, so stay tuned for a great week of episodes. We’ll give you updates as other GH details emerge. Stick with the ABC soap and don’t forget to check CDL often for the latest General Hospital spoilers, updates and news.