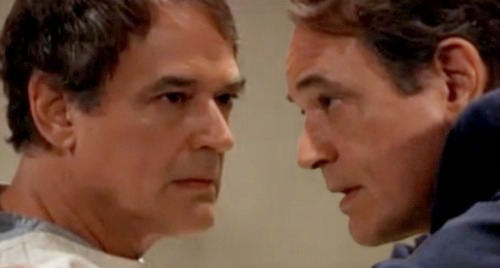 General Hospital spoilers tease that when it comes to Kevin (John Lindstrom), things may not be what they seem. Viewers have seen the mystery patient who was in the room next to Carly’s (Laura Wright) at Ferncliff and he looks just like Kevin!

Of course, Kevin’s got an evil twin, Ryan (John Lindstrom), so many have speculated that the mystery patient is in fact Kevin and that Ryan has taken his place in the world while holding Kevin captive. That would make perfect sense considering that Kevin’s the upstanding twin and Ryan’s the psychopath.

If that’s the case, then it means that Ryan survived the horrific fire that everyone thought killed him, and it means that Laura (Genie Francis) likely married Ryan, depending on exactly when Ryan decided to take over Kevin’s life.

It would also mean that Ryan has done a darn good job projecting all aspects of Ryan’s personality for a considerable length of time. In the world of soaps, though, these things are entirely possible.

But what if there’s a bigger twist to this story? What if the man being held at Ferncliff is actually Ryan who is being held against his will by Kevin? It wasn’t that long ago that fans were speculating that Kevin may suffer from Dissociative Identity Disorder (DID – multiple personalities) due to the trauma he experienced during his childhood.

What if Kevin’s got an evil personality that has taken over and decided to “punish” Ryan for his past misdeeds? Maybe Kevin (or whichever personality is operating as “Kevin” right now) found out that Ryan survived the fire and decided to lock him up permanently to spare society from his evil ways.

Kevin would probably need help to do that, but it’s possible that the higher-ups at Ferncliff are in on the plot. Perhaps Kevin offered Ryan as a permanent test subject for Dr. Lasiris’ (Casey Biggs) experiments in exchange for holding him captive. Could happen.

At any rate, it will be fascinating to see this story unfold and find out exactly which twin is the mystery patient. Who do you think is actually locked up in Ferncliff? Kevin or Ryan? Stay tuned to the ABC soap and don’t forget to check CDL often for the latest General Hospital spoilers, updates, and news.