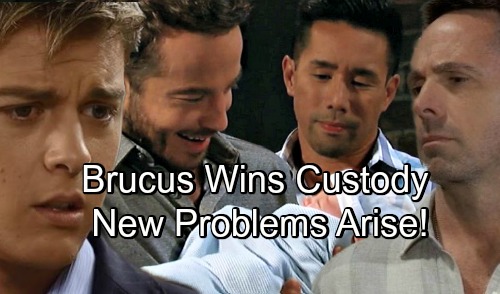 General Hospital (GH) spoilers tease that Brad Cooper (Parry Shen) and Lucas Jones (Ryan Carnes) will get a pleasant surprise. They’ll come out on top when “Wiley’s” custody case is decided. After the birth mom withdraws her demand for the kid, the judge will rule in favor of Lucas and Brad. They’ll be declared the legal parents, but they’ll still worry that the birth mom could change her mind again.

Fortunately, Alexis Davis (Nancy Lee Grahn) will have good news. She’ll assure these dubious dads that they can relax. This ruling will be official and set in stone as far as Alexis is concerned. The birth mom will no longer have parental rights, so “Brucas” can breathe a long sigh of relief. Lucas will feel like their problems are finally over, but Brad will know better. He’ll have some secret fears to battle.

Thanks to Julian’s (William deVry) plan, the birth mom will no longer be an issue. The biological father, on the other hand, could still pose a threat! GH fans will recall that Nelle Benson (Chloe Lanier) swapped her baby with Brad’s deceased one. Michael Corinthos (Chad Duell) thinks Jonah is dead, but he’s really being raised by Brad and Lucas. That shocker has to erupt sooner or later.

General Hospital spoilers say Brad will try to enjoy his custody win, but it’ll be tough with all that guilt hanging over him. It’ll keep eating him alive as he watches Michael struggle emotionally. Lucas will notice that Brad doesn’t seem truly happy. Brad could blame it on his birth mom anxiety before, but he won’t have much of an excuse after their victory.

This could become a bigger deal as time goes on. It could lead to tension and distance, especially since Brad will mull over breakup worries. He’ll fear that Lucas will divorce him if the truth ever comes out. Brad will also know that to keep this quiet, he’ll have to live with the lie forever. As regrets and pain take a toll, Brad will wonder if that’s really something he can do.

However, legal ramifications are certainly a possibility as well. This could even sabotage Lucas and Brad’s future chances at adoption. There’s just so much at stake. Brad will ultimately determine that he’s in too deep, so he has to keep the lie going. He just won’t see any other to handle this mess.

Of course, Nelle herself may cause chaos down the road. She could easily topple Brad’s house of cards and tell Michael the truth. Nelle might use that info as a bargaining chip to get off the hook. If not, she may just want to create another Port Charles explosion! Nelle’s always up for some pot-stirring.

Lucas and Michael are uncle and nephew by adoption. When Wiley’s true identity comes out, will this set off a family feud over custody? Will Lucas split from Brad and relinquish custody to Michael? Could they work out a shared custody agreement instead? There are plenty of ways for GH to take this storyline.