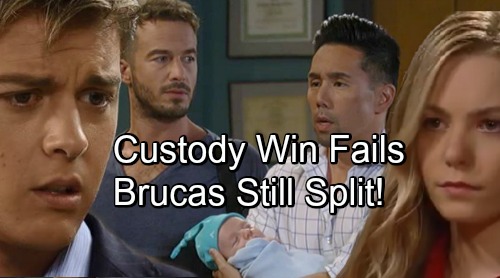 General Hospital spoilers tease that the baby switch drama is far from over. Brad (Parry Shen) has been a wreck lately, and for good reason. He’s smack dab in the middle of a terrible situation that’s nearly all his own doing.

After his newly adopted baby suddenly died, he and Nelle (Chloe Lanier) switched babies, allowing everyone to believe that Michael (Chad Duell) and Nelle’s baby died and Brad’s baby was happy and healthy.

It seemed like a good idea to Brad at the time. He really wanted a baby, and he knew that Lucas (Ryan Carnes) did too. Plus, Brad wanted to spare Lucas the pain of losing their baby. So, when Nelle suggested that she and Brad switch babies, Brad agreed.

But Brad didn’t really think ahead to the problems that the baby switch might cause. First, he wasn’t counting on the birth mother coming back and demanding her baby back. Brad’s been beside himself with worry over the prospect of being forced to give the birth mother a baby that’s not really hers.

Fortunately, General Hospital spoilers say the birth mother situation will get resolved soon in Brucas’s favor, which should help Brad to calm down a bit. But Brad is still going to have problems going forward. He’s wrecked with guilt every time he sees Michael, who GH spoilers say will have a difficult time coping with his baby’s death.

Knowing that Michael’s son is really alive and that he’s responsible for Michael’s pain is going to eat away at Brad’s conscience, and it’s probably only going to get worse over time.

General Hospital spoilers say that Brad’s guilt will continue to cause him angst, and that it will start to affect his relationship with Lucas. Secrets and lies aren’t good for relationships, and the truth usually comes out in the end. Lucas is going to know that something’s wrong with Brad, but he won’t know what it is. Look for a divide to form between Brad and Lucas.

Of course, at some point, GH spoilers predict that the truth will come out about the baby switch, and Brucas will have to deal with the fallout. Can you imagine Lucas’ reaction when he finds out that Brad kept him in the dark about his son’s death and switched out babies?

Do you think that the baby switch drama will ultimately be the death knell of Brucas? Stay tuned to the ABC soap and don’t forget to check CDL often for the latest General Hospital spoilers, updates, and news.