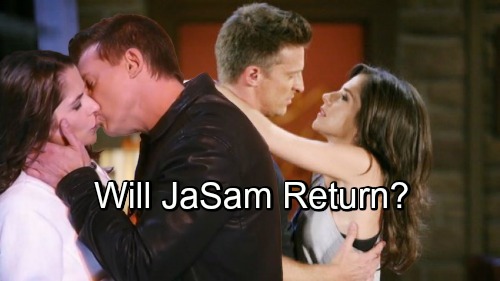 General Hospital (GH) spoilers tease that an iconic hot couple’s reunification is on the way – but how will this happen and what will be the resulting status of JaSam needs to be explained. It has been almost a year since Jason Morgan (Steve Burton) returned to Port Charles. Sam (Kelly Monaco) and Jason’s relationship has been rocky at times since. Have they been apart too long to be the super couple they once were?

After six years, what are they waiting for? Jason hasn’t been with another woman in all this time. The man must have nerves of steel to be this patient. JaSam fans, however, are less patient. General Hospital viewers who are not Dreamers are very anxious for a reunion.

All GH fans knowJaSam was a slow burn. Sam and Jason never rushed into anything. Their last reunion took over two years to happen. For JaSam fans, every minute of angst was worth it as they loved that the actors were allowed to pace the romance.

Both Kelly Monaco and Steve Burton wanted JaSam to seem real. The work that these actors put in paid off. Jason and Sam never lost their super couple status whether together or not. The 2009 Mexico reunion certainly did not disappoint.

What Do JaSam Fans Want?

Gh fans want some action. Waiting for Sam to make up her mind is getting tiresome. Jason’s patience is stretched beyond belief. Fans want Sam to show some interest in Jason. Sam has been unmoved by Jason’s return for too long while Jason is longing for Sam.

Jason has been giving Sam time to decide what she wants. General Hospital needs Sam to show that she is as invested as Jason is to make up for her initial indifference toward Jason when Patient 6 returned. GH writers need to show that Sam wants Jason as much as he wants her.

Is it time for Sam and Jason to embark on a adventure. Sam and Jason have worked together for years. JaSam fans always enjoyed that. Fans want romance. Jason cooking dinner for Sam. Molly and Kristina setting up dinner dates. A family getaway. A trip to Noodle Buddha. A visit to their honeymoon cabin. A trip to Sonny’s island. Sam in her stripper outfit!

Something more than these short scenes since Jason’s return. JaSam fans want the desire to be together. They want the little accidental electrified touches. JaSam always got to the point of awkward before a reunion. Fans want that connection, that desire. Sam and Jason need to show that pull toward each other.

In order for a revived JaSam to work on screen fans to be pulled into the romance. And finally, GH fans need JaSam to make love. Jason and Sam have never had an in-depth love scene on screen. Yes, General Hospital must deliver what fans want if TPTB expect JaSam to work, and frankly, they want it now!