General Hospital Spoilers: Will Jason and Sam Expand The JaSam Family With Another Child? 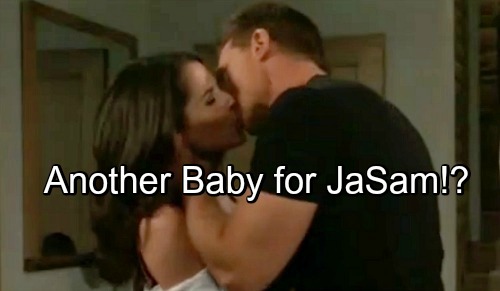 General Hospital (GH) spoilers tease that things are heating up between Jason (Steve Burton) and Sam (Kelly Monaco). The two recently had a steamy makeout session after spending some time bonding over Danny’s (T.K. Weaver) castle-building project. They were clearly enjoying each other’s company, just as they had enjoyed their family time with Danny beforehand.

And it looks like Jason and Sam will continue to be drawn to each other in the coming days. GH spoilers say that they’ll kiss again and be on the verge of making love when they’re interrupted by Drew (Billy Miller), who will drop by Sam’s place for emotional support as he deals with Oscar’s (Garren Stitt) tragic situation.

So, it certainly looks like the two are getting closer toward rekindling their relationship. And it’s pretty clear that it’s about more than a rekindled physical attraction between them. We’ve seen quite a bit of family interaction between Jason, Sam, and Danny recently. Family bonding seems to be what’s drawing Jason and Sam closer.

If Jason and Sam do get back together, do you suppose that the plan is for the couple to have another child together? It’s clear that they along with Danny make a great family unit, and Danny may want his parents to have another baby. But would Jason and Sam be up for it at this point in their lives?

It would be nice to see Jason and Sam have a baby under “normal” circumstances; that is, without baby-switching or other such drama involved. A nice, healthy pregnancy and easy delivery for this couple would be fun to watch, don’t you think?

It sure looks like a “JaSam” reunion will be happening soon. Do you think an expanded family is in the cards for these two? Stay tuned to the ABC soap and don’t forget to check CDL often for the latest General Hospital spoilers, updates, and news.