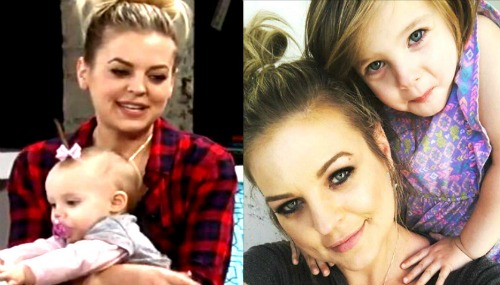 General Hospital (GH) spoilers reveal that Spinelli (Bradford Anderson) is back in town and he brought a special visitor with him. During a chat with Jason (Steve Burton), Spin revealed that he thought it’d be good for Maxie (Kristen Storms) to spend some time with Georgie. He brought their daughter to Port Charles to bring Maxie some joy.

Maxie has had it rough since Nathan (Ryan Paevey) died, so seeing Georgie should lift her spirits. Of course, it’d be nice if GH would let us see their visit on screen. If General Hospital decides to do that, they’ll need a little girl for the role. Could Kirsten Storms’ own daughter reprise her role as Georgie? It would certainly be a cute moment for fans.

Storms gave birth to Harper Rose Barash on January 8, 2014. If that last name sounds familiar, it’s because Harper’s father is Brandon Barash. GH fans will recall Barash’s portrayal of Johnny Zacchara on the ABC soap. Barash and Storms are no longer together, but they’re great co-parents to their beautiful daughter.

Harper played Georgie for a few months in 2015, but she was replaced by Lily Fisher in January of 2017. There’s no word on why the switch happened, so it’s possible that Harper wasn’t available or the show wanted a slightly older actress who’d be easier to handle. Whatever the case, more time has passed and this might be an excellent opportunity for Harper to return.

There’s always something fun about real-life family bonds on a soap. On The Bold and the Beautiful not too long ago, Scott Clifton’s son played his character’s little boy in a fantasy. The move got a lot of buzz, so GH could generate some with this casting news as well. General Hospital viewers love this sort of thing. It’d be awesome to see Storms talking and cuddling with her actual daughter.

Do you think we’ll get a glimpse of Georgie while she’s in Port Charles? Will Harper Rose Barash make a comeback in the role? General Hospital spoilers say some surprises are in store, so let’s hope this is one of them! We’ll give you updates as other GH details emerge. Stay tuned to the ABC soap and don’t forget to check CDL often for the latest General Hospital spoilers, updates and news.