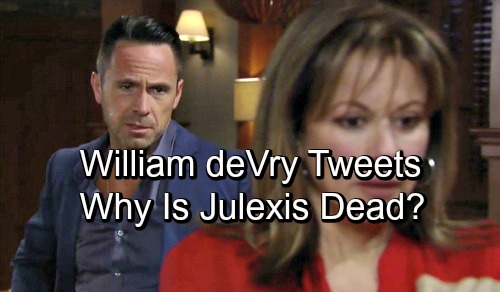 General Hospital (GH) spoilers tease that one soap star is speaking out against angry viewers. GH fans are always passionate about their favorite couples, but sometimes they cross the line. It’s never fair to target actors over the characters they play or the pairings they’re in. Alas, that doesn’t stop people from doing it anyway. William deVry (Julian) is the latest Twitter user to face vicious attacks.

Julian and Alexis (Nancy Lee Grahn) were a popular duo on GH, but they haven’t been together for quite a while. Unfortunately, some “Julexis” supporters have been blasting deVry in his Twitter mentions. He eventually had enough of all the hate, so he decided to speak out on the matter.

It turns out deVry had already been blocking plenty of rage-filled viewers. Why wouldn’t he? Twitter should be a fun way for General Hospital stars to connect with fans. When it becomes tweet after tweet of fury, it certainly isn’t fun anymore. Some GH watchers complained about being blocked, but deVry set them straight on the reason why.

“Listen. Some of you think i block u cause i don’t love #Julexis ? That is preposterous. Look in the mirror. Your hateful or misguided tweets r what get u blocked,” deVry said. It’s great that deVry is shutting out people who choose to be rude and cruel. There’s no point in going that far over a fictional TV show.

Naturally, deVry also wanted to clear up his opinion on “Julexis.” It turns out he’s a fan of the pairing as well, but it’s over and he’s just rolling with whatever he’s given. “I NEVER wanted #Julexis to go away. Never. But it did. I continue to do my job,” deVry said.

Sadly, the Twitter drama continued despite deVry’s best efforts. Some fans accused him of not wanting to work with Nancy Lee Grahn. Others complained about deVry promoting Julian’s newer pairing with Kim (Tamara Braun). That led to a very cryptic comment.

“And if u knew half the truth about why no Julexis maybe u would cut me a break,” deVry said. Hmm…what does that mean exactly? It looks like deVry’s going to leave it a mystery, but it’s definitely interesting. There must be some behind-the-scenes issues that DeVry would rather not discuss.

All of this suggests that a “Julexis” reunion isn’t on the horizon. Never say never on a soap, but it’s obviously not happening anytime soon. Instead, General Hospital spoilers say the focus will be on Kim, Julian and Drew (Billy Miller). Once Drew gets his memories back, this triangle should really heat up!

How do you feel about William deVry’s Twitter reaction? Do you miss “Julexis” or are you fine with Julian and Kim? We’ll give you updates as other GH news comes in. Stay tuned to the ABC soap and don’t forget to check CDL often for the latest General Hospital spoilers, updates and news.