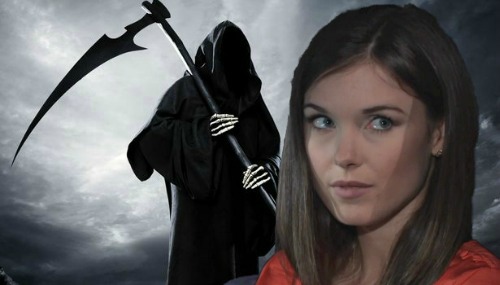 General Hospital (GH) spoilers tease that Michael (Chad Duell) and Willow (Katelyn MacMullen) will cross paths soon. In fact, they may have already caught a glimpse of each other at the bereavement meeting. Michael finally admitted that he was in need of some help. He opened up to Carly (Laura Wright) about how hard he took Jonah’s “death” and how he had to get some guidance.

Willow seemed equally distraught over her own loss. She’s obviously drowning in grief as well, so that’ll be a reason for Michael and Willow to connect. Since Michael plans to attend more of these meetings, there’ll be plenty of chances for them to interact. General Hospital spoilers they’ll do just that soon. They might even go out for coffee or a drink after a particularly rough group session.

If Michael hears Willow open up, he’ll undoubtedly be drawn to her. Michael will inevitably sense a kindred spirit and want to grow closer. Likewise, Willow may want someone she can share her sorrow with. These two could possibly inch toward a romance or at least a solid friendship.

However, there may be another reason GH is bringing them together. Since Wiley’s birth mother still hasn’t been revealed, Willow is a contender. Julian (William deVry) may have poured out the story he knows, which is that Brad (Parry Shen) swapped babies with a woman who couldn’t take care of hers.

Brad kept a lid on Nelle’s (Chloe Lanier) involvement, so she won’t be a factor just yet. It’d be interesting for Willow to mourn for her baby while Michael mourns for the one who replaced him. Naturally, there’d be many opportunities for clues. Michael could close in on the baby switch truth, but perhaps General Hospital will snuff out his shot – for now at least.

After all, Willow’s hanging around GH and there’s a serial killer who works there. What happens if she gets in Ryan’s (Jon Lindstrom) way? Willow could even become a patient of “Kevin’s” and land in more danger. General Hospital might let Willow fit all the puzzle pieces, but she probably wouldn’t be able to blab. Ryan might murder Willow before any shocking secrets come out.

GH will want to rack up several victims and show Ryan is a true menace. Liz (Rebecca Herbst) and Franco (Roger Howarth) will also face some losses soon, so Aiden’s (Jason David) teacher may be one of them. That could certainly affect Aiden and his behavior, which would lead to another chapter of “Friz’s” story.

Do you think Willow will be killed off? Will she nearly play a role in exposing the baby swap? Will Ryan murder Willow and prolong the drama? We’ll give you updates as other GH news comes in. Stay tuned to the ABC soap and don’t forget to check CDL often for the latest General Hospital spoilers, updates and news.