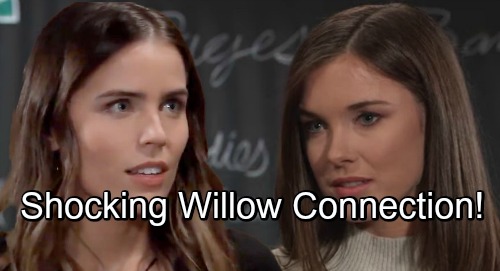 General Hospital (GH) spoilers tease that a surprising character will connect several Port Charles residents. GH fans recently saw Katelyn MacMullen debut as Willow Tait. If you thought she was just going to pop up as Aiden’s (Jason Davidson) teacher, then think again! Willow will become a much bigger part of the story than anyone anticipated. In fact, Willow will be tied to almost all major plots.

Of course, Ms. Tait will remain involved in Aiden’s issues. Liz (Rebecca Herbst) and Franco (Roger Howarth) attended a conference with Willow, so they’re in the loop and trying to solve the mystery. Liz doesn’t understand why Aiden wouldn’t want to go outside with his classmates. She wondered if Aiden interacted with Charlotte (Scarlett Fernandez), but Willow admitted they weren’t close.

It turns out that may have been a crucial clue. Is Charlotte behind some bullying? She seems like a sweet kid, but perhaps she’s on her best behavior around adults. Around a target like Aiden, Charlotte could be a little monster. Then again, Charlotte could simply be a key player in exposing the problem. Liz and Franco might seek the help of Charlotte’s parents for that.

Regardless, General Hospital spoilers say Valentin (James Patrick Stuart), Lulu (Emme Rylan) and Nina (Michelle Stafford) will soon have a Willow link. She’s probably around the same age as Nina’s daughter, so there’s always a chance GH will pull off a twist. It’s worth keeping an eye on the situation, especially since it was too easy for Curtis (Donnell Turner) to find Sasha (Sofia Mattsson).

As if that wasn’t enough, Willow will have a couple more connections. General Hospital spoilers say Chase (Josh Swickard) and Michael (Chad Duell) will cross paths with the teacher. Will this turn into a new love triangle? That’s one possibility to consider. Another one might be some baby mama drama. Could Willow be the mysterious birth mom who gave up “Wiley” for adoption?

There’s no word on Willow being linked to Brad (Parry Shen) or Lucas (Ryan Carnes), but maybe that could come into play down the road. Whatever the case, Willow may have some secrets – or at least a way to expose the secrets of other characters. GH viewers will be anxious to see what’s in store.

Willow is aptly named since she’s branching off into so many stories. How will this shocking puzzle fit together? We’ll give you updates as other news comes in. Stay tuned to the ABC soap and don’t forget to check CDL often for the latest General Hospital spoilers, updates and news.