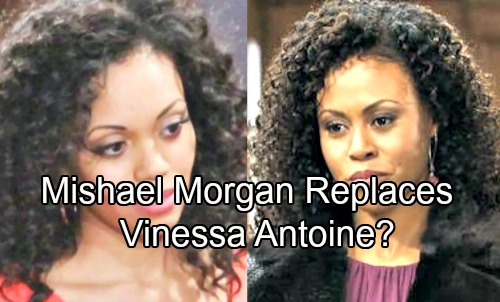 General Hospital (GH) spoilers tease that the casting shakeups will continue. The soap world has been filled with major departures lately. The most recent one is Vinessa Antoine’s looming exit as Jordan Ashford. Antoine wanted to stick around and keep playing Jordan, but her latest project in Canada made that too difficult to work out.

GH didn’t like the idea of Jordan staying off canvas that long, so they’re going to recast. Of course, a casting call already pointed in that direction. Earlier this month, General Hospital sent one out for “Jessica.” Based on the description, it’s pretty clear that it’s actually for Jordan.

According to Soap Opera Digest, the show wants a 30-something African-American actress. This character’s said to be “strong, smart & savvy.” She also knows how to play both sides of the law, so Jordan’s an easy fit here. GH viewers know Jordan usually plays by the rules, but she’s willing to bend them when necessary.

General Hospital is on the hunt for the next Jordan, so it’d be great if they could find someone familiar to soap fans. GH’s executive producer, Frank Valentini, definitely likes to snatch up daytime drama alums. As luck would have it, Mishael Morgan recently wrapped filming on The Young and the Restless. It won’t take long for her Y&R character, Hilary Curtis, to finish off her time on screen.

Morgan would be absolutely perfect as Jordan. She could slide right into the role and make it her own. There’s a slight hiccup since Morgan is pregnant in real life, but who says she has to jump in right away? It’d actually be better to have some time between the two versions of Jordan. That strategy always makes recasts less jarring for fans.

Let’s say Stella’s (Vernee Watson) friend, Chandra, comes to town and derails the “Jurtis” wedding. There have also been hints about Jordan potentially losing her job, so that could happen as well. Jordan could eventually leave Port Charles to do some soul-searching and return with a brand-new face.