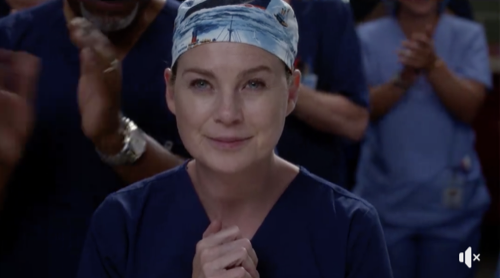 Tonight on ABC their hit drama Grey’s Anatomy returns with all-new Thursday, 8 February 2018, season 14 episode 12 and we have your Grey’s Anatomy recap below. On tonight’s Grey’s Anatomy season 14 episode 12 called “Harder, Better, Faster, Stronger” as per the ABC synopsis, “April is in charge of the new Grey Sloan Surgical Innovation Contest, and the doctors are eager to start their projects. Meanwhile, Catherine’s old friend has a shocking idea for Catherine and Jackson; and Meredith treats a returning patient who inspires her project.”

April still wasn’t back to her old self. She had sort of thrown herself into a no-strings attachment arrangement with one of the interns and was hungover at work more than usual, but there were still two things that she did take seriously. Her daughter Harriet and this surgical innovation contest. The contest was all anyone at the hospital was talking about and so April carefully came up with guidelines she hoped they’d all respect. She told them that she wanted a written proposal from everyone entering before they could be considered. She explained that an approved proposal could lead to them becoming a semi-finalist in which they’d received partial funding to carry out their project. And depending on how their project turns out, they could win the contest and receive the full five million dollars.

Everyone, however, had wanted to try their hand at winning that five million dollar. That amount of money devoted towards their research could open doors for all of them and so everyone was doing their best to win this contest. Even if they had to pair up. The interns had all tried calling the dibbs on the attendees and naturally there was a bidding war for Meredith. Meredith had been the last person to win the Harper Avery Award and so everyone had assumed she had another great idea when in actuality she had been stumped. Meredith had later talked it over with Richard and she didn’t know what she wanted to do for the contest. She couldn’t think of a single thing and was about to give up on herself when a case literally fell into her lap.

Meredith’s former patient Judy had come back in complaining of stomach pains and at first, Meredith couldn’t understand why. She had literally removed Judy’s spleen during a complicated surgery where she had no lighting and had been forced to use an intern as blood bag though Meredith asked that Judy receive a scan to find out what was going on and what she found shocked her. She had seen that Judy’s body had recreated several spleens in the space where her original spleen was removed and that was something no one had ever seen before. It was so incredible that Meredith had gotten the idea from it and was slowly starting to work on her research proposal while the others were all left running around for that great idea.

Jackson, for one, had been approached by another famous plastic surgeon that had an idea she wanted to pursue with both Jackson and his mother, but there was an unwritten rule between Jackson and Catherine that stated they wouldn’t work on any case involving the human genitals and that’s the rule their friend wanted them to break. She had thought up of another way of performing vaginal plasty in which transwomen as well as women that have been affected by birth or cancer – could all receive vaginas that were more realistic and that would allow them to truly enjoy any and all vaginal experiences. So the doctor believes her idea what cutting-edge and she wanted her friends to take part.

Catherine was all for the idea because she had wanted to help women that did need the procedure while her son wanted nothing to do with it. Jackson kept refusing to do the project with his mother because he didn’t want to be around her as she talked about genitals and he also said there was an already successful out there for such women. The vaginal plasty has been done before and Jackson didn’t think he should “waste” his time on that project when he had another project that he did want to pursue. He’s been doing his research and he believed that he could revolutionize spray on skin. It could be used to treat burn victims or those born with defects and it could change plastic surgery forever so he wanted to pursue it.

Catherine, on the other hand, had wanted Jackson to do her project and so kept trying to convince him till he eventually reconsiders his initial “no”. Jackson had tried talking it over with Meredith and she hadn’t been sympathetic at all. She told him that he had two really great ideas and that even if there was a gender affirmation surgery already out there that it didn’t change the fact that it affected seventy-five million people which were something that Jackson hadn’t thought of until she said. He had only thought of the surgery in percentage and hadn’t turned that percentage into actual people. Therefore, Jackson wasn’t too upset when he learned that his mother had convinced his intern to do two papers. One for his proposal and one for her proposal.

Jackson had looked it over and had realized he truly did have two great options. So he delivered his paper on the project with his mother around the same time Meredith delivered hers. She had used Judy’s condition to regenerate other her organs as an idea of regenerating other organs in the lymph nodes and even Richard had come up with an idea. He had thought up of a “magical” stick that surgeons could use to immediately identify cancerous tissue upon contact and that along with the other projects proved to be a truly great year for innovation. Everyone had come up with something and Arizona had even reconciled with Carina who was working with her on lowering the mortality rate for women with preeclampsia.

So it was a win for almost everyone when most of the papers were later approved for the initial grant, but Amelia and Alex’s proposal hadn’t been approved. The two had thought of a way to remove a tumor without removing any brain tissue and they had wanted to use this idea on a young patient that would lose her voice as well as her dream of one day singing on Broadway yet their proposal wasn’t approved and so now they don’t know what to do to help their patient.