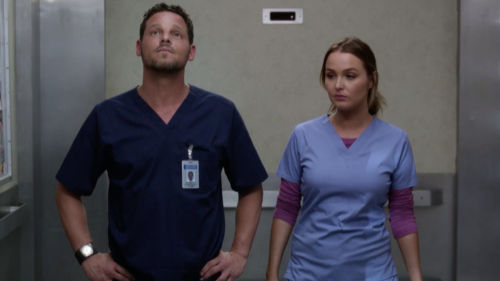 Tonight on ABC their hit drama Grey’s Anatomy returns with all-new Thursday, March 15, 2018, season 14 episode 15 and we have your Grey’s Anatomy recap below. On tonight’s Grey’s Anatomy season 14 episode 13 called “You Really Got a Hold on Me” as per the ABC synopsis, “Meredith tries to learn more about Marie Cerone’s history with her mother. Meanwhile, Jo is applying for fellowships around the country and it throws Alex for a loop; and Tom Koracick helps April acknowledge her crisis of faith.”

Meredith tried to figure out her “Aunt” Marie’s story on tonight’s all new episode of “Grey’s Anatomy”.

Meredith had looked through all of her mother’s diaries and she found several mentions of Marie. Marie was this great friend and it seems she had tried to warn Ellis away from a relationship with Richard however, as Meredith knew, Ellis would ignore her friend and risked everything on Richard. Richard was married at the time and he had promised to leave his wife only he never went through with it. He chose instead to end things with Ellis and so Ellis eventually gave up their daughter for adoption. Ellis hadn’t wanted to raise another child alone because raising Meredith by herself at the time had been hard enough and so Meredith wondered if the entire affair with Richard was what came between her mother and Marie.

Marie could have been in love with Richard and that’s why she had tried to warn Ellis off him or Marie could have been in love with Ellis. Meredith wasn’t sure what could have happened and so she questioned if there had been another love triangle she hadn’t known about even as she ignored what was going on with Maggie. Maggie hadn’t told her sister about what happened with Jackson and so Meredith had assumed her off behavior had something to do with Clive. Clive had been Maggie’s boyfriend until she found out he had actually been married and Maggie hadn’t been all that upset. She had all started to see Clive to forget Jackson and now Jackson was an option for her, but Maggie didn’t know how to tell anyone or even react.

Maggie had gone to the hospital and she had told everyone about the innovative procedure she was going to be doing that day yet she would fall apart when she saw Jackson. Jackson had merely been in the area and that had been enough to fluster Maggie. She had spilled her coffee everywhere and he had tried to help her except being around had been too much for her. Maggie didn’t know how to process her feelings and so she tried to hide behind her work. That innovative surgery that she was supposed to be doing was on a teenager and that same morning she found out that her surgery was no longer needed because the teenager didn’t need a surgery to prolong his weakened heart. He had been offered a fresh heart thanks to the donor list and so Maggie had to let go of her surgery.

Maggie was still disappointed she couldn’t go through with it though she had gotten over her disappointment easily enough because her patient’s new heart was a miracle. The teenager was named Charlie and he had been on the list for a new heart for the last three years, so his mother had been excited about the heart and Charlie’s boyfriend had been excited about the heart. It’s just Charlie hadn’t wanted the new heart. He said he wanted to go ahead with Maggie’s surgery which would only prolong things rather than fix them because he hadn’t wanted to let go of his own heart. That heart was apparently same one that fell in love with Henry and so Charlie hadn’t wanted to take the risk that he would stop loving henry because of a new heart.

Maggie and the other doctors had tried to tell Charlie that a new heart wouldn’t change things and that he should take the new heart, but he hadn’t wanted to listen. He told them that he wanted to keep loving his boyfriend and so the doctors were forced into discussing what would happen if he chose to reject this new heart. They told him that he would be removed from the donor’s list and he would most likely die in a few years. Charlie had listened to them spell out all the horrible things and he still hadn’t wanted to change his mind. He said he loved Henry and Henry would later break up with him. He told Charlie that he couldn’t stay with someone that would reject science and that all this “true hearts and knights” thing was childish.

Henry’s breakup speech had been a little on the cruel side however it had been enough for Charlie to let go of his idea because, as he would tell the doctors, he no longer cared if they ripped out his heart now that it was broken. The doctors had all felt bad about what Charlie had gone through only they were happy he agreed to the heart transplant. The new heart would allow him to live a long life and so they went in surgery thinking about their own first loves. Alex had been in love with a girl before his mother’s mental illness began to make things difficult, Jo had had a boyfriend that hadn’t mind that she lived in her car, and Maggie had remembered an anatomy class with a boy she had a crush on.

Maggie would actually bury a human heart that had been dumped as part of a fake funeral for the two of them because they had needed closure after saying goodbye to their cadaver. Jo and Alex had thought that was pretty weird and had been grateful that Maggie wasn’t weird like that anymore yet they eventually ran into a complication with Charlie’s surgery. Charlie’s new heart was unfortunately too big for his chest and so the doctors tried to find a way around that except nothing they did worked. They kept trying to keep Charlie alive and his surgery had gone so badly that he was touch and go. And that’s how Henry found him. Henry had only broken up with Charlie to get him to do the surgery and he planned on coming back afterwards to try and get Charlie back.

Charlie just wasn’t in the position to do that. He was in critical condition and was being monitored by both Maggie and Alex. Alex had been brooding all day and so Jo had finally had enough after everything they had been through with Charlie, so she asked Alex what was wrong and he admitted that it was her applications. She had been filling out applications for fellowships at other hospitals and she hadn’t taken in consideration that doing so would mean she would be leaving Alex. Alex understood that Jo was free now and that she was excited about furthering her career, but Alex hadn’t thought Paul was the only thing keeping Jo in Seattle and so he had been upset. He thought he wasn’t enough and for someone that’s been abandoned, he hadn’t wanted to go through that again.

Alex had tried talking about the situation with Meredith and Meredith had done her best to reassure him that Jo wasn’t Izzy. Izzy was in the past and Jo was in the now though Alex couldn’t or didn’t want to admit that right away and so he turn the subject back on Meredith. Meredith found out why Marie and Ellis had had their falling out. It turns out that Ellis had worked on a procedure with Marie that she would later claim was all her own doing and completely trampled all over her friend. Marie had been hurt when Ellis hadn’t mentioned or even recognized her work on what was now the Ellis Grey Procedure. Marie told Meredith that Ellis had broken her and that the betrayal was why she left the states as well as gave up surgery.

Marie said that she had been heartbroken that she had gone back to Spain and had started working at her father’s company, so Meredith questioned Marie’s story. She said that Marie could have faked the paperwork that showed she did equal work on the procedure and that she didn’t think her mother would accept her second Harper Avery Award for work she lied about. Meredith wasn’t sure whose story she believed and the only thing she knew was that she couldn’t undo her mother’s legacy. She couldn’t tell everyone that her mother lied about the Ellis Grey Procedure and so she told Marie that she wouldn’t make an announcement that the procedure should actually be called the Grey Cerone surgery. And so she had tried to get Marie to understand that, except Marie didn’t want to understand.

Marie told Meredith that she was going to be taking her polymer and Meredith’s research back to her own company. It was unfair only life was unfair. April had spent the day off at home drunk and with Koracick. Koracick had seemed like a jerk yet he understand April questioning her faith and they were able to talk as well as run away from their problem together, so April had been in a better mood than before when she got Harriet back from Jackson. Jackson meanwhile had finally gone on that date with Maggie that’s been months in the making. It was sweet and awkward just like Maggie and so Jackson had ended up loving the date.