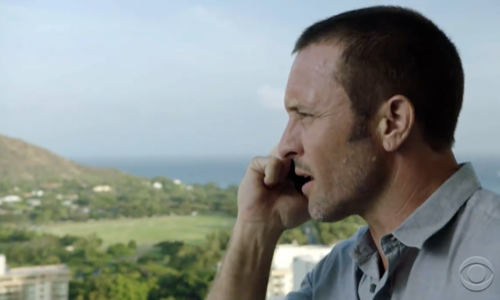 Tonight on CBS Hawaii Five-0 air with an all-new Friday, October 05, 2018, episode and we have your Hawaii Five-0 recap below.  On tonight’s Hawaii Five-0 season 9 episode 2 “The Man Who Fell From the Sky,” as per the CBS synopsis, “A vacationing dad on a flight to Honolulu is kidnapped and forced to parachute mid-flight. Danny, Tani and Junior track him through the jungle to discover that he may not be who he seems. Also, McGarrett is threatened with a secret from his past.”

Someone pulled off the most daring kidnapping in history on tonight’s all-new episode of “Hawaii Five-0”.

Before either McGarrett or Danny had heard about the kidnapping, they had been arguing. McGarrett had come to regret letting Greer go last week after finding out she had been a dirty agent inside the CIA, however, he had little choice in the matter and so it made no sense for him to beat himself up over something he couldn’t change. Danny had even thought McGarrett was whining. He told McGarrett to snap out of it and had wanted his friend to focus on something important. Like the money, he had buried in the backyard. The guys received a loan from their friend Kamekona and they decided to bury it in the backyard because it was safer than the bank only that money wasn’t safe with a dog around.

The dog had dug up the bag and the money had started to blow off into the wind. Junior had realized what was happening and acted fast to catch the money, but Danny got upset and he went on a full “I-told-you-so” tirade that would have gone on and on until they got the call. The guys stopped going on about the money and what McGarrett could do to fix the problem when they heard someone had kidnapped a man from a plane. The plane was still in the air heading when someone pulled a gun and grabbed a guy from the bathroom before they both took off through an airlock door. Luckily, no one else was on the plane was hurt and so all that was left was the mystery. Why was this seemingly innocent man kidnapped from a plane?

The kidnapper could have easily waited until the plane landed before he made his move yet he acted like he had to get to this man and so that’s where Five-0 began their investigation. They looked into the victim and identified him as Jack Teague. He was a Systems Analyst that was on vacation with his wife and child. There was nothing about Teague. He was just this poor sap until the team investigated him and he sounded too good to be true. He coached his daughter’s little league and was super involved. Teague seemed like he was running for father and husband of the year, so it made no sense why anyone would kidnap him until Five-0 learned that Agent Miller had shown up at the airport.

The team got in contact with the CIA and, while they couldn’t get Agent Miller, they did get some answers. They found out that Teague was a Chinese spy. The spy network that McGarrett had helped unraveled had also revealed that Teague was working for them and so the team believed that Teague staged his kidnapping. He must have heard his cover was blown and tried to get away from authorities by pretending he was being kidnapped. It gave him an excuse to leave the plane and it work towards explaining things to his family. The family probably had no idea what Teague was and so Five-0 hadn’t wanted to bother them. They instead went looking for Teague by tracking where his parachute must have landed.

They ran the science of it all and it said that Teague as well as kidnapper would have ended up in the jungle. Only the team went in after Teague and they found out on their own that Teague had killed his kidnapper. The guys had thought the kidnapping was fake until they came across the body of this alleged partner and realized he couldn’t have been in cahoots with Teague. Teague really had been kidnapped and he had killed the man that carried it out, but he hadn’t gone home or tried to contact his family and so Five-0 knew they needed answers from Agent Miller. Miller was the only thing they had to hold onto and they found him hiding out at a hotel. He hadn’t wanted to talk to them and had tried to close the door in their faces except for McGarrett then snuck into his hotel room.

So that’s when Miller cleared everything up. Miller said he suspected that there was a spy in the CIA and that he ran an off-the-books investigation just to find out who was behind the leak. He had put together a small team that only he trusted and had pulled off planting a double agent in the Chinese spy ring. Miller said Teague was one of them pretending to be one of theirs and that after McGarrett had toppled everything, he feared for Teague’s life. Miller was going to wait until Teague came off the plane with his family and move them all to a safe location however the Chinese had gotten wind of what he was doing and they acted first. Miller hadn’t known what happened after that and he said that he sent a CIA team into the jungle to search for Teague. And, well, Danny and his team found those CIA agents.

They had all been murdered! They were killed by automatics and everyone knew that Teague hadn’t had that weapon on him. Therefore, a Chinese hunting team must have also been after Teague. Miller had tried to get to his agent himself afterward and he had gotten killed for it so it had been up to Five-0. The team had used all their resources and, once they caught her, they had leaned on Greer to find out everything she knew. It hadn’t been much but it had been enough to save Teague’s life. Five-0 found him before he could be taken to China and they eventually reunited him with his family.

Teague was going to have to be relocated with his family through the CIA hadn’t mind looking after him once they got their hands on Greer.

Before Greer was handing over, she told McGarrett that the only reason she’s kept his secrets was because they were on the same side and so now it seems like she’s willing to tell the world some of the things they did while they were both just “following orders”.

McGarrett didn’t know what his future would look like if his enemies ever found out what he did on the job and so while he was worried about being exposed, a member of his team was looking into whether or not his friend Adam was a killer…

Adam was the suspect in his sister’s death, after all!