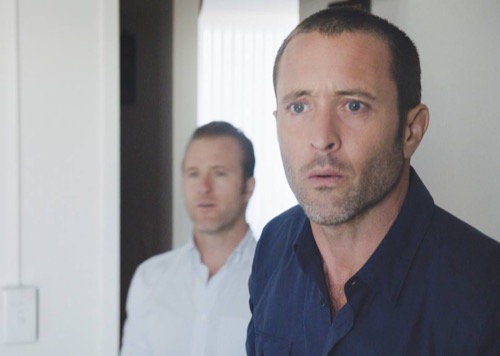 Tonight on CBS Hawaii Five-0 air with an all-new Friday, November 9, 2018, episode and we have your Hawaii Five-0 recap below.  On tonight’s Hawaii Five-0 season 9 episode 7 “Pua a’e la ka uwahi o ka moe (The Smoke Seen in the Dream Now Rises)” as per the CBS synopsis, “McGarrett investigates a cold case from the 1940s, one that his grandfather and Honolulu detective, Chang Apana, worked on, and he tries to deduce how the case could have been solved. Also, McGarrett and Danny get ready for the opening of their restaurant.”

Now, both Adam and Tani were keeping a secret from everyone on tonight’s all-new episode of “Hawaii Five-0”.

The two realized that someone was setting up Adam up to take the fall for his sister’s murder. They could have turned to anyone on Five-0 for help and they didn’t. They instead chose to keep their investigation and no one had been any the wiser. No one had even suspicions when they all went to the grand opening of McGarrett and Danny’s restaurant. The new restauranteurs had worked really hard to achieve a dream that no one else had believed in and so they were allowed to live in the moment, however, there had been on guest there that had been looking forward to meeting McGarrett. McGarrett was introduced to retired HPD Detective Milton Cooper. Cooper had been the best friend of his late grandfather and he had whole stories about the man. He told McGarrett that his grandfather had wanted to become a detective in the HPD.

McGarrett had never heard that story and so he asked for more details. He wanted to know why his grandfather hadn’t been able to live out his dream and Cooper told him how Pearl Harbor had changed everything. McGarrett had served and died for his country. It was in his honor that Milton made sure to become a detective and he had tried to remember one another way. He had tried to close a case they had been investigating. It was about a missing a girl. Cooper and the older McGarrett had tried to solve it because it had been one case the legendary Chang Apena had never been able to solve and unfortunately they couldn’t solve it either.  And that’s why Cooper wanted to meet the grandson because he wanted to give him his grandfather’s old briefcase.

It had all the old case files in it and Cooper thought McGarrett would have better luck closing the case. McGarrett said he would look at it and followed through on his promise later that night. He looked into the case of the missing girl. The first Steve McGarrett and his friend, as well as his partner Cooper, had checked into the last whereabouts of this Lyla that disappeared and as they were investigating someone shot at them. The two were able to walk away from the encounter yet they didn’t forget that someone was willing to kill cops if it meant they could cover up whatever happened to Lyla. So they went to Lyla’s brother. They wanted to know what she had gotten mixed up in and he didn’t know. He knew that she got some work and so the cops looked into that lead.

They learned that Lyla worked at a plantation. Only she wasn’t working out in the fields and so the cops pushed until they found out she was working in the Big House because the owner of the plantation took a liking to her. The owner was Mr. Pettifer and he claimed that he loved Lyla like a daughter. It was why he didn’t want her to do back-breaking work and had even loaned her some money. Being in debt to a man like him could have made Lyla desperate and it was also a motive for Pettifer. Cooper and Steve were talking about it as they were driving and they were discussing everything that could have happened when again someone started shooting at them. They got into a shoot-out and the other car exploded.

The cops never found out who had been behind the assassination attempt. They instead saw a doctor for their wounds and saw someone that might have known Lyla. Lyla was hanging out a club and it turns out she befriended the singer. The singer wouldn’t talk to the cops out in the open and so she met them in the back. She said Lyla was seeing a guy in a fancy new car and before she could tell them the who someone shot her. The singer had enough juice in her to say that the boyfriend’s name was James, but that’s all she said and Steve and Cooper got into some trouble with her death. They weren’t supposed to be poking around in this case and so their captain demanded their turn over their badges because their actions cost a young woman her life.

The captain tried to stop his cops from doing whatever they wanted to do, only taking their badges didn’t deter them and they continued to look into the case during their own time. They looked into a rich young man named James that would have been driving a new car and they found out about James Whitmore. He was young, wealthy, and had a fiancée who didn’t know he was sneaking around with a native girl. James had seemed like the perfect suspect and he would have if he hadn’t died on the same day that Lyla went missing. The cops pulled up James’s old file and he had been killed. Someone shot him and the position he was in indicated that he had been seated when he was killed. He was probably in his new car and so the guys wanted to know that hadn’t been in the file.

The file pretended like James had been killed in the alley and there had been so signs of his car. Someone covered up how he died and the guys thought it must have been James’s father. Whitmore Senior would have wanted to cover up that his son died in a car with a native girl and the guys even figured out who ordered the hit. The hit must have been ordered by a man named Earl Blackstone. Blackstone owned and operated illegal gambling den. He was also in a longtime feud with Whitmore Senior and killed his son in revenge. It explained why Whitmore went after Blackstone following his son’s murder and so if anyone would have answered it would be Whitmore. The guys went to his home with backup and got into a shoot-out before they were finally able to get Whitmore alone.

They told him what they knew and they demanded to know where Lyla’s body was. She must have died with James and so they wanted her remains so that she could be buried properly. They were waiting for Whitmore to answer them when their heard the sirens and Pearl Harbor happened. It brought their investigation to an abrupt end and that’s why they were never able to close the case. Only McGarrett who had been searching through this file and reading it in honor of his grandfather – he solved where Lyla’s body was buried. She was dumped in the Whitmore’s old pool. Whitmore had ordered construction done at his home and he removed any evidence of ever having a pool. And so when McGarrett got a warrant to dig up, they found James Whitmore’s car and the body of Lyla Kekoa.

They later had a funeral for her that both McGarrett and Cooper attended and it got McGarrett thinking.

McGarrett realized that he’s a cop and that he’ll always be a cop, so he told Danny that he didn’t want to run a restaurant and Danny told him that Kamekona had already made an offer to buy them out.