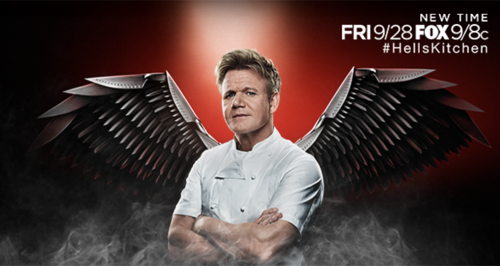 Tonight on FOX their Gordon Ramsay culinary competition series Hell’s Kitchen airs with an all-new Friday, September 28, 2018, season 18 episode 1 premiere and we have your Hell’s Kitchen recap below. On tonight’s Hell’s Kitchen season 18 episode 1 episode called, “Rookies vs. Veterans,” as per the FOX synopsis, “The Season 18 premiere: Chef Gordon Ramsay invites eight previous contestants back to the kitchen to battle against eight ambitious rookies for a chance at a life-changing grand prize: an Executive Chef position at the world’s first Gordon Ramsay Hell’s Kitchen Restaurant at Caesars Palace Las Vegas. In the first challenge, the rookie chefs will cook up the best versions of their signature dishes within 45 minutes, while the veterans will attempt to create the same dishes.”

Hell’s Kitchen begins tonight with Chef Gordon Ramsey and his sous chefs Christina Wilson for the red team and James “Jocky” Petrie for the blue team. The Maitre d for this season is Marino

The 8 Rookies arrive and are greeted by Jocky and Christina, completely unaware that they are sitting across from 8 Veterans in disguise. In the middle of eating dinner, Chef Ramsey comes in, welcoming them all and says all 16 chefs have a different opportunity than ever before, because for the first time the winner will be the executive chef at Gordon Ramsay Hell’s Kitchen Restaurant at Caesars palace in Las Vegas.

The chefs introduce themselves. “Motto” (35) from Baton Rouge, “Gizzy” from Atlanta, Georgia, Scotley from Atlanta, Georgia – apparently him and Gizzy know each other as he took Gizzy’s previous position, but she insists she is better than he is. Chris (25) from Boston, but Chef Ramsey is shocked at how short he is. Kanae (25) from LA. Jose is from the Bronx, Scott (39) owns a restaurant in Cleveland, Ohio. Mia (28) is originally from Puerto Rico but now in Miami; they are all Executive chefs with impressive resumes.

Chef Ramsey turns to the Veterans side of the table and asks them to begin they ambition. Ariel reveals she came in 3rd in Season 6 and the rookies are in for unexpected surprises with the rest. Jen reveals she was 4th in Season 4, promising she let go of her wanker ways! Heather who was runner-up from season 16 is up next. She swears the door is hers this time.

Gizzy calls them “has-beens” and won’t be able to do this.

Kevin who was the runner-up from season 6 is back. Trevor was in the final four of season 8. T was the runner-up from season 14. Bret is also from season 14, he was number 11, but had to leave due to his back injury and was disgusted he had to leave then and finally Roe finished 5th on season 13 is there. Ramsey announces for the first time ever, they are having Rookies Vs. Veterans. Mia feels it is Rookies vs. Losers, so they have nothing to worry about; everyone is ready to do battle and puts aprons on and lines up behind domes.

Ramsey asks them about their signature dishes, but when they lift the lids off their domes, the veterans domes are empty. Instead, they are going to make one of the rookies dishes; he chooses which rookie goes against which veteran. He will be judging the dishes from 1 – 5 and the team with the most points will win the challenge.

First up is the battle of shrimp and grits – Motto (3) vs. T (3). Fish stew and Plantain – Kanae (3) vs. Kevin (5). He tells Kanae says her plantain looks like camel turd. Trev says everyone should be worried about Kevin as he is cut throat!

The battle of herb-crusted black bass is Roe (3) vs. Scott (2). Duck breast with mango puree is up next, which is Chris’ signature dish. Chris (4) vs. Bret (4). Battle of the seared scallops with pasta is up, with the Rookies trailing by 3. Ariel tries to widen the lead, she gets 4. Jose gets 4 on his signature dish. Scotley (3) has pan-seared snapper against Trev (3), although he feels it should have been a 4.

Mia and Jen are up with their grilled pork loin dish. Jen gets only a 2, which is unacceptable to some of her team members. Mia gets a very strong 5 and everyone claps, and she feels she is a force to be reckoned with and now everyone knows that. The teams are tied at 24-24 and it all comes down to the final dish of seared scallops, it is Heather versus Gizzy. She quickly admits her and Andrew don’t speak at all anymore. He tells them both to get back in line before he gives them their points. Gizzy gets 5 points and Heather receives 5 as well.

Now that there is a tie, Chef Gordon Ramsey has to choose who is the best dish of the night, it is down to Mia and Kevin. He ends up choosing Mia from the Rookie team and they win! Kevin is pissed that they lose right off the bat to a bunch of rookies. Their prize is to dine at the incredible restaurant called Charcoal, Chef Ramsey will be joining them for dinner as the veterans will be prepping both kitchens ahead of opening night.

They will be shelling thousands of sunflower seeds, one by one. He calls Christina and Jocky to get the teams to the dorms and tells the rookie team to get ready for dinner. Jen feels Bret is going to be a bit of a wanker and they immediately get off on the wrong foot.

The red team is off to enjoy their win, sitting down to dinner with not only Chef Ramsey but the owner of the restaurant and two-star Michelin Chef Josiah Citrin. He encourages them to stay focused and their eye on the prize.

Back at Hell’s Kitchen, the blue team is hating their punishment with the mushrooms. Jocky doesn’t think he needed to explain to Jen they need to wash the mushrooms before she chops them. She mumbles and Jocky demands to know what she says but she denies saying anything; both Bret and Trev dread how long the night is truly going to be.

Jen is complaining how much Bret is getting on her nerves as they all joke around in the kitchen. The rookies force the veterans to endure their victory song, plus Chef Ramsey rewards them with knife bags.

Outside, as Jen is smoking and Bret shares his tattoos and their meanings, revealing how he lost both his parents within the past 5 months. She tears up saying how proud they are of him and now she feels horrible for the way she was treating him. The phone rings and Chef orders them all into the dining room immediately where bagpipes are playing, Amazing Grace. Chef Ramsey says he has something very shocking for them as they are saying goodbye to someone very near and dear.