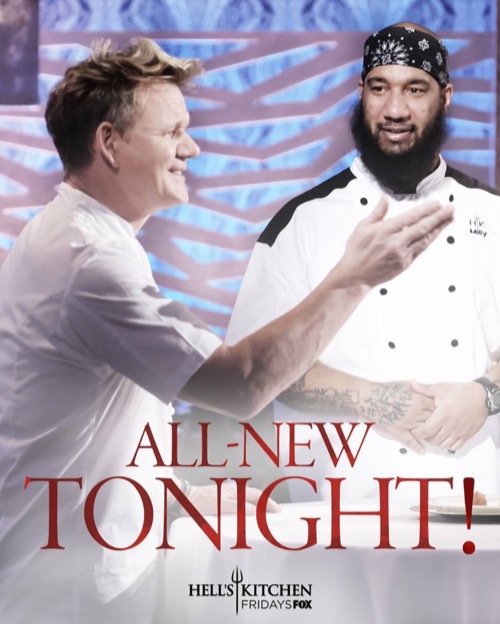 Tonight on FOX their Gordon Ramsay culinary competition series Hell’s Kitchen airs with an all-new Friday, January 19, 2018, season 17 episode 13 and we have your Hell’s Kitchen recap below. On tonight’s Hell’s Kitchen season 17 episode 13 episode called, “Stars Heating Up Hell,” as per the FOX synopsis, “The remaining chefs compete for the coveted black jacket in three challenges, including “The remaining all-stars must instruct athletes to cook their signature dishes—using only verbal instructions. Later, the contestants cook in one kitchen during a dinner service for Wyclef Jean and Matthew Moy.”

Hell’s Kitchen starts tonight with Chef Gordon Ramsay meets the final 5 black jackets in the dining room. He needs to know if they can mentor, instruct and teach if they want to be a head chef in his restaurant, so their challenge is to see if they can TEACH some incredible All-Star students.

The challenge works like this – the chefs will tell their partners how to execute they own signature dish, something they should know extremely well. The All-Star Athletes will be doing all the cooking and the chefs will not be allowed to touch anything; they have 45 minutes to complete their dish. Chef Ramsay says he will taste their dishes, and the team who is still sitting at the end of all the tasting will be the winner.

First up is Nick and Jordyn, they created celery root puree, peppercorn crusted scallops. He says the cook on the scallops is delicious and wishes he could get that cook during service. She shares that she is pretty good at scrambled eggs but that is it. He likes her dish and they take a seat.

Robyn and Reggie present their dish, which is scallops with uni sauce. The pasta is cooked excellent, fresh, clean and vibrant, but the hero of the dish is the scallops. It is a tough one and agrees that it outshines Nick and Jordyn and they take over the throne.

Milly and Ricky bring up their Sea Bass that they cooked three different ways. He loves it and feels it beats Robyn and Reggie.

Michelle and Candace present their dish, they made seared Sea Bass as well with pasta and they managed to take the throne as well.

Benjamin and Shawne are last and bring up smokes lamb loin and roasted cauliflower. The lamb is roasted beautifully and he tells them it is a tough one but it isn’t as good as Michelle and Candace, who wins the challenge and remain on the throne. For Michelle’s win she is going on a tour to see all the breath-taking views of Los Angeles from her very own helicopter; after that, she will dine at 71 Above, a restaurant that is 1,000 feet above the ground. She is given a moment to pick someone and immediately she chooses Nick and they go off.

Today in Hell’s Kitchen, it is deep cleaning day. They are to make sure there is no dirt anywhere. Milly says since he has to clean up the kitchen, and there is leftover food, he is going to sample it all; he agrees that Michelle and Candace killed the dish and deserved to win. Nick says him and heights don’t get along but is glad to be conquering his fears. They talk during dinner and feel they are definitely going to be the final 2 this season and have each other’s back.

In the kitchen, Milly continues to eat while Robyn complains that he feels he is too good to clean up. He refuses to help her at all. He just wants her to stop nagging him.

The final 5 chefs are preparing for their first dinner service together in one kitchen. Milly is flustered, asking Nick to help him as he isn’t set up; Nick feels it isn’t fair that he is relying on him now and Sous Chef James ‘Jocky’ Petrie is upset with him because he already asked him if he was ready and he assured him he was; he tells him to “focus!”

VIP guests like Jonathan Kite and Matthew Moy, actors from 2 Broke Girls arrive. Wyclef Jean (rapper, musician) and two guests arrive for a very special Chef’s table. Milly’s station is already a mess and Chef Ramsay knocks on the counter, telling him that his pan is burning and yells at him to start again. Chef Ramsay gets angry with Milly, saying they are in full service now and no one can be helping him anymore. Nick is on to meat and Milly can do his own appetizers and if he can’t he shouldn’t be there.

Benjamin seems to lose his voice, and Chef Ramsay grabs Benjamin and Robyn’s hands and joins them, telling them they need to work together when his back is turned as there is no countdown happening. When Robyn bring sup her couscous, he says the wheels are already coming off, the food is bland. Wyclef Jean says Chef Ramsay doesn’t play and this is crazy!

Thankfully, Robyn is able to recover quickly, but the next orders are “meat heavy.” Ben begins to say “Oui” to Chef Ramsay again and the chefs remember how much that irritated Ramsay. Ramsay talks to him at the back of the kitchen and tells him the kitchen is too quiet; Benjamin surprised everyone and begins to take control, serving several dishes of meat at once and not one of them was a disappointment.

The kitchen is running on point until Michelle forgets the halibut sauce and then suddenly Nick brings his NY strip up 3 minutes too soon. He refires it and serves it himself. Robyn apologizes because the kitchen suddenly slows down because she is in the weeds. She brings up food but tells Ramsay she didn’t want to send it. He grabs the food and calls all of them into the back pantry; Wyclef Jean wonders where they all went.

Robyn repeats that she told Ramsay she didn’t want to send it and she is sorry if he misunderstood her. He demands her to tell him again what she just said to him. He is pissed that her Brussel sprouts look like rabbit turds; the team encourages Robyn to bounce back. They are onto their last table and everything goes off without a hitch. At the end of service, Chef Ramsay tells them to line up, saying “well done” and they served the entire dining room, faster and with more quality than they had all year. Michelle was the only one who had a flawless service and she is to tal the one-on-one talk with everyone and pick two nominees.

Robyn and Milly step forward, but as Milly is explaining why he should stay; Robyn fights with him, saying everyone holds him up, denying that he is a better chef than her. He says the only time she does good on a station is when she is with someone else. Milly calls her a liar and Chef Ramsay orders them to stop arguing. He tells Milly to come to him and listen carefully and to get back in line. Robyn comes forward, saying at the beginning of the competition she almost left, and since then she has found her voice but she is not ready to be his head chef in Las Vegas. She removes her jacket and thanks him for the opportunity; he tells her to keep the jacket. After Michelle, Nick and Benjamin hugs her, she promises to see Milly on the streets!

“I always admired Robyn’s no nonsense attitude, but tonight she had the wrong attitude and served up a lot of nonsense.”
~ Chef Gordon Ramsay