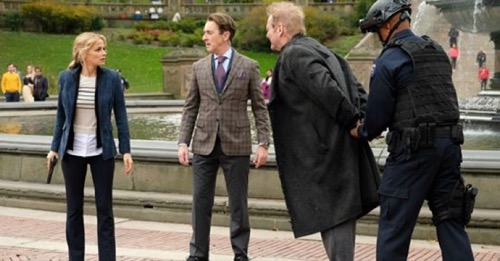 A girl is found dead in a movie theater by one of the workers.

Lizzie meets up with Julian and Dylan walks up. Dylan and Julian are surprised, Lizzie called the meeting because she wants everything in the open.

Lizzie and Dylan head to the movie theater, the victim has no id, just a watch with the name Charlotte engraved on the back. Lizzie says that the cause of death looks like head trauma and surprisingly there is not a lot of blood on her. Lizzie says there is a trail of blood, looks like she wasn’t killed in the theater. All of a sudden a video plays and it is the killer and the victim, he drills into her head and kills her.

Dylan is home with Andrew, they are talking about watching their friend’ 12-year-old daughter, Mattie. Mattie arrives and Dylan tells her that they have planned activities, she says she kind of planned to hang out with her friends. Andrew whispers to Dylan that Mattie is like a cat, they just have to feed her.

Lizzie and Dylan head to Charlotte’s room and find her parents; they ask if they knew anyone who would want to hurt her. Her parents say that she wanted to make movies, but she didn’t like acting and she mentioned that a teacher named Mosher gave her a hard time.

Lizzie and Dylan are walking on campus when they hear a girl scream and run to the sound. They rush into the basement and think a guy is trying to kill a girl with a saw, but it is a movie that they are filming. The guy is actually Henry and Dylan tells him that they are going to have to search his apartment. The girl asks Lizzie what killed Charlotte, she says a drill, the girl reveals that it was supposed to be a drill that killed her character and Henry changed that day to a saw.

Andrew texted Dylan to meet up with him, Mattie was cyberbullying and is now suspended two days from school. Dylan brings Mattie to the station with him. There are photos of Charlotte, Mattie is looking at them and he takes her out of the room.

Dylan and Lizzie question Henry, he says that someone stole his drill and his hard drive from his computer. Dylan asks Henry about some supposed animosity between he and Charlotte. Henry says that even though they competed, Charlotte was very nice. Henry calls Mosher by his first name, Russ, he says that he is not only a teacher but his mentor.

Lizzie confronts Mattie about bullying a boy at school. The boys name is Aiden, Mattie likes him and says she didn’t right the posts about him, she thinks it is Mia and she is the most popular girl in class; if she says something about her she will make her life miserable.

Dylan and Lizzie are discussing the case and Dylan doesn’t think Henry did it. Lizzie and Dylan go to see Mosher and ask why Henry gave him the hard drive, he says to preserve his films. Dylan realizes that Mosher is trying to cover up something. They go look at his computer and it is a video of Charlotte and he in bed, he tells them it is not what they think.

Lizzie pulls emails from Charlotte to Mosher, she was in love with him. Three days ago she threatened to go public with the affair. Lizzie tells Dylan that Mattie didn’t do the cyberbullying, she actually likes the boy.

Dylan goes to see Julian and asks him to hack into Mattie’s cell phone to find out who posted the story about Aiden. It looks like it is a girl named Zoe was impersonating Mattie to bully Adien.

Lizzie tells Dylan that they had to cut Henry loose because there was nothing on his hard drive and Mosher had an alibi.

Mattie is home, Dylan tells her it is Zoe who did the cyberbullying. Mattie is upset, she thought Zoe was her best friend but admits that she has been mean to her lately.

Dylan and Lizzie go see Mosher and ask about Spencer, a student, Mosher says he has no talent. Mosher says he told Spencer he wasn’t getting a grant that was available, it would probably go to Charlotte or Henry. All of a sudden, Mosher gets a video sent to his cell phone, it is the killer and this time he has Henry taped to a chair – the video is live.

Dylan is home with Andrew, Mattie is gone and they both find the house is quiet. They both talk about adopting a child, they both still want to.

Lizzie is at the park, Julian meets up with her and the two kiss.