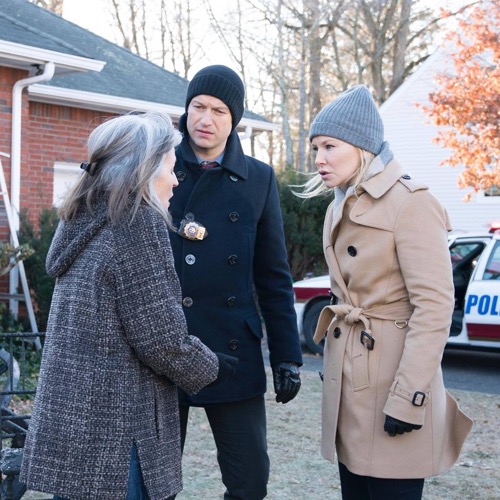 Tonight on NBC Law & Order SVU returns with an all-new Wednesday, January 31, 2018, episode and we have your Law & Order SVU recap below.  On tonight’s Law & Order SVU season 19 episode 12 as per the NBC synopsis, “After a female pundit is assaulted during a protest, Benson (Mariska Hargitay) and Barba struggle to put their political beliefs aside in order to help bring the attacker to justice.”

The show opens with a campus-wide protest where a woman, Martha Cobb is making a speech at an ALT right event. Martha is later found by campus police, barely conscious with her pants around her ankles and blood on her legs. She was hit in the head from behind and raped. Rollins finds a partial sign in the trash near where Martha was found. It has her blood on it. Rollins and Finn are able to find the rest of the sign. It has a common symbol used by a well-known Antifa group.

The team review footage from the protest to see if they see anyone carrying the sign. The group debates Martha’s politics with Rollins take the conservative side and the rest of the team seeming to be more liberal. Olivia gets the DNA results from the attack and it is a match to a well-known Trump hater, Jed. He is arrested and brought to the station.

Martha is released from the hospital and comes in to speak to Olivia. Olivia offers kindness and Martha is rude. She reviews a lineup and identifies Jed from the Antifa group as her attacker. Martha’s tough exterior fades for a moment when she first sees him. Olivia lets Barba know they have a positive ID and they discuss the case. Olivia admits she loathes everything Martha stands for and isn’t confident in Martha’s ID because she said she remembered Jed yelling at her during the rally which doesn’t mean he is the rapist.

Olivia and Rollins interview Martha again at her book signing. They ask her to look at several photos to see if she recognizes anyone else from the rally since Jed may have had help. She hesitates on a picture of Randy Platt. He is a leader of a conservative internet group. Randy has posted several hateful blog items against liberal females. He also encourages violence against non-white people and all liberals in general. Rollins and Cressie go to Randy’s house to interview him but he is not home. His mother lets them in and while they are talking a molotov cocktail is thrown through the window. The fire is easily put out.

Randy arrives home and agrees to go to the station. He tells Cressie he is the founder of Patriots for the America Way, actually the Grand Wizard. Once Randy realizes the team isn’t investigating the attack on his home he immediately refuses to answer any questions and after insulting woman and minorities leaves the station. Olivia informs the team that Randy has previously attack two different women at ALT right rallies. Jed and Martha also tussled during the rally so that could be why his DNA was under Martha’s fingernails. Olivia wants to be sure they can rule Randy out as a suspect. He could have attacked Martha for the bad publicity it would cause for the Antifa group.

Rollins and Olivia interview Martha again and she gives them a video a fan sent from the rally. Meanwhile, Jed’s lawyer uses the media to create more hate between the ALT right and Antifa groups. The team reviews the video to see if they can find any other suspects. Barba and Olivia meet with Martha to help her get ready for the trial. She is rude to them both and says she will be fine.

The trial begins with Martha on the stand. She is very harsh and unsympathetic. Jed’s lawyer asks her about a quote in her book in which she says 99% of rape victims are lying about being attacked to get attention. Martha clarifies that she was referring to acquaintance rape. Jed’s lawyer points out that Martha stayed at a five-star hotel paid for by the Patriots for the American Way. The trial takes a break for the day and Barba meets Jed’s lawyer at a bar. They have a drink and he tells Barba he truly does not believe Jed raped Martha. During Jed’s testimony, he tells the jury that Randy, the founder of the Patriot group grabbed his sign out of his hand halfway through the rally.

During cross-examination Barba is able to get Jed to show his uncontrolled anger toward Martha. Randy is the last witness called to the stand. During cross-examination, he admits he hit on Martha the night before the rally and she insulted him in front of a room full of people. A recess is called and Olivia goes to ask Martha why she never told them about the encounter with Randy. She admits she can’t be sure who raped her. Barba questions Randy but halfway through asks the judge to drop the charges. He can’t in good conscience go forward. Olivia can’t believe Barba dismissed the charges. She thinks Martha deserved her day in court. She goes to Martha, who chose to meet in the bar where Jed works. Olivia apologizes to Martha but Martha continues to be rude.