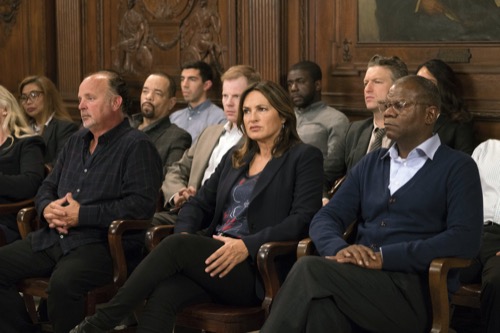 Tonight on NBC Law & Order SVU returns with an all-new Thursday, October 04, 2018, episode and we have your Law & Order SVU recap below.  On tonight’s Law & Order SVU season 20 episode 3 called “Zero Tolerance,” as per the NBC synopsis, “Benson and Stone strive to reunite a young girl rescued from a sex trafficker with her mother. Meanwhile, Rollins decides to give her rocky relationship another chance.”

An unknown man dumped the body of a sick child outside of a hospital on tonight’s all new episode of “Law & Order: SVU”.

The child was a teenage girl. She was groggy and naked when the hospital found her, but she later woke up and refused to say what happened to her. The doctors had run some tests and they saw enough evidence to believe that someone had abused her only she refused to say one way or another. She did at least tell the cops her name. She said her name was Delilah. She had been with her Uncle Luke and that he wasn’t a real uncle. He was more like a family friend and Delilah said that he took care of her. She said that she had spent time with one of her uncle’s friends and that usually they don’t hurt her. Delilah seems to believe that her “uncle” was taking care of her when he wouldn’t allow any of his friends to hurt her.

Unfortunately, the police knew better. They knew that Delilah was being brainwashed to believe this Luke cares about when he was actually pimping her out and couldn’t care less what happened to her unless it resulted in something expensive like having to replace her. Delilah hadn’t even known what the john’s name was. She just remembered feeling fine until she wasn’t and so the cops relied on the surveillance cameras. They found out their perp had taken a taxi to the hospital when he dumped Delilah and that the driver remembered the guy clearly. He knew he was white and middle-aged. He also remembered where he had picked up the guy and so the police were able to track him down.

His real name was Vince. He was a married businessman with two sons and had come to New York to specifically sleep with an underage teenage girl. Vince had heard about Luke’s services and he was able to provide the detectives with everything they needed to know to trap Luke. Luke was approached by another “businessman” and he led Finn right back to his den. The girls there had all seemingly been staying out of their own free will and so there had just been one girl that looked like she was terrified. Luke had said that little girl was special and that he couldn’t sell her just yet. The man had been finishing up his sales pitch about Finn could do whatever he liked within reason to the girls when Finn identified himself as NYPD.

Finn and the others were able to quickly subdue Luke and without him around – they went about identifying the girls. There had been some that ran away from abusive homes and others that had been living on the streets though the truth was Luke had a talent of picking out the most vulnerable girls around and so only the one was different. Luke called her his little Gabriella and he said he found her wandering around at Port Authority. The police had talked to Gabriella after that and it had taken them some time to get her to open up before she was finally willing to talk. Gabriella said that her full name was Gabriella Sosa and that she had been trying to get home to her mom. The police hadn’t known what she was talking about and so they ran her name through the database.

Gabriella had been reported missing by her foster parents. The detectives went out to New Jersey and met the foster parents for themselves. So they soon realized that the Wellbecks were good people. They had agreed to become foster parents when they saw on the news how immigrant children were being forcibly separated from their parents at the border and so they had tried to make their house a home for Gabriella. Only the little girl missed her mom. She refused to eat for a while and then when she did engage she worked up the courage to ask her foster brother how to get to Texas. He told her that she needed to catch a flight from New York because he hadn’t thought she would attempt any such thing.

Nevertheless, Gabriella was found by a predator as she was trying to make it to Texas. The little girl thought if she could just get there that she would easily be reunited with her mother and so the detectives at SVU had to be the ones to break the news. They found her mother at a detention facility and the woman was given a few minutes to speak to her daughter. She told Gabriella how much she loved her and that she misses her, but then she had to go and so the detectives had no idea what to do with Gabriella. She couldn’t go back to her foster parents because she would just runaway again and so the police had her staying at the station while they contacted someone from the government. It took them a few days but someone did arrive to collect Gabriella and sadly it was someone she remembered well.

The agent sent to collect Gabriella was the same person that had separated her from her mother and who had brought her to New York. Agent Phelps said he was just doing his job and, well, Benson explained how she was doing hers when she arrested him for kidnapping. He did technically take a child away from her mother and brought her across state lines. Both of which are crimes and so Benson had tried to make a point with his arrest. She wanted the world to see how someone was standing up against this “no tolerance” policy and she got lucky because Stone was willing to back her. He went to court to try and uphold the arrest of Agent Phelps though nothing he could’ve said would have changed the judge’s mind. The judge said the federal agent was merely following orders and so she had Phelps released.

Phelps then went on to collect Gabriella and so the police had to let the little girl go. They hadn’t liked it and Stone for one had pulled together a massive favor. The favor was to grant Gabriella’s mother asylum and so Gabriella was eventually returned to her mother however Benson had been the one to get her and she had seen the detention facility for herself. And it had killed her walking away from hundreds as they all waited to see if their parents arrive….

Rollins hadn’t been sure about her pregnancy until this case. She didn’t know if she had it in her to raise another child by herself and so meeting Gabriella had helped her make a decision. Rollins was going to keep her baby and it didn’t matter what anyone else said!