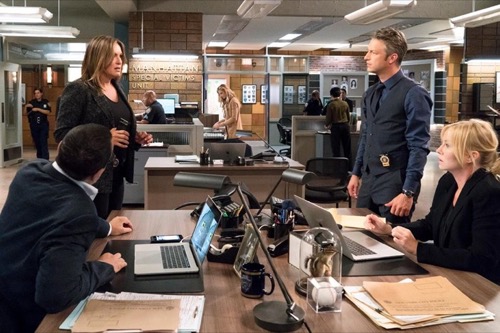 Tonight on NBC Law & Order SVU returns with an all-new Thursday, November 29, 2018, episode and we have your Law & Order SVU recap below. On tonight’s Law & Order SVU season 20 episode 10 called “Alta Kockers” as per the NBC synopsis, “The investigation into a promising new author’s death leads to a decades-old secret kept between two reclusive brothers.”

A young woman was beaten to death outside of an event on tonight’s all-new episode of “Law & Order: SVU”.

The victim was Bobbi O’Rourke. The detectives called to the scene thought that their victim was a transgender woman and it turns out the truth was a little more complicated. Bobbie ran away from home at a thirteen and became a child prostitute to make a living. He dressed as a girl back then to make more money on the street and wore the dress again because of the event. Bobbi had written a book and had worn a dress because he wanted to take his readers back to the time where he did what he could to survive. He was in the dress when he was killed and so the detectives thought that could still be a hate crime, but investigating the situation became a problem because of the victim. He was a reclusive author and not even his publicist knew where he lived.

The detectives knew Bobbi wasn’t on the street anymore because he made over a half million thanks to his book and so they had had to work backward from the bank account to find out anything they could about their victim. Bobbi it seems had wanted a life out of the limelight because of his old profession and he put barriers as well as keeping secrets however the police were able to use the book event. They had found video from it and they tracked down their killer in a short amount of time. He was seen following Bobbi out of the event and when they brought him in he didn’t bother denying the crime. The killer said he had to do it because he wasn’t gay and Bobbi had lied to him.

The killer was William Glover. He used to pay Bobbi money to sleep with him and the killer never knew that the Bobbi was a young man. He also claimed to have seen Bobbi out working the streets up to a few weeks ago and he said that what Bobbi was doing by lying to people made him sick though the fact that he was still seeing Bobbi out on the street was odd to the detectives. They had talked to a publisher who claimed that he would go looking for Bobbi to make sure he wasn’t still turning tricks and so Carisi spoke again to the publisher because he wanted to know if the man lied or if he allowed an illegal act to continue under his nose. And the truth was that the publisher was lying about quite a few things.

The victim wasn’t actually Bobbi O’Rourke. He was just someone that the publisher paid to do the event because the real Bobbi didn’t want to be seen in public. So the detectives didn’t know who they had in the morgue and the real Bobbi could be in danger. They went back to the bank account and they traced it to an expensive man. The owners of this mansion were two elderly brothers who claimed the only Bobbi O’Rourke they knew died over fifty years ago. The brothers still needed to answer some questions and so they were taken down to the station. They were asked about the writer and gave up a lot of fuss just to say they had never heard of him. The writer could be anyone and they wouldn’t know it.

Ben and Joe Edelman were hoarders. Their home, which they inherited from their parents, was filled with junk and the last person they had in to clean the place was fired more than forty years ago because she was suspected of stealing a quarter. The brothers themselves liked to argue over things that happened back then and so it was hard even to keep on topic. They were asked about Bobbi again and they said that the guy they knew died of diabetes yet the detectives did get an honest answer when they threatened to put the brothers in jail. That was when Ben admitted that he was Bobbi. He said that’s why he could never show his face. Ben said that borrowed his friend’s name as the hero for his book and that he had to write it.

The money that the brother inherited would have run out in six months and so Ben thought he needed to do something drastic. He wrote the book and said that was his only crime, but the detectives found the body of his mother in the freezer. She had tumors in both of her lungs and must have been in a lot of pain towards the end. It was why her sons most of suffocated her. The woman had been asphyxiated by what the coroner suspected was a pillow and so both of the brothers were still arrested. They were arrested for murdering their mother and while the detectives could have left it at that – they still had questions because the book seemed like Ben had been abused.

Benson went to go see Ben in prison and she told him she read the book. She wanted to know what inspired it and he tried to clam up. He didn’t think it was important and it was. Benson said that it still matters and so Ben explained to her what happened. How there had been a place to go to play games as a kid and how the counselor’s name was Vincent. Vincent was in his twenties and he molested Ben who never told anyone because he thought no one would love him if they knew however it was later revealed that Rollins had gone to talk to Ben’s brother Joe and Joe had also been molested by Vincent. He hadn’t told anyone because he thought they would blame him and so he instead tried to protect Ben. And by denying Ben the truth, Ben also fell victim to the same man.

Both brothers were traumatized. Its why they never moved out of the house and hadn’t left since 1973 when the book brought all of their secrets to the surface. Benson felt for the brothers and she went to ADA Stone because she wanted him to cut a plea deal with them though he had already tried it and they said “no”. The brother both claimed that they hadn’t killed their mother and they went to trial. And somewhere along the way, Joe had felt so bad that he confessed during the trial to the murder of their mother.

Joe was in such frail condition that he suffered a heart attack and was rushed to the hospital where his brother Ben broke down.

Joe had confessed to the crime because he knew that his brother killed their mother and the truth ended up dying with him.

The charges were dropped against Ben.

And Ben eventually confessed to his brother’s body what happened all those years with Vincent because he regretted never telling his big brother.