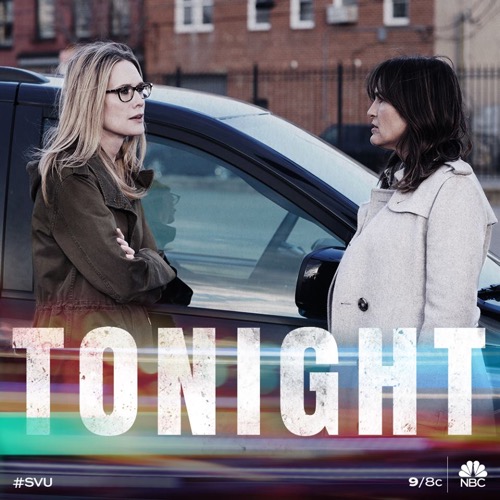 Tonight on NBC Law & Order SVU returns with an all-new Wednesday, March 18, 2018, episode and we have your Law & Order SVU recap below.  On tonight’s Law & Order SVU season 19 episode 19 as per the NBC synopsis, “The search for an abducted woman and her young daughter leads Lt. Benson to cross paths with an old friend. Meanwhile, Stone must make a tough decision on behalf of his sister.”

The squad was alerted to a kidnapping situation after a husband received a very disturbing call from his wife on tonight’s all new episode of “Law & Order: SVU”.

The husband was Nick Hunter. Nick had been having some sorta house party and his wife Jules had been running late because she had picked up their daughter Ruby from aftercare, so no one suspected anything could have happened. They had all just assumed she was running late when Nick finally got a call and decided to put his wife on speaker while he teased her for running late however she wasn’t running late because there had been someone else in the car. Some stranger that threatened her to keep quiet and then he had started to issue orders to the husband. Like if he didn’t get what he wanted that both the man’s wife and daughter would be killed.

But the husband had chosen to call the police. The police needed to be informed because Nick hadn’t been the only one that was alerted to there being something wrong and so he had told the police everything he allegedly heard on the phone. He told them he heard his wife scared and that this guy had then take control of the conversation. Nick claimed he heard someone threatening to kill his family and that he couldn’t remember much else yet the detectives had seen how beaten up he couldn’t remember much else and so they decided to trace the call. They followed the signal to an outlet mall and found Jules’s car.

The car had had blood all over it and there had been signs on the tires that showed she may have pulled over to fix it though the forensics team out there had also found Jules wallet as well as her cellphone. If it had been a mere mugging then the guys would have taken the phone and the credit cards and so the fact that everything was still at the scene had had the detectives believing that mother and child had been taken for another reason. They went back to Nick to ask if there had been anyone that threatened him or would want to hurt his family and Nick’s mother had decided to ignore her son when she told Benson that a man named Jorge was a threat.

Nick didn’t believe Jorge was a threat and so Benson had to prod him for answers. She wanted to know why Jorge would have a grudge and that’s when Nick told her the story. He said that Jorge was a contractor who did some work for him and that he thought it was shoddy, so he fired Jorge ad the next day someone broke into the house. Nick said nothing was taken and he thought it could have been anyone that broken in while his mother thought for sure it was Jorge. Jorge had even been seen in an argument with Jules the day before she died. So the detectives went to talk to Jorge and Jorge told them that he didn’t have a problem with Jules.

Jorge said Jules was a sweetheart and that she had come to him to pay off the rest of the money her husband owed him, but Jorge said that things did get heated when he told Jules that her husband was cheating on her. Jorge claimed to have seen Nick laughing it up with a much younger woman with purple hair and the detectives followed that lead into finding Nick’s mistress. The mistress was Paisley and she thought Nick was sweet because he was still in love with his wife that got into a tragic accident with their daughter. In other words, Paisley had no idea that Nick’s wife was fine until a few days ago and so that then made Nick look suspicious.

It also wasn’t the only thing that made the detectives become concerned about Nick. Nick had been a big deal in high school as well as college and he had a mother that put him on a pedestal, meaning he didn’t react well if things didn’t go his well. His in-laws had never gotten proof from Jules to form an opinion and still her sister believed Jules had been abused. She said that they had all gone out one day and that everything was going fine until Jules had made a joke at Nick’s expense. He had pretended to take it well before he would go one to say that his life would be easier if his wife was dead. It had been a joke only he found to be funny and his sister-in-law had never forgotten it because for all she knew he could have gone through with it.

The detectives at this point didn’t believe that either Jules or Ruby were alive. They found out that Jules had never gone to work the day she went missing or dropped her daughter off and that it also meant the detective’s timeline was completely off. They thought Jules went missing that night when she could have gone missing the night before and so they looked at the cameras outside the mall again. They looked and they found a former servicemen had been driving Jules’s car, he also picked up vegan kids meals and so Amanda didn’t believe either Jules or Ruby were dead. She said she learned that Ruby had a sensitive stomach and that all she could eat was Vegan meals. And so they staked out the man they saw in the security feed.

He picked up a mother with her kids and he dropped them off in Alex Cabot’s care. It was seeing that trade-off as well as Alex that made Benson put it all together. She realized her old friend was running an underground railroad for abused mother and kids, only Alex was going even further because she had used her expertise to stage a scene that made it appear like a murder had happened. Benson had confronted her friend right then because Alex was committing a crime. She was harboring Jules and Ruby knowing that Nick was arrested for their murder and so she was making herself out to be an accessory that, but Alex said it had been the cops that came to that theory and that she couldn’t be held accountable for that.

The worst Alex could be arrested for was accessory to custodial kidnapping and so she hadn’t wanted to tell Benson where the Hunters were yet Benson had demanded it. She needed enough to get Nick out of prison and arrested for spousal abuse. So Alex brought Benson to Jules and Jules told her about her husband. Like how he was knock her around because he had thought she was flirting with the waiter or how he threw his hot coffee on her because she had gotten up before him to make him his breakfast. Jules told Benson everything and Benson had to lower the charges, only Nick decided to sue. He said he was owed because he had been arrested on false charges and then assaulted at Riker’s.

It was as he was suing that city that Benson was forced to admit Jules was alive and so they had Jules file for immediate custody as well as press charges against her husband, that had upset Nick and he had been angry though it had later been going in Jules’s favor. It had looked like she was going to get her divorce and her daughter right up until it all went wrong. She had been in protective custody and still someone had gotten close enough to assassinate her. The squad and even Alex knew that it had been Nick and unfortunately they hadn’t been able to prove any of it. He had walked and he had gotten custody of his daughter. And the worst part was that they all knew that Alex’s way doing things would have kept Jules alive and her daughter safe.