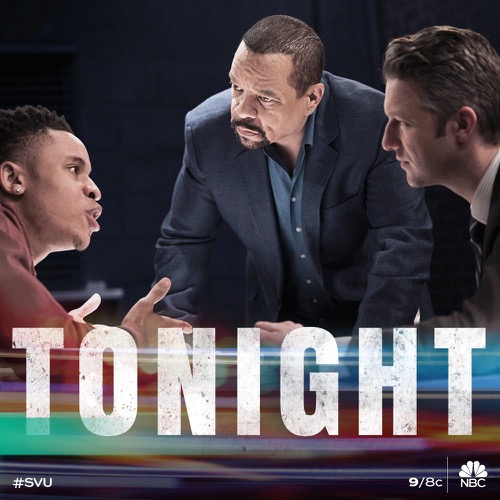 There was a little bit of a misunderstanding at a bodega when someone came in demanding to use the phone on tonight’s all-new episode of “Law & Order: SVU”.

The “misunderstanding” occurred when Malik tried to show the store owner that his phone was dead. He had wanted to show the other man that he had to use the phone because it was an emergency and unfortunately the store owner thought he had been reaching for a gun. He chased off Malik and his friend before calling “911” and then pointed out to the two men when the cops showed, but Malik explained he hadn’t tried to rob the store and instead all he wanted to do was make a phone call because someone raped his sister. His sister Tiana had been at the playground when a group of guys came and pushed her onto the floor. The cops that Malik talked to had called the situation in and they had later found Tiana still there.

Tiana was a sixteen-year-old and had been pretty out of it when they found her. She had just kept apologizing and so they put a rush on the bus. They got her to the hospital and she had been so shaken that the doctor convinced SVU not to call social services. Tiana had had alcohol and heroin in her system through the doctor knew they couldn’t alert social services because all Tiana had was Malik. Their mother was in prison and their father was never in pictures. So SVU had agreed with the doctor’s assessment. The only thing they had wanted to do was talk to Tiana and she hadn’t been much help. She said that there had been three of them and that they held her down. And right off that didn’t like Malik’s story because he said that there had been six guys and that they had a gun.

Malik claimed that he left when he saw the gun because he hadn’t wanted to die. He later met up with his friend Jerome on the way to the bodega and even Jerome had had a different version of the story. He said when they met up that Jerome just said his sister was in a bad way and later on that the guys that raped Tiana had been in a gang, however, the cops didn’t understand why Malik was afraid to identify these men and so they thought maybe he was scared. They decided not to lean on Malik because of what his family went through and had come at their investigation another way. They realized that Tiana’s bag was missing from the scene and so they went looking for her EBT Card.

The card was flagged at a liquor’s store and security cameras helped them to at least get a picture. The pictures of Ray Wallis otherwise known as “Four Stroke”. He had a history and was in fact on probation for rape, so they brought in Wallis and they questioned about the card. He said he took it off of three kids that had bragged about having sex with a girl and so the detectives found those three kids. It turns out they really were kids! They were Darryl, Leonard, Deshawn Haynes and they lived with their grandmother who promptly got them a lawyer when she found out what her grandsons were getting arrested for. Except for the lawyer she hired was Ron Wright. Wright was the bane of many ADAs because he wasn’t afraid to play dirty.

Only this time Wright had a point to make. He told the detectives that they had been wrong about his clients because they hadn’t raped Tiana. Tiana was a prostitute and the boys said that they hacked one of their mother’s rings to pay her pimp two hundred dollars. They also said the pimp’s name was Malik. Malik had been pimping his underage sister out and when they went to arrest him they found his sister out of it. She had been on heroin again. Malik kept his sister in drugs to ensure that she pliable whenever he pimped her out and so he made up the rape to cover up his crimes. He had wanted to use the phone because she probably needed another fix and then later he had been the first person to reach his sister. His sister merely repeated what her brother had had the chance to tell her and that’s why their stories never matched up.

The police arrested Malik and they called social services, but Tiana had later changed her story. She said it had been her idea to prostitute herself and that her brother hadn’t known anything about it. Tiana had hoped that if she changed her story that they would let her brother go and the police couldn’t do that. They had Malik for child abuse and so they made a case even when Tiana refused to tell them what really happened. She had gotten her brother a lawyer and the lawyer just so happened to be Wright’s daughter. The daughter was just as fierce as her father and had tried to claim the police were railroading another black young man. And the police had evidence on their side.

They had found Tiana’s driver and got him to testify in exchange for dropping charges against him. Bobby had kept records and had told the court about the many times Malik pimped out his drugged-up sister however the real clincher for the case had been the siblings’ mother. Ms. Williams was in jail because she slashed her own client when he wouldn’t pay the agreed to amount and so Stone got her to go on record to say that she was also a prostitute and her son Malik had been her pimp as well. Malik it seems had never worked a day in his life because he had always had his family he could use. And so when Tiana heard that, she had needed to get another high and had gone to Malik’s friend Jerome.

But something went wrong and she was taken to the hospital for an overdose because Jerome had given her a hotshot.

It was until Tiana gave up his name that he informed the police that it was Malik that wanted his sister down. Malik was afraid now that his sister knew the truth about him that she would testify and so they also got Malik on attempted murder. He could still have fought the charges though he decided not to when Tiana said she would tell the court about him if he didn’t just take a deal. The ADA had wanted to spare Tiana and Malik’s lawyer knew that Tiana could get him put away for life, to the two took the deal and afterward Malik tried to claim he loved his sister. This time, however, she hadn’t told him she loved him back.