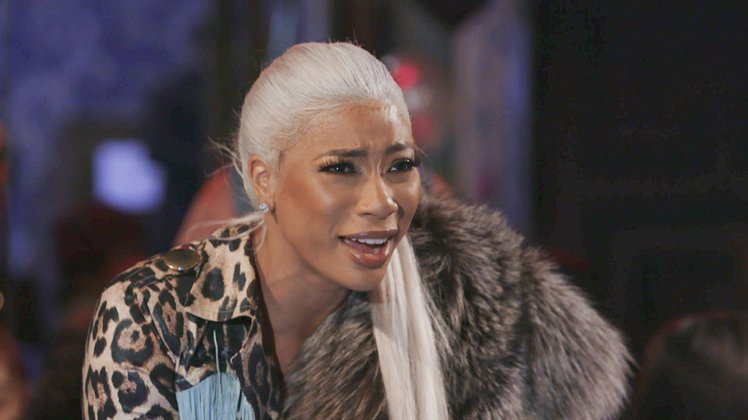 Tonight on VH1’s hit series Love & Hip Hop Atlanta returns with an all-new Monday, March 26, 2018, episode and we have your Love & Hip Hop Atlanta recap below for you.  On tonight’s season 7 episode 2, “Oh Baby,” as per the VH1 synopsis, “Erica Mena is blown away when she meets Tommie, but will they end up feeling each other or killing each other?”

This week on Love and Hip Hop Atlanta Jasmine has shown up at Pressed and informs the family that Kirk has taken the DNA test and that Kirk is the father. Shirleen tells her “Rasheeda is gone for the day.” Jasmine tells them “I just want to sit down and speak to her.” Kelsey pipes up and says “What did you hope to accomplish by talking to Rasheeda?” Jasmine says “I just want to right my wrongs so if you could pass along the message.” Shirleen says “Maybe we can and maybe we can’t.”

Ericka meets up with her friend Alfie to discuss her situation with Stevie. She tells him “I just want to work on this music. Maybe I should work with him for one song.” Alfie says “Maybe we should have a party.” Ericka is excited. She tells him “Yes. That way everyone will know that I’m in the club.” Alfie says “Can I bring a date?” Ericka wants to know who. Alfie says “I’ll bring Escalita.”

Escalita goes to talk to Mimi about the situation with Mimi. She tells Mimi “He invited Ericka Menna to the studio and told her that he wanted to make her the face of Danger Zone right in front of me.” Mimi is disgusted as she listens to Escalita. Escalita goes on to tell Mimi “Stevie had the nerve to tell Ericka that I slept with him. I wasn’t going to admit it in front of Ericka but we did mess around.” Escalita then tells Mimi “Stevie has taken advantage of my dreams but I won’t let him steal my dreams.” Mimi tells her “He can’t keep doing this to women.”

Sierra is trying to move on from her marriage to Shooter. She is now dating BK and having a wonderful time.

Shirleen shows up at Rasheeda’s house to tell her about Jasmine showing up at Pressed. Rasheeda asks Shirleen “What did she want?” Shirleen tells her “She wants to sit down and have a conversation and have the baby be part of the family.” Rasheeda is pissed when she hears this. She tells her mother “Hell no! I don’t have anything to say to that girl. She knew he was married when she laid down with him.” After she calms down she tells Shirleen “I told Kirk he needed to handle his business and tell his kids about this, but now I am wondering if I need to be there.”

Ericka’s party is a hit. There is a serious flirtation going on between Tommie and Ericka, but Tommie is a bit worried about a repeat of the whole Joseline situation. Ericka asks her “Can I take you out sometime? I know you may have to think about it and I’m cool with that.” Tommie decides to dip out having had enough.

After Tommie leaves Ericka is quite surprised to see Mimi moving through the party with Escalita as her surprise guest. The two women reach Ericka and Melissa and all four greet each other. Alfie steals Escalita away leaving Mimi and Melissa alone.  Melissa says “I want to figure out a way for us to be cool and be homies again.” Mimi tells her “We’re cool. It’s all good.”

On the other side of the room, Ericka and Escalita are talking. Ericka tells her “I don’t want you to go through what I’ve been through and to be taken advantage of. You’re so talented and I don’t want you to get caught up in the same stuff I did. That’s why I showed up at your studio session was to see what you’d gotten yourself into.” The two women hug and Ericka tells her “We have to get you out of your contract. You made your bed now we have to make Stevie lie in it!”

Jasmine is upset that Kirk is not there for Kannon. She is talking to her mom. Her mom asks “Is Rasheeda making it difficult for Kirk to be part of Kannon’s life?” Jasmine says “No. I went up to the store to try and talk to her but she doesn’t want to talk to me.” Jasmine’s mom says “She sounds like she’s mad at you and she should be mad at her husband. It sounds like everyone is blaming you.” Jasmine says “I just want Kannon to know who his brothers and sisters are.”

Rasheeda calls a family meeting. When Kirk walks in Rasheeda and all of his children are there.  His daughter tells him “Your baby’s mother walked into the store and told us that you had taken the DNA test and that the baby was yours. Is it true?”  Kirk tells everyone “It’s true, but I don’t deal with her. We go through the lawyers.” His daughter asks “Have you seen the baby?” Kirk says “No. She has her people and I have mine. Kirk’s son asks Rasheeda “How do you feel about all of this?” Rasheeda says “I just want her to stay away from my store and out of my business.”

Ericka is busy working on her music and a photo shoot when Tommie comes to return a bracelet from the party. Ericka tells Tommie about the situation with Escalita and Stevie J, Tommie tells Ericka “I wanted to work with Stevie at one time, but things went sideways,” Ericka invites Tommie to the training seminar that Jazzy has set up for her.

Karlie meets up with Sierra and Tokyo Kim and Sierra. Sierra reveals her relationship with  BK and Karlie tells her “I’m dating his best friend!” All of the girls are excited and happy that Sierra is moving on. Sierra says “That mess with Shooter and Mariah really hurt me.” Shan asks her “Is that all he’s done?” Everyone stops in shock. Sierra wants to know what SHAN  is talking about. Karlie says “That’s all I know that he’s ever done.”  Kim says “Shooter has a two-year old that gets her hair done at the shop.” All of the ladies are stunned. Sierra tells her “Shooter doesn’t have a two-year-old baby.” Shan says “He has a two-year-old and another one on the way.” The ladies are pissed and everyone is in an uproar