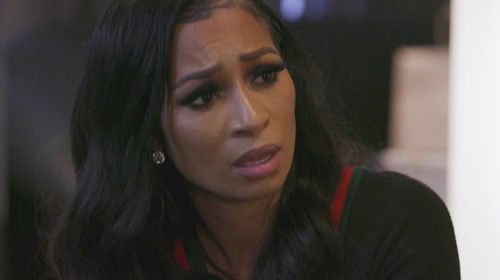 Tonight on VH1’s hit series Love & Hip Hop Atlanta returns with an all-new Monday, April 9, 2018, episode and we have your Love & Hip Hop Atlanta recap below for you.  On tonight’s season 7 episode 4, “Do It for Finesse,” as per the VH1 synopsis, “Kirk and Jasmine come face to face for the first time in a year. Samantha pushes Tommie to make up with her sister Versace. Karlie finds herself in a new role as caretaker for her sick father.”

This week on Love and Hip Hop Atlanta Shooter are having a hard time dealing with the death of his son. He gathers his friends together to help him mourn. He tells them “Thank you all for being here for me.” Shooter tells them how his son was killed in a petty dispute. Big Meek comes up and tells Shooter “There is no one to guide them and teach them in the right way. All they know is what they see in the rap songs.” Shooter says “You can only kill hate with love. With that being said ya’ll know me and my wife are almost divorced. I expected her to be here way more than she was

Tommie meets up with her mon and the two ladies try to talk about the situation with her sister Versace. Tommie says “I’m not gonna deal with anyone who is gonna have assault charges pressed on me,” Samantha says “I want the two of you to sit down and can I at least have you soften up to be able to accept an apology?” Tommie is not hearing it. Samantha continues to cajole her. Finally Tommie agrees to accept Versace’s apology, but Samantha is not done there. She tells Tommie “The next thing is for all of us to do a family portrait. Everyone else is on board. All we need is you.” Tommie says “Ya’ll can just crop me in.” Samantha says “No, we need you there.” Tommie reluctantly agrees to be in the portrait.

Kirk is having to deal with his own family issues. Namely the fallout from his affair with Jasmine. Now he has to meet with Jasmine. They meet at his lawyer’s office. She tells him “It’s been a little minute, Why haven’t you seen Kannon?” Kirk says “I’m not going to be dealing with outside dudes and all that messiness.” Jasmine says “I want to get to a place where Kannon can meet his siblings.” Kirk says “You have to keep in mind that there are certain things that you can’t do like popping up at Press.” Jasmine says “I just felt like I owed her an apology.” Kirk says “There is still a lot of repairing that I have to do inside my family.” Jasmine shows Kirk some new videos of Kannon and he is happy to see his son.

Karlie is meeting up with her new man. They are talking about their family situations. She tells him “My dad had a heart attack and then I get a phone call telling me that he had Cancer. Why do I have to be his caretaker when he didn’t do anything for me?” Sean tells her “Look at this as God giving you an opportunity to build a relationship with your dad.” Karlie feels a lot more at peace about moving her dad from Florida to Atlanta.

The guys are getting Shooter involved in a community service project. While the guys are working Shooter’s old friend Kiva shows up. She asks “What’s up with Sierra?” Shooter says “I have been calling and texting her and she hasn’t been answering. The divorce is almost final.” Kiva says “If you feel like she’s out there doing her why aren’t you out there doing you?” Shooter looks thoughtful about this. Kiva says “I brought someone who might be a distraction.”

Kirk meets up with Rasheeda at Mourning Dove for a chat. He tells her “I met up with Jasmine. We talked about boundaries and I told her not to show up at Press.” Rasheeda tells him “I want her to stay over there in her little place. As for you and Kannon you are an amazing father and I want you to be an amazing father to him.” Kirk moves on to talk to Rasheeda about a possible business deal. He tells her “I got a deal for you to do a workout video.” Rasheeda asks “How far into the negotiations are you?” Kirk says “They’re done.” Rasheeda is not happy to hear this. She tells him “We need to respect the boundaries, especially because we are going through something. Let me see what’s in writing and I’ll consider the deal.” Kirk presses his luck a little further and says “What about me moving back under that big old roof so that we can have these discussions?” Rasheeda tells him “Now you are really pushing the boundaries.”

Samantha has decided to try and trick Tommie into being in the photo shoot. She doesn’t tell her that her meeting with Versace at the shoot itself which has a 70’s theme. Everyone is having a great time taking pictures until Tommie walks in and realizes what is going on. To say she is NOT HAPPY is an understatement! Tommie looks blindsided and completely ambushed. She tells them “It’s some things that haven’t been discussed and I feel ambushed. I’m out.” Everyone tries to convince Tommie to stay. Finally Versace steps up. She tells Tommie “I love you like a sister and I want us to be a family. I apologize, but I think you should apologize too.” Tommie completely flips the script and the fight is on! Tommie is not hearing of Versace’s foolishness and as the two women come to blows they have to be separated by security. Tommie decides to completely cut ties with her family.

A new artist named Just Brittany is performing at the club. Joc is babysitting for Shooter’s friend. Keely is being messy and trying to hook Shooter up with her friend. Meanwhile, she is having her own issues with her boyfriend. When he comes over to the table goes in on him. She tells him “You better figure out what home you going to because you ain’t coming to mine!” Then she throws her drink and exits the table.

Karlie has brought her dad to Atlanta for a visit. Karlie’s sister Katrina comes over with her son.. After they greet the little boy they get down to business. Karlie tells him “No one lives in Florida with you. I’m worried about you.” Their dad leaves the room and Karlie asks her sister “Why did dad make me power of attorney?” Katrina says “Because you’re the youngest and I have a lot on my plate.” Karlie says “Well what if I change my number? Then who will they call?”

Just Brittany heads to the nail shop to get some advice from her mentor Kelly. Brittany tells her about the incident between her, Escalita, and Ericka. She tells Kelly “I have never had to sleep with a man to get his time. If I want him to have my time I will give it to him.” Kelly tells her “I will talk to Stevie and see if I can help you because I don’t wanna see you get caught up.” Brittany is relieved. She tells Kelly “Stevie invited me to this mixer, but I declined.” Kelly tells her “If you want to go I’ll go with you.” Brittany is relieved.

Despite her reluctance agrees to meet up with her mother and sister yet again.