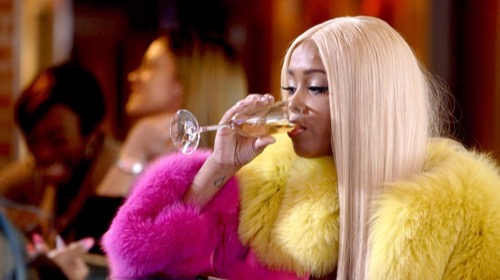 Tonight on VH1’s hit series Love & Hip Hop returns with an all-new Monday, February 19, 2018, episode and we have your Love & Hip Hop recap below for you.  On tonight’s season 8 episode 15, “Remix,” as per the VH1 synopsis, “Bri and Mariah try to get Dream and Bianca on the same page. Jaquae tries to fix his relationship with Kiyanne, but she’s got tricks up her own sleeve. Safaree continues to bond with Juju and brings everyone together to record “Paradise,” the remix.”

This week on Love and Hip Hop New York the creep squad meet up for some tacos and a catchup session. Safaree tells them  “I really appreciate Yandy for all that she did and organizing the trip, but the remix is mine and I feel like I need to let her know that she is not an executive producer or anything like that.”

Jonathon meets up with Anais to try to settle their issues from St. Martin.. He tells her “Yandy could’ve invited anyone on this trip. I extended the invitation to you. If Yandy wanted to use to count the beads you should’ve just counted the beads.” Anais is not hearing it. She tells Jonathon “At Yandy’s last supper you should’ve had my back, but you are a bad friend.” Jonathon calms her down. He tells her “I am not a bad friend and Yandy is not bougie. You should’ve just done what Yandy asked you to do.” Anais laughs. She says “We are in a marriage. We fight, We make up.” They both laugh and hug.

Brie feels great now that she has put the issues with Mariah to the side. She meets up with Dream and tells her about the trip. Brie tells her “There was some drama, but it was mostly cool. Mariah and I decided to squash our beef.” Dream is not happy to hear that. She tells Brie “I had your back in all of that mess and this is not cool.” Brie says “I’m just trying to keep things moving and make my grandmother proud.”

Safaree invites JuJu out and talks to her about his feelings about Yandy being involved in his remix project. JuJu tells him “I get where you’re coming from.” Safaree asks her “What should Ii say?” JuJu tells him “Just let her know that you appreciate her help, but that you want to do this n your own.”

Dream goes to talk to her mother about the situation with Brie. She tells her “I had Brie’s back when she and Bianca were beefing and that pitted me and Mariah against each other. Now that Brie and Mariah have made up I feel some type of way.” Dream’s mother tells her “You have to rise above the pettiness and keep moving forward.” Dream says “I know. Mariah and I tried to have a conversation, but she said something to me and I said your mother and it popped off from there.” Dream’s mom tells her “You know better than that. I raised you better than that.”..

Kyanne is still really upset about Jacquee being in the room with Anais. She finally decides to meet with him. He tells her “I’m very sorry for the mess with Anais.” Kyanne asks him “How did all of that even happen?” He tells her “I felt like we were really disconnected. I went back to the room, smoked some hookah and fell asleep. I promise that I will never let that happen again.” Kyanne is still a bit skeptical. She tells Jacquee “This is a contract that you will agree to orally if you want to keep me around.” Jacquee looks a bit nervous as Kyanne makes him repeat after her. He tells her that he agrees to never lie or keep secrets from her ever again.

Mariah goes to Bianca’s club performance. After Bianca is done performing the two ladies sit down to chat, Mariah tells Bianca about the truce that she reached with Brie in St, Martin. Bianca, like Dream, is not happy to hear it. She tells Mariah “That’s disloyal.” Mariah tells her “You and I are up here and just because I decided not to beef with Brie anymore doesn’t mean that we are best friends.” Bianca is still not hearing it and tells Mariah no. Mariah tells her “Safaree is working on a remix for his track Paradise and Brie was there. I would love to get you on.” Bianca is reluctant to discuss the possibility.

Brie is on a peacemaking mission. She gets Mariah and Dream together to try and hash out their differences,  Mariah tells Dream “I don’t ever want to step on anyone’s dream.” Dream tells her “My music is how I feed my family and so anything that is said I take personally.” The two ladies make peace and hug it out.

Kyanne decides it’s not enough to take Jacquee at his word that he is honoring the verbal contract and decides to pop up at his video shoot. In addition to her surprise visit, she has brought along an unexpected guest in Anais. Jacquee is happy to see her. Anais, however, is another story, Kyanne is determined to get to the truth about St. Martin. She asks them both “What happened that night?” Both Jacqueee and Anais tell Kyanne that nothing happened. Kyanne asks Anais “Who was there when you exposed yourself?” Anais is appalled. She and Kyanne exchange heated words. Kyanne says “What kind of married lady exposes herself to my man?” Anais tells her “Don’t worry about my marriage. “

Mariah and Safaree are working in the studio. Mariah tells Safaree “The track is dope, but it needs some of that Brooklyn flavor. I think we should put my friend Brie on the track. I invited her down here to work with us.” Safaree is ok with it. Bianca walks in and drops a bombshell. She tells them “I just came down here to tell ya’ll  I’m not doing the record.” Safaree says “Don’t you want to help people on an island who have lost everything?” Bianca is not having it. She tells them “I wasn’t invited to the island. Everyone was sleeping on the island and making up on the island and I wasn’t there so no. Since Brie is on the track I want nothing to do with it.” She then says “I just came down here to show Mariah what it feels like to be backstabbed.”

Anais is hanging out with Jonathon.  He asks her about the situation with Jacquee. She tells him “It’s dealt with.” They then move on to talk about Rueben. Anais tells him “Rueben has moved out. I didn’t know how much I wanted my marriage until he left.” Jonathon comforts her. He tells her “I know you do. I know those tears come from a place of hurt.”

Bianca decides to go back to the place where the original beef began. She tells him “You pitted me and Brie against each other and you stole a song from me. Then you threw dirt on my name by telling people not to work with me.” He tells her “I told you both that you were better than the other.” Bianca says “Exactly! and we have been fighting each other ever since over some mess you created!” She tells him “I’m done with you.”