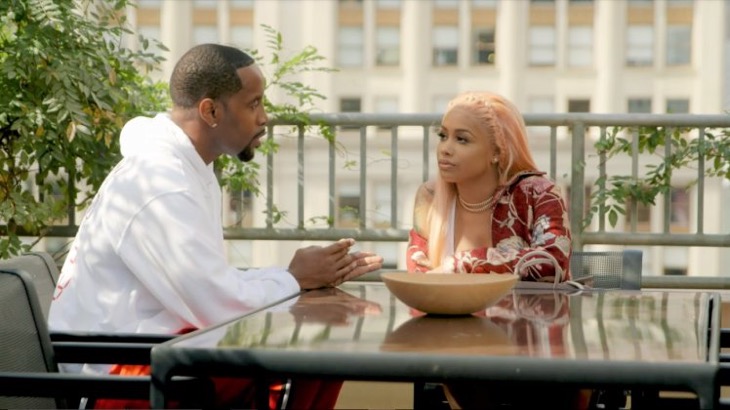 Tonight on VH1’s hit series Love & Hip Hop returns with an all-new Monday, January 1, 2018, episode and we have your Love & Hip Hop recap below for you.  On tonight’s season 8 episode 10, “Single No Mingle,” as per the VH1 synopsis, “When Safaree notices that Dreamdoll has posted another man for National Boyfriend Day, he decides to ask her if she sees a future for their relationship.”

This week on Love and Hip Hop New York Anais is meeting with Jonathon at her house to hang out and talk She asks him “Did you find out about Trent?” Jonathon tells her “Yes. But he decided to do his research on me and find out about my marriage. My husband lives in California and I live here. I don’t love my husband anymore!” While they are talking Rueben comes home and interrupts them. Anais tells him “Excuse yourself.” Rueben says “I haven’t seen Jonathon in a long time.” He tries to sit down and join the two of them, but Anais is not having it. She tells her husband “Excuse yourself!” Rueben is not happy but he leaves. Once he is out of earshot Anais tells Jonathon “I have met a new man who tickles my pickle. It’s Rich Dollarz.” Jonathon says “Just be careful because Rich is known for sleeping with his clients.”

Mo and Yandy meet up to hang out and talk while the kids have a playdate. Mo is still frustrated about her relationship with Karl. She tells Yandy “I’m trying really hard to keep things together for my kids because I saw how devastated my daughters were when I left their dad and my son was devastated when he found the cheating allegations online about his dad. It’s affecting my music.” Yandy tells her “You can’t allow your personal life to affect your coins.” Mo says “I’m in the studio working on some new stuff while Karl is focusing on himself and his boxing.”

Safaree meets up with the creep squad for a little guy time. He is having his own relationship issues it would seem. Self-asks him “How are things between you and Dream?” He says “When we first started going out things were great, but lately it has been slipping. I saw she posted some other guys picture on her Instagram for National Boyfriend Day so I need to sit down and have a talk with her about what’s going on.” The group is shocked to hear this. Snoop then invites them all to her new sneaker release party.

Anais and Rueben are having a confrontation. He asks her “Why are you never home when I come home? I always see the nanny? Did I marry the nanny?” Anais is frustrated. She asks him “What are you? My husband or my daddy?” Rueben asks her “Are you seeing somebody else?” She says “Maybe I am, maybe I’m not.” Rueben fires back and tells her “If you are seeing someone else I’m going to file for divorce from you.”

Moe is in the studio rehearsing when Karl pops up. She takes a break and asks him “What are you doing here?” He tells her “I just needed a few minutes with you.” Moe tells him “Did you not think that I didn’t respond to you because I was busy? I have to audition a leading man for my video and rehearsing and all this other stuff.” Karl says “I used to always be your leading man.” Moe says “You used to, but times have changed.” Karl Moe tells him “You can audition.” Karl laughs and says “I’ll get the role too,” Moe just laughs.

Mariah meets with Self to discuss the incident between her and Dream Doll. Self asks her “Why am I getting fifteen phone calls about you and Dream fighting in the park?” Mariah quickly tries to defend herself and tells Self that it was Dream’s fault. Self tells her “You started it.” Mariah becomes frustrated and tells him “I am clearly the better artist but you always want to defend her.” Self tells her “It’s not about defending her. You need to step back and figure out why you are always in the middle of some mess.”

The creep squad takes Navarro out to get him out of the house after finding out that Ashley is pregnant. Navarro asks Rich to step in and take over Anais’ meet and greet while he stays at home with Ashley. While the boys are hanging out Anais shows up and pulls Rich away to talk to him alone. She tells him “I had a fight with Rueben and he wants to ask me for a divorce.” Rich asks her if she wants a divorce. She tells him that she does. Then she says “I need to know if you are going to have my back because this is going to get ugly.” Rich tells her “No matter what happens I have your back.” Anais is happy to hear this.

Safaree meets up with Dream to talk to her about their relationship, He asks her “Are you seeing anyone else? Does anyone else have your attention?” Dream tells him “Well you were lacking and when you’re lacking what do you think is going to happen?” Dream moves on and tells him “I heard that you were working with Mariah. She wants everything I have and she said she was going to take you from me.” Safaree tries to explain himself, but Dream doesn’t want to hear it. She tells him “If you respect me you have to respect my wishes and I don’t want you working with Mariah.” The discussion breaks down when Dream doesn’t hear what she wants to hear and she storms off.

Mo is auditioning leading men for her video. When Karl shows up he kicks the other men out and Mo becomes frustrated. She tells him “You don’t just show up to the audition late, kick these guys out and think you got the job.” Karl seems frustrated. He asks “Do I have the job or not?” Mo tells him “No, you don’t.”

After his frustrating talk with Dream Safaree goes to work with JuJu’s play. JuJu tells him that she has broken up with her long-term boyfriend. After rehearsals are over he sits down with her to talk about the long-term relationships they have both endured. He tells her “You don’t have to be a wild and crazy party animal, but you can have fun.” JuJu is a bit nervous. She asks him “Are you trying to invite me out?” Safaree says “Yeah I just wanna take you somewhere that I rented and I had fun after my breakup.” JuJu says “I don’t know. I’m single but no mingle.” Safaree laughs and after a bit of cajoling, he gets her to agree to go out with him.

Snoop’s sneaker line release party is going very well. Everyone is having a great time. Safaree and Mariah Lynn are performing. After they are done performing Mariah goes over and tells Safaree “I really wanna do that collab with you, so you gotta let me know if you’re serious.” Safaree tells her “I’m serious, but I heard about what happened between you and Dream.” Mariah says “This is about money and you can’t let personal get in the way of business.” While they are talking Bri decides to make it her business to go over and interrupt the conversation in defense of Dream. Safaree introduces the two women and before two words can be exchanged Bri throws a drink at Mariah. Mariah swings back but quickly steps back and apologizes.

Rich is helping to promote Anais at her meet and greet. Jonathon shows up and tries to convince her that it’s not a good idea for her to get involved with Rich. While they are talking Rich walks over. He tells Jonathon “This was not planned. We just started kicking it and things happened.” Jonathon tells him “She’s married.” Rich responds “The marriage is over.” While they are talking Rueben walks in and starts asking questions.