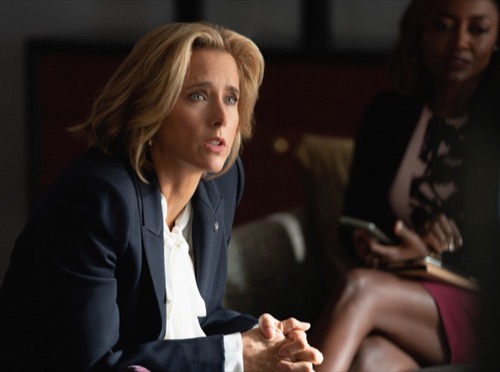 Tonight on CBS Madam Secretary airs with an all-new Sunday, November 04, 2018, season 5 episode 5 called, “Eyjafjallajökull,” and we have your Madam Secretary recap below. On tonight’s Madam Secretary episode, as per the CBS synopsis, “When the eruption of an Icelandic volcano strands Elizabeth at an airport in Ireland with the Turkish foreign minister, she tries to broker a deal with him to save the lives of thousands of Syrian refugees. Also, Henry gives advice to Alison about an awkward topic.”

Liz is helping Henry pack for a conference in Bangkok where his ex-girlfriend will be. Liz is a little jealous. Henry reassures her. They talk about when to tell the kids she will be running for president. Jason calls to them, his college counselor has arrived. Jason has been accepted to three colleges.

Liz arrives at the office. With talks about luncheons and a memoir, she is already having a bad morning. Meanwhile, Henry meets with his former girlfriend Roe at a restaurant in Bangkok. They haven’t seen each other in 25 years. They show one another photos of their families.

Liz meets with the author Mike B. Has set her up with. She promises to make Liz’s life painless as they write her life story. Liz is on board but hesitates a bit when she is asked to write about how she first thought she could be a leader.

Roe extends her hands and holds Henry’s as she tells him how glad she is to see him. Henry seems a little uncomfortable and tells her he needs to get some rest before the jet lag hits him.

Matt begs Blake to find out what the meeting was about but he tells him he cannot share.

Roe takes the stage at the conference and gives her speech, insulting the king. Thailand officers arrest her on the spot. Henry calls Liz who tells him that there is not much you can do. But they do have a dinner coming up where he can ask for a royal pardon.

The kids watch a promotional video of their mom as a candidate. Jason gets upset and leaves. Meanwhile, Henry meets with the king and asks for a favor in regards to Roe. He is shocked when he finds out that the king will grant Roe a pardon.

Liz has lunch with her brother. She is having trouble trying to come up with the moment she decided she wanted to be a leader. She breaks the news about her run to her brother. He is thrilled.

Henry goes to get Roe out of prison. She is mad he did what he did. She will be discredited as a heretic.
Jason finally reveals to Liz that he is not ready to go to college. They get to talking and he tells her he might not be able to be the perfect student. He also knows that she is planning to run for president. The door rings. She has a meeting and she wants to cancel but he tells her not to.

Liz meets with her memoir author. They talk about her personal life, her parents and her family. Following the meeting, Liz calls Mike B. to yell at him for allowing an ad to run about her. She tells him no more book.

Henry and Roe are on their way to the airport when they get pulled over. Soldiers grab Roe. Her pardon is no longer valid. The king has died. Henry goes with her.

Steve talks with Jason who shares that he is afraid he will screw up in college and cost their mom her run. Meanwhile, Liz heads to the office to deal with Henry’s arrest and the uprising in Thailand. They find out he is being held in a prison. Dalton wants to send black ops in to get him to safety.

The ops come in to the prison and get Henry out safely after taking out one of the prison officials. Liz meets Henry and Roe when they arrive safe back at home.

Matt asks Liz if she is trying to replace him. She laughs. She was going to write a book and that was all it was about. She tells him she appreciates him. He hugs her. It has been a rough couple of days.

At home that night, Jason tells them he is going to college. Liz reveals that she is running and the kids are happy.