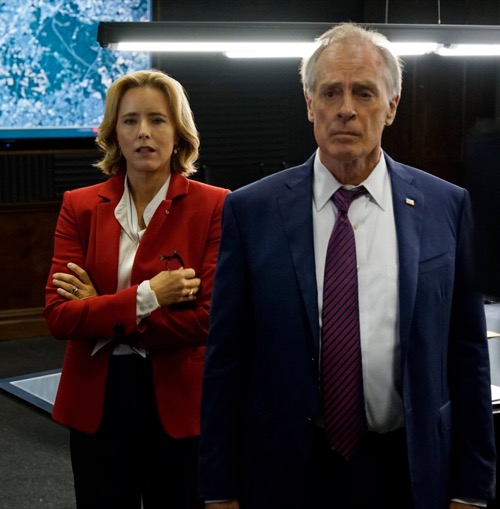 Tonight on CBS Madam Secretary airs with an all-new Sunday, December 9, 2018, season 5 episode 9 called, “Winter Garden,” and we have your Madam Secretary recap below. On tonight’s Madam Secretary episode, as per the CBS synopsis, “Elizabeth and Jay work to keep a historic agreement between Serbia and Kosovo from falling apart after a mass grave is discovered in Serbia dating back to the Kosovo war. Also, Henry deals with a bizarre encounter with Secretary of Defense Gordon Becker.”

The State Department considered it a coup when they got both Serbia and Kosovo admitted to NATO on tonight’s all-new episode.

The Russians had funded a far-right attack on the White House and in retaliation, the White House wanted to remove its key support in the Balkans. Hence why they pushed so hard for both Kosovo and Serbia to be admitted into NATO. They wanted everyone to see how they brought together these two counties that were at each other’s throats years ago and so the fact they managed to accomplish this was very important to them. They let everyone know what they did. They accepted the praise and did a victory lap, but the United States was a little premature with congratulating themselves. They later learned that Spain was willing to back out of the agreement and that their ally couldn’t admit either Serbia or Kosovo into NATO.

The ambassador for Spain had met with Secretary McCord and she told the secretary that people in Spain were receiving online threats. They were told that they could be killed and were threaten with another Catalan movement if they didn’t stop supporting the Balkans. Both the ambassador and the secretary knew that these threats were coming from Russia. Russia had started an online campaign with fake news and they wanted to get to everybody. It was released online that a mass grave had been found in Kosovo and that the grave dates from the genocide in Kosovo carried out by the Serbians. Serbia, of course, denied it, yet once the information was out there, it managed to reach everyone fairly quickly.

Kosovo later backed out of their agreement to join NATO because they said they could no longer work with Serbia. Serbia, on the other hand, knew that there wasn’t a mass grave and indeed the rumors proved to be fake news. There was no recently found mass grave and so Serbia was still willing to go ahead with the agreement. It was Kosovo that refused to be cooperative. They said that all the hurt and pain from years ago had been stirred up again and so they couldn’t work with Serbia. Meanwhile, Serbia was reporting that people were attacking them and that riots were being formed against them because “rumors” were being used against them. A young Serbian boy was killed because it was reported online that he stole his Albanian friend’s bike.

Secretary McCord knew that if things escalated that Serbia would retaliate and that it might lead to war. So she and her department thought of ways to shut down Russia’s fake news. They went to the online provider that was allowing fake videos and newsfeed to show up in people’s search engines. They threaten to remove their government subsidies if they didn’t stop supporting the other side and that stopped one way in which fake news was being planted online. The other way of stopping them was targeting the farms. The computer farms were where a group of Russians planted fake stories online and so the United States technical a cybercrime. They started a fire at one of these farms. It was the one that was specifically stirring unrest in the Balkans.

The Americans also decided that while they were at it they could information from the servers that the Russians were hiding. It led to definitive proof that Russia was behind it all and so Secretary McCord showed what they found to the representatives from Kosovo and Serbia. The two countries were also given a lecture on what cooperation could do for them and so it was hoped that if an agreement couldn’t come this year that maybe it could one day happen in the future. The secretary had learned a lesson about rushing ahead to carry out things she believed in and from now on she was going to take a lesson from her good friend Russell. Russell had warned her about announcing their initiative before it was ready and so it doesn’t hurt to be cautious.

Russell himself had a busy day when he fired the president’s doctor. The man had been handing out drugs without a prescription and he gave it to someone that Dr. McCord was acting out of character. Now, the doctor didn’t want to be known a someone that got people fired though he learned that what he did had been the right choice. He couldn’t have sat on the information and so he made a tough a decision in the White House – what’s new?!