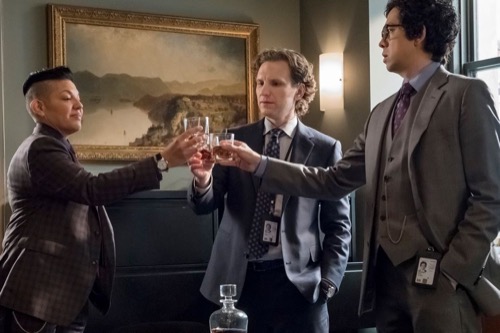 Tonight on CBS Madam Secretary airs with an all-new Sunday, March 11, 2018, season 4 episode 13 called, “Reading the Signs” and we have your Madam Secretary recap below. On tonight’s Madam Secretary episode, as per the CBS synopsis, “Elizabeth seeks creative solutions when the president of Sri Lanka’s psychic convinces him to not move forward with a trade agreement with the U.S. Also, Alison grapples with guilt for missing the warning signs after her college roommate attempts suicide, and Henry makes an abrupt career decision.”

Liz loads the dishwasher as she talks to Henry and Jason about meeting the president of Sri Lanka. Stevie comes in. She has been teaching herself how to say hello in their language. Ally shows up home for Spring Break.

Jason comes in to see the team and update them on what they need to prepare for. It is revealed that the president of Sri Lanka will have his psychic with him when Liz meets them. This gets a laugh out of Matt.

Ally gets off the phone in a huff. She is having roommate troubles. Henry tries to give her advice about her friend Lucinda who is high maintenance and very needy. She doesn’t want to hang out with anyone but Ally.

Liz and Jay welcome the president of Sri Lanka who sits with them for tea. His psychic would like to give a reading. As they try to talk politics, Ranuga the psychic, leans towards the president and whispers in his ear. He tells the room that that they cannot move forward with the trade agreement. He is afraid the spirits think it would be bad.

Liz walks with the president of Sri Lanka trying to explain that maybe the psychic was wrong. Meanwhile, Ranuga meets with Jay, Kat, Matt and Daisy as they show him around. He gives them each a reading. He tells Matt he knows he is childless, Daisy is lonely and Kat needs to start taking her brother’s calls even if he is boring.

Its night, Henry and Liz talk about their day. Ally comes in. She shares that she is heading back to the dorms tomorrow to deal with Lucinda.

The next day, Liz is at the office. Ally calls. She is upset. She found her roommate on the floor, unresponsive with a bottle of pills next to her.

Liz and Henry head to the hospital to meet Ally. Lucinda is going to be okay. Lucinda’s parents thank Ally. Meanwhile, Kat and Jay have gotten down to the bottom of why Ragunda would call the trade agreement bad. His family’s company would be in jeopardy.

Kat and Jay tell Liz about what they discovered. They have a plan. Liz meets with the president of Sri Lanka again. Liz offers a new development; they will only hire local labors and telecomm companies in Sri Lanka. Ragunda tells the president that he needs to discuss this again with the spirits.

Liz and the family sit down for dinner. Liz shares with Ally that Lucinda’s mother told her Lucinda has struggled with anxiety and depression for awhile prior to college. Ally excuses herself to go upstairs. She comes back down, angry at Jason for moving things in her room. That night, Liz tells Henry she is worried about Ally’s own mental health.

The next morning, Ally gets down on herself, telling Henry she is mad that she didn’t see how much Lucinda was hurting. Ally asks about Henry’s experience with his own father who committed suicide. Ally shares that she needs to head back to school.

At work, Liz deals with China honing in on her trade agreement with Sri Lanka. Meanwhile, Ally sees Lucinda on campus. They hug. Lucinda is sorry Ally had to find her like that. They say goodbye before Lucinda goes home, leaving college. Ally goes to her empty dorm room.

That night, Liz and Henry talk about work and Ally. Liz just wants to go get her. Her cell rings. She heads into the office to meet with the president of Sri Lanka. She tells him she knows he is in a financial free-fall. She tells him he is making a big mistake, selling out his country’s sovereignty.

In the morning, Liz calls Ally to make sure she is okay. Ally tells her she can’t talk, she is headed into class. They hang up and Ally sits on a nearby bench.

Liz gets called into the acting president Theresa Hurst’s office. She doesn’t want to move forward with the trade agreement with Sri Lanka. Liz tries to object, but Theresa won’t budge. Liz tells her team. After they finish their talk, Kat wants to ask her personal question. Before Kat can finish, Jay comes in. Ragunda left a word for her – just one single word. Jay passes it to Liz. It says “run.” Kat asks a second later if Liz has considered running.

At work, Henry cannot get the funds he is looking for. He tells the entire table he has decided to resign. He wishes them luck and leaves.

Kat, Matt and Jay meet in the office for a drink. Kat tells them that her brother called again. He is getting a divorce. Kat gives a brief speech, encouraging Matt to tell Daisy he cares about her. Jay chuckles. Not Daisy again. Jay tells him to go with his gut if he is serious.

Henry and Liz connect by phone. They both think that Ally isn’t doing well. They meet at her school. They cannot find her. They call her. She finally picks up. She is at home. She tells them she is moving back home if it is okay and she can commute. They are more than happy.