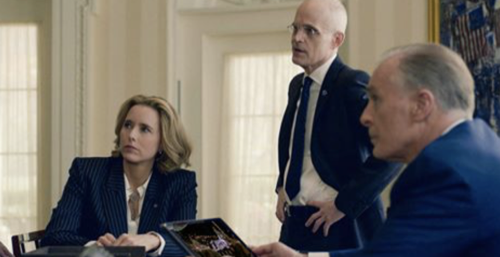 Tonight on CBS Madam Secretary airs with an all-new Sunday, May 13, 2018, season 4 episode 21 called, “Protocol” and we have your Madam Secretary recap below. On tonight’s Madam Secretary episode, as per the CBS synopsis, “When terrorists threaten to cause a flood in the Middle East that could kill millions of people, Elizabeth’s hopes of getting a neighboring country to close the dam fade after the government suddenly goes dark during a coup. Also, Stevie is tasked with finding Russell an activity that will help manage his stress.”

Soldiers in Northern Iraq enjoy food together. One soldier is on the lookout. Gunfire erupts.

Liz is eating in anticipation of her upcoming fast for Ramadan. Henry teases her but joins her after she threatens no sex for a month.

The next morning, Blake tries to give Liz her usual breakfast muffin. She turns him down. The team meets. Liz is called to the White House right away. A dam in Iraq is the target of rebels who are demanding their leader and 2,000 so fighters being imprisoned be released or they will blow up the dam.

Russell’s wife drives him to the office. She is yelling at him for his high-stress levels and heart issues. She sees Stevie holding a coffee and waiting for him. She snaps at her. Russell promises he will do something, yoga, Pilates.

Liz meets with Dalton, Russell and the others. Liz thinks they need to slow or stop the flow of the Tigris which isn’t far from the dam. Dalton, Liz, and the ambassador for Turkey chat by video with the leader. He is willing to slow the flow but he has his own demands about his county’s upcoming election that Dalton just isn’t willing to give them.

Kat tries to get in touch with her contacts at the Turkish government but fails. Meanwhile, Blake takes on a project for Liz. He must assist in planning the Iftar.

Stevie meets with Henry for lunch. He is starving while Stevie eats and talks about Russell.

Liz meets with Dalton and the others about the lack of communication from Turkey. Their leader has gone on vacation and it seems no one is in charge. They don’t know what to do about slowing or stopping the flow of the Tigris. They get in touch with the Prime Minister of Iraq. He does not know what to do other than organize a strike that the US feels will be dangerous and is doomed to fail. Gordon tells them that there will be resistance in sending in our own troops. It would be suicide.

The planners for the Iftar get upset when Blake demands they make time for Liz to meet with the Turkish official, Hakan. They feel that would cause a diplomatic crisis. Blake relays to them that Liz is in the middle of a humanitarian crisis.

At the Iftar, Liz speaks about Ramadan and what it means. The plan goes accordingly. Liz gets Hakan alone in the elevator. She begs him to help. He is scared he cannot defy his president.

Liz learns that Hakan came through for them, but the Turks president has reemerged from his vacation. Dalton tells Gordon to send the SEAL team in after Liz mentions that he is going to release the flow at the Tigirs.

The team goes in and deactivates the rebels. They take over control. The dam is secure but with casualties. Liz tells Dalton that Hakan did a great thing for all involved. They need to offer him asylum. He reluctantly agrees. Liz and Jay meet Hakan and his family at the airport. He thanks them.

Russell sits with Henry to talk about his stress levels. He tells Henry when he was a kid he made model airplanes. He loved it. He loved that you had to be precise and follow the directions. Henry talks him into trying it again. Hours later, Russell sits to build a plane.

Liz and Blake thank the team behind the Iftar. Kat comes to see her report that there was an attack in Turkey by Russian mercenaries.