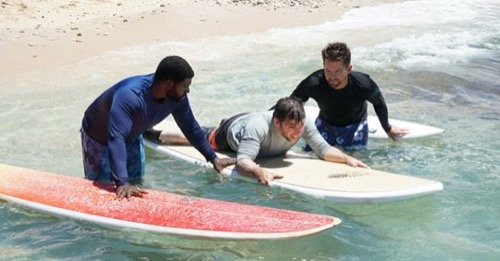 Tonight on CBS their reboot of the classic series Magnum P.I. premieres with an all-new Monday, November 05, 2018, episode and we have your Magnum P.I.recap below.  On tonight’s Magnum P.I. season 1 episode 7, “The Cat Who Cried Wolf,” as per the CBS synopsis, “Magnum takes the case of a little girl’s missing cat and, in the process, stumbles upon another cat’s murdered owner who happens to be an FBI agent.”

Magnum was desperate for a case when someone called on tonight’s all-new episode of “Magnum PI”.

Its been a few weeks since his last case ended and so Magnum wanted something as in anything he could get his hands on when a family reached out to him. This family had apparently lost their cat. The cat’s name was Mittens. He disappeared a while ago and one person in the family didn’t want to give up hope. It the little girl Cecilia. She was the one that called Magnum and she offered to pay his going rate because she thought it would be something she could afford. Luckily for her, Magnum decided to lower prices and he was willing to charge a quarter a day to find this missing cat. And he didn’t even like cats because he was allergic to them and so he was really taking on this case because he didn’t want to break Cecilia’s heart.

Magnum found out what he could use to lure the cat back. He then went out to the family’s home and camped outside with feed hoping that the cat would be hungry enough to come home. Magnum camped out all night and it wasn’t until the next morning that he saw a cat. He at first confused this cat with Mittens and he hadn’t known better until he picked it up. He didn’t have freckles and it wasn’t Mittens. It was a completely different cat and somehow it had gotten blood on its paws. Magnum understood that sometimes cases took a different turn, but he never suspected that he would find the wrong cat or that it would lead to the altogether new case. He knew that he needed to find out where the blood came from and so he brought it back to his guesthouse.

Magnum’s allergies had been too bad for him to hold the cat long enough and he had to reach out to Ms. Higgins for help. She held the cat long enough for them to put a tracker on it and she came with them when they released the cat in order to retrace his steps. Higgins had said that she needed to be around in case Magnum’s allergies got the better of him and the truth was that she had been curious. She wanted to see where the blood came from as well and so they followed that cat for an hour only for him to lead them back to a house. They tried knocking and both were alert to there being something wrong when the door was unlocked. They went in to see if they could the owners and they found alright.

The poor guy had been dead on his kitchen. Based on his color and where he was wounded, Higgins had known instantly that he was dead. It was Magnum that hadn’t wanted to give up hope. He checked the man for a pulse and sadly didn’t find one. He and Higgins then looked around for a bit and they found a ski mask. It probably came off during a struggle and so they were going to continue their search of the property when someone made a run for it from the back room. Magnum gave chase and he almost caught up to him when they ran into traffic and Magnum was hit by a car. He had needed to be taken to the Emergency Room and while he was there he called “911” about the homicide.

Magnum informed Detective Gordon Katsumoto about what he and Higgins found. The detective asked to be showed this house and the victim yet they went to the house and didn’t find a body. There was no trace that a crime had taken place and so the detective locked down the scene more on Magnum’s say so rather than actual evidence. The police said they would get around to searching the house and they told Magnum not to interfere. They didn’t know that Magnum had become too invested. He wanted to see this case to the end and so he had his friends find that cat again. Higgins also did some research and she found out the house once belonged to the Hawaii Syndicate before it had been confiscated by the feds.

The cat was eventually found and the chip it had was checked. Magnum and Higgins grabbed the cat and went to its actual home where they some very telling photos. The photos showed that the murdered victim had been the cat’s owner and they soon learned that his name was Colin Francis. Francis had been a federal agent and he had been storing someone at the house. He had set up some cameras there and they learned that his informant was Robert Frasier. He was an accountant that accidentally stumbled across a scheme to keep funding the syndicate and so he turned against them. He offered to testify against them in exchange for protection for him and his family. Robert had been staying at the house when Francis came in one day and said that his computer had been breached. And that he believed whoever breached his computer was a federal agent themselves.

Higgins and Magnum kept watching the tape until they saw Francis fighting his assailant and telling Robert to make a run for it. The two knew that they had seen enough and so they brought the tape of what happened to Katsumoto. Katsumoto viewed it and he recognized the killer. The killer was Carl Nadella and he too was a federal agent. Katsoumoto worked with him on a past case and he was going to ping the suspect’s phone to get his location, but he hadn’t wanted to alert Nadella or worse spook him into running and so he wanted to go bring this man by himself. Only neither Higgins and Magnum were going to allow that. They followed Katsumoto and acted as his backup. They later learned that Nadella was trying to lure Robert to the site and so they moved to protect him.

They just weren’t aware that Nadella had given up on Robert. He had seen Magnum alone and he took him, prisoner. He held a gun on the P.I to get Magnum to drive them out into the middle of the ocean and he was going to kill him before dumping the body. However, Magnum and Nadella got into a fight on the boat and they both went overboard. They managed to grab a floaty and so they drifted until Magnum’s friends found them. Magnum was rescued and they got to turn over Nadella to the police. And so the only one Magnum was going to be disappointing was little Cecilia.

He walked up to Cecilia’s home and was going to break the news to her when it turns out he didn’t have to.

Cecilia followed his advice by leaving her window opened and Mittens returned all on his own.