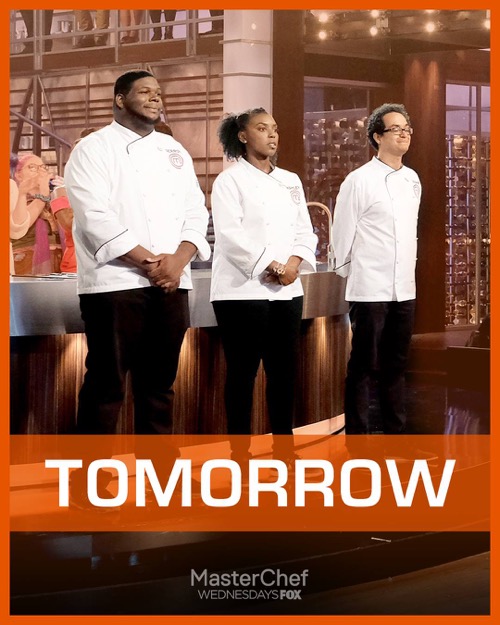 Tonight on FOX Gordon Ramsay’s Masterchef continues with an all-new Wednesday, September 19, 2018,  season 9 episode 22 & 23 called “Finale – Winner Chosen,” and we have your weekly Masterchef recap below.

On tonight’s Masterchef episode as per the FOX synopsis, “In the Season 9 finale, the three remaining home cooks face their final challenge when they are each asked to prepare a three-course menu for the judges. The home cook with the best overall menu will be crowned the winner.”

Things were a little different on tonight’s grand finale of “MasterChef”. The judges had become mentors this season. They had had time to develop these home cooks they were mentoring and create teams however their teams were slowly whittled down over time and so going into the grand finale they had been all been left with one contestant per judge. This means that all of their hopes fall on this contestants and that led to a problem because they all wanted to win. The judges had wanted to win so bad that they had even touched base with their mentees afterwards. The contestants had been given the chance to go home and they had been surrounding by friends and family when their mentors arrived.

The judges had gone over what they were each going to cook in the finale and they left no detail to pass them by. The judges had a foot in the race and they hadn’t wanted to lose because the contestants let the pressure get to them, so each course was discussed. There were going to be three courses in all and each had to be spectacular. The judges and the contestants had talked things over and eventually they all settled on a dish that was a restaurant quality but no one would know how they turned out until these home cooks managed to execute their dishes. The contestants returned to the kitchen when all was said and done and they were some nerves only there was also some excitement.

All of their families had been there. There had even been the former contestants who returned to see this final battle and so soon the finale kicked off before anyone had noticed it. The contestants had all rushed into the pantry to grab their ingredients and only then did they start cooking. Everyone watched and made comments yet they all been worried. They worried that the dishes would be enough or worse that something would be undercooked. Except for the round of dishes hadn’t been too bad. Ashley had created a Pan-Seared Red Snapper with Conch Salad, Malanga Fritters, and Aji Coconut Sauce for her appetizer and it had looked good. The taste, on the other hand, was something the judge weren’t in agreement on.

Joe hadn’t cared for the dish. He felt the heat had been too overwhelming and said that the fish had dry. The judge had hated the dish so much that he said Ashley had been too ambitious though the others hadn’t had such problems. Their fish had been perfect and the only thing that hadn’t worked for Ramsay had been coconut sauce while Sanchez hadn’t been negative. The next dish the judges tried had been Cesar and his dish was better received. He created a Squid Ink Infladita with Lobster, Dragon Fruit Salsa, Caviar and Roasted Poblano Sauce. The flavors had been there for Joe only there had been a few problems with the other judges. Sanchez hadn’t cared for the addition of the dragon fruit because he didn’t care for that particular fruit.

Ramsay meanwhile had disliked the addition of the caviar. He thought that was a waste of a salty luxury and had told Cesar so, but the next dish had been Gerron’s. Gerron went back to his roots and he created a plate of Nashville Hot Quail with Fingerlings Potato Salas and Poached Quail Eggs. It was an elevated dish of what won him a seat this season and so the judges had wanted to see what he did with the quail. Gerron had never cooked before and his dish hadn’t tasted that well. It had been a wonderful cooked quail and the judges had enjoyed the dish as well as the plating that Gerron had been working on. And so the only thing they hadn’t liked about the dish had been the cohesiveness.

They felt the potatoes with the quail hadn’t been right and so Gerron explained how he wanted to stay true to his roots, in which they put anything fried with potato salad and so the judges had understood that. Only Joe had worried that Gerron was too stuck in his ways. The judges had wanted the contestants to challenge themselves and unfortunately, some of those challenges hadn’t worked out. Back in the kitchen, Cesar had started cooking something that couldn’t possibly be finished in his allotted time and at the last minute, Ashley had burnt her collard greens. She had put more back on the stove and so once again time management proved to be a problem for her. Everyone had been scared for her and they hadn’t known she would be ready in time until suddenly she just was.

Ashley’s dish had looked perfect in the end. She created a Pan-Seared Guinea Hen with Black-Eyed Pea and Collard Green Ragout and Quince Cognac Sauce. The cook on the hen had been perfectly executed and the flavors had finally won over. This included Joe who had called it a great dish and had wanted more not less. The next person to be called down was Cesar. Cesar had created a Pan-Seared Duck Breast with Charcoal Roasted Vegetables and Almond Mole and it was the Mole sauce that he had problems with. No one had believed he could pull off that sauce and so the fact that he did is an accomplishment yet it wasn’t as important as Cesar made it out to be. The chef had called it the star of the dish and the judges had told him that no the true star was the protein.

The sauce was never going to be more important than the protein and Cesar had chosen to cook one of the hardest things out there – duck breast. The judges chose to first cut into the duck breast because they had wanted to know if it was cooked properly and right away they could see that the duck breast was overcooked. Cesar had overcooked all three of the duck breast and, so while the judges had loved everything else on their plate, they hadn’t been able to get past the duck. The last entrée they judged had been Gerron’s. Gerron had created Carabinero Prawns with Heirloom Grits, Shellfish Au Jus, and Crispy Shallots. It had looked wonderful and it had tasted great however Joe still hadn’t been sure if Gerron was playing things too safely.

Joe had asked Gerron about it and Gerron said that it was more than just staying true to his southern roots. He explained how he was telling his story and his story was about where he grew up as well as his family. It had been his mother that loved shrimp and grits, so Gerron had elevated the dish as his entrée and he wasn’t going to throw in something French. The next portion of the competition was dessert. The contestants had all turned to their roots for this one. Ashley wanted to elevated her spicy chocolate route by going back to her own French roots and Gerron chose to elevate a dish that his own grandmother taught him.

Cesar had wanted to elevate a Mexican dish that he grew up with though he hit a setback when he cut himself in the kitchen. It had been a pretty bad cut. There was blood everywhere and Cesar had needed to seek medical attention with five minutes on the clock. So that cut came at the worst possible moment! Cesar had taken a minute away from himself as he seen to and so he had had to rush the next part. Luckily, he hadn’t been the only one rushing because Ashley again had time management problems meanwhile Gerron had had a drip problem because his sauce had accidentally leaked out of the bottle when his nozzle wasn’t tightened enough.

The first dish that was judged was Gerron’s. He created an Amaretto Chess Pie with Raspberry Coulis and Popped Sorghum yet some of that coulis had gotten everywhere and so this was the first dish that he hadn’t felt truly comfortable with. Gerron knew he could have plated the dish better if he had had more time and so he hadn’t bothered to defend his dish when the judges complained about the sloppy coulis. Other than that, they had loved the dish and they loved that all three of Gerron’s dishes had told a story about where he came from and where he was going. It was true southern cuisine and even Joe had saw that in the end.

The next dish to be judged was Cesar’s. Cesar created a Flourless Chocolate Cake with Tamarind Caramel and Spicy Pepita Brittle. The true test of the cake was if it fell apart and it hadn’t. It had held together and the flavor had been there. The judges had loved his dish and they liked the risks he took. It had paid off for Cesar and the next dish they judged was their last. Ashley created Orange Genoise with Smoked Chocolate Ganache and Glazed Cherries. The dessert had looked so beautiful that it could be mistaken for a piece of art. It had also tasted great and so the judges called the dish flawless. It had been so well-executed that Ramsay had been proud to call her his protégé. And so the judges had a hard time with deciding the winner.

Cesar had the best appetizer, Ashley had the best entrée, and each contestant had had great desserts but Gerron had remained the most consistent.

The judges had thought about everything before they came out to the audience and by then they had come to a decision.

They decided the next winner of MasterChef was Gerron.

He had a great appetizer, a great entrée, and a great dessert!