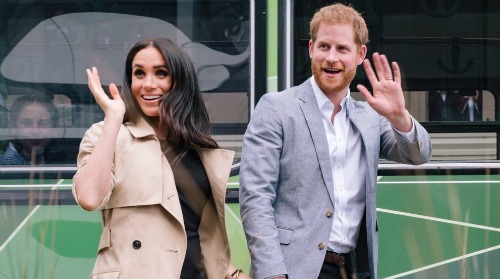 Meghan Markle is fast becoming one of the most stylish women in the celebrity world, but it looks like she just had her first embarrassing wardrobe malfunction as a royal. New photos have surfaced of the Duchess of Sussex wearing a see-through skirt while she was greeting her fans in New Zealand this week. Meghan Markle and her husband Prince Harry have been visiting New Zealand, Australia, Fiji and Tonga, as part of their first international state tour together.

And while many fashionistas from both sides of the pond would agree that Meghan’s style so far has been on point, the Duchess  of Sussex probably didn’t realize that her skirt was totally see through while she and Harry took a minute to greet fans in Rotorua, New Zealand.

Meghan Markle wore a stylish cobalt blue Givenchy short-sleeve sweater with a knit skirt and suede, navy heels. What she didn’t realize was that her skirt was totally see through, showing off more than what she had anticipated as royal fans caught a glimpse of what she was wearing underneath.

Of course, this isn’t the first time that a member of the British royal family has had an embarrassing wardrobe malfunction in public. In fact, this has happened many times in the past to Meghan Markle’s sister-in-law, Kate Middleton. The Duchess of Cambridge made headlines back in 2011 when her skirt was caught in the wind during her state trip to Canada.

The same thing happened to Kate Middleton during her tour of India in 2016 and again during Princess Eugenie’s wedding at Windsor Castle earlier this month.

For Meghan Markle though, she’s managed to keep her dignity intact for the most part. Still, her stylist Jessica Mulroney probably didn’t realize that the dress fabric was so thin that people could see what was underneath Meghan Markle’s skirt. Either way, the former Hollywood actress didn’t seem very concerned about it.

In fact, she continued to meet and greet her fans, even though the media and photographers were documenting the entire moment nearby. It’s safe to say that Meghan won’t be wearing the same skirt in public again, of course.

So far Buckingham Palace has not made any comments about the Duchess of Sussex or her wardrobe malfunction for that matter. In the meantime, don’t forget to check back with CDL for all the latest news and updates on Meghan Markle, Kate Middleton and the rest of the royal family right here.