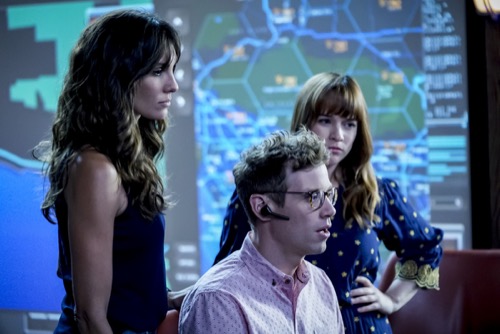 There was no one that could protect Mosley from herself on tonight’s all-new episode of “NCIS: Los Angeles”.

There was a price on Mosley’s head. She knew that and so she entrusted her son to Sam while she went dark. Mosley was supposed to be in hiding where no one could find her and unfortunately, someone did. She met a guy over drinks and, after she followed him back upstairs to his hotel room, they got into a fight to the death. Mosley overcame her would be killer and then fled town again however she was now the chief suspect in her date’s homicide and so the BOLO out for her arrest became public knowledge. It was spotted by Eric who had his own alert for her and it was probably seen by several cops willing to pass on the information to the cartel. She was in trouble and the team knew that they had to reach out to her.

Only first they contacted the Deputy Director Ochio. They needed the clearance to go Las Vegas and see what they could find from the crime scene yet learned something from the Deputy Director. He mentioned how LA really is the graveyard. That’s what their office is known as at Quantico and its sort of true. There have been several agents with great careers that have come and died because things got out of hand. The Deputy Director said that at first he had ignored the rumors and that changed because now with Mosley he doesn’t think it could end in any way besides Mosley’s death. The team, on the other hand, hadn’t been so sure. They went to Las Vegas and they said that there was on the way that Mosley would have gone into such a situation blind.

They believed that she knew her date was the cartel. She went up there because she thought she could get the better of him and the fight had turned nastier than she thought. Sam and Callen had seen the wreckage for themselves and they suspected that Mosley had gotten hurt in the fight. They also wanted to know why she followed the guy if she suspected him and it turns out Eric knew the truth. He later informed them that Mosley had logged into NCIS because she had been looking into the cartel members. She was apparently hunting them down and she was prepared to make deals with the devil in order to get help. She had been looking into Ella Juanega who wasn’t involved with the Molinas Cartel and appeared to be a businesswoman. And so Ochio told them about Ella.

Ella Juanega was a rival cartel leader. She hated the Molinas because they killed her boyfriend and so Ochio believed that Mosley would be willing to cut a deal with Ella to take down their common enemy. He also warned the team that Mosley would most likely have to make a trade and unfortunately no one knew with what. They wanted to play it safe and shut Mosley out of NCIS though they hadn’t wanted to alert the Special Prosecutor. Special Prosecutor Rogers was still in town looking for any dirt he could dig up on the team and they were all making the effort to not to draw attention to themselves. The team thought they shouldn’t alert Mosley and so they chose to simply track her down. They planted a bug at Ella Juanega’s house.

They then waited until Mosley contacted Ella and went to meet her. Their former boss had no idea that they were listening and so they heard her as she offered Ella a file on the whole team. She told the other woman it would help keep her business under the radar and all Mosley wanted in return was a million dollars. She needed funds to disappear with her son and she didn’t care when Ella questioned using the file to kill everyone on the team. What she didn’t know was that the team heard everything. They pulled over Mosley as she was driving away from the meeting and they were going to arrest her. She committed treason when she turned on her team and they would have liked to have brought her in, but there had been a shootout and Mosley escaped.

Mosley had tried to tell them that she wouldn’t betray them. They just hadn’t believed her and they had a hard time tracking her down again. They instead used the phone she stole to gather information on her and she said contacted the Molinas. She told them that she was bringing them a friend and so the team looked into who could that be. They were all accounted for and the only one that wasn’t was Arlo Turk. He had been the man that burned his cover with the cartel to help the team escape Mexico and so the team pinged Mosley’s phone to find out where the trade was happening. As it turns out Mosley had set up a meeting with Ella Juanega at the same time and at the same location. She was going to push them into starting a conflict and hope that she could survive the fallout.

The team as they were at the site that Arlo Turk was in on the plan. He had a gun when the second shoot-out happened and eventually Callen had gotten the chance to take in Mosley. Only Mosley informed she never sold out the team. She handed over aliases and gave no credible information. She asked to be let go and Callen had no other choice to allow it. He and the others had talked to Arlo after the shooting had been over and they found it had been Arlo’s plan. He was going to use the shoot-out to take out two cartel leaders at the same time and Mosley was going to escape in the chaos. She really was going to go on the run with her son and with Ella’s money though before she left she had given the team a gift.

Mosley took full responsibility for what happened in Mexico and the team was now in the clear with the Special Prosecutor.

They were even informed that Hetty could come back.