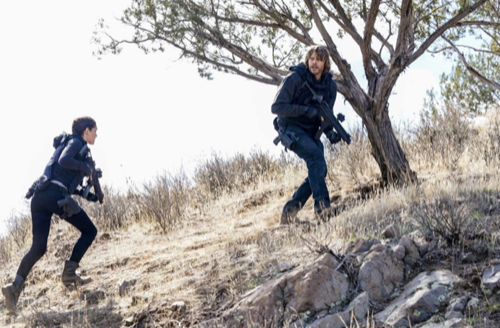 Tonight on CBS NCIS: Los Angeles returns with an all-new Sunday, May 13, 2018, season 9 episode 22 called, “Venganza” and we have your weekly NCIS: Los Angeles recap below. On tonight’s NCIS Los Angeles episode, as per the CBS synopsis, “NCIS investigates the murder of a federal prison inmate who was the adopted daughter of a notorious counterfeiter. Also, Callen is summoned by the ATF Internal Affairs board to discuss Anna Kolcheck’s actions during a joint NCIS and ATF case.”

Callen had hated the new coffee place that replaced his old one because he didn’t like change and so everyone had made fun of it because of his old man ways. They told him that he was cutting himself off from enjoying what else was out there and eventually their words left an impact. Callen thought maybe he was being a little stubborn and decided to try out meditation of all things because he figured why not. He downloaded the app and had closed himself off in a dark room however he claimed it had been easy to clear his head and so Sam had had some questions. He couldn’t see how Callen could have meditated for little under two minutes and told his friend that maybe he did it wrong.

Callen, on the other hand, said he maybe he was able to master it faster than everyone else. He did it for the clarity and he claimed he got it, so Callen did his best to ignore Sam skepticism because the two had gotten called in on a case. The case revolved around Claudia Diaz. She was a Peruvian counterfeit princess that had been raised by Alphonso Marca and she turned on him to make a deal with NCIS on a different case. Claudia had gone to prison following her run-in with NCIS and they had thought everything was fine until they got the call that she had been killed in prison. She had gotten into a brawl with two women and had gotten stabbed with her own shiv though NCIS had been asked to investigate her death to determine whether or not she had been assassinated.

The two women she had gotten into a fight with were both Peruvian and so both Sam and Callen had gone to the hospital to talk to them. The ladies had each been injured in their fight with Claudia and the agents believed they might have to apply pressure to these women to get them to talk, but they got the chance to even approach them. The women had been murdered by someone lurking around the hospital and the guys had tried to capture their suspect only for him to die before they could. They had chased after him and had been there when he tried to jump from one building to another. Unfortunately, he had fallen too short for reaching the next building and so the team had lost a promising lead.

They still looked into the deceased and found out he too had been Peruvian. It hadn’t been much to go on yet the team was able to form a working theory and they believe Marca used the two inmates to kill Claudia then had them killed to cover up what they knew. So the team brought in a guard that had been on duty when Claudia died. They talked to Officer Mitchell and Mitchell who had been an MP had known exactly how to answer them. She told them that everyone in the encounter had been trained and she meant Claudia as well. Claudia had known something was going to happen because she had made a shiv beforehand and so Mitchell had already looked into her visitors by the time she spoke to NCIS.

Mitchell said that had been the first time anyone had visited Claudia and the rest they found out for themselves. They learned the man that went to see Claudia claimed his name was Son Goku when in actuality it was Oscar Mori. Mori was also Peruvian and he could have delivered a message for Marca. The team went looking for him and in the meantime, they thought it best to speak to a former agent that helped them on the case. Agent DeChamps had been with Secret Service back when they knew her and it turns out she left the Secret Service to join NCIS although the guys got into a few problems when they went to go speak to her. They saw her and had been close to approached her when a couple of gunmen opened fire.

The gunmen had planned on killing one agent and, in the face of three, they lost. The guys helped Agent DeChamps take out both men and they brought her back to the base because they thought the threat to her life wasn’t over. If Marca went after her, then he was going after everyone that ruined things for him in LA and so Mosley used that to continue looking into Marca. She had faced some opposition from the Secret Service and had told them that she had a part in everything because it was her team that could be in danger as well. So, Mosley, had her people move on Mori when they found him and they forced him to reveal what he was doing in LA. He had been sent by Marca and so it hadn’t taken him to tell them everything. He told him that he had to deliver a message to Claudia and that he hadn’t really understood it because it had been so vague.

The message had been “A supernova asked you a question”. The team hadn’t understood it either and so they asked about the other mission Mori had been sent on. He said that he had taken a delivery and had dropped it off at a warehouse, so Eric and Nell had found out what was happening. They found evidence that the package had been the chemical used in Japanese currency and figured
Marca was trying to counterfeit their money nowadays since he had such troubles with both the US dollar and the Euro. Kensi and Deeks had been asked to follow the money while the others were going to go talk to Marca lackey that was also in prison. Callen was supposed to go with Sam and DeChamps to the visit to the prison and he couldn’t because of this thing with Anna.

Anna had killed an unarmed adversary and could lose her job at ATF, however, Callen had been the first person at the scene and so ATF what to know what he saw. He talked to Anna and she told him just tell the truth. He had come in after she shot the guy and she hadn’t wanted Callen to risk his own principles by lying to cover for her. She said she wasn’t worth it. The two knew their relationship was over by that point and so she thought Callen would tell the truth except he wasn’t sure if he should. He had pushed his meeting with ATF because he friends had found out that Kensi and Deeks were walking right into a trap. They found out the ranch the two went to was where Marca housed his American tactical team.

The tactical team was all that was left of Marca’s operations in California because the man had been smart enough to move everything out of the state once NCIS nearly destroyed his business.

Only Marca hadn’t killed Claudia, it had actually been another crime family and they had wanted Marca so focused on what was happening in the States that he took his eye off the ball in Peru, so even after they dispense with the tactical unit, the team knew that they needed to keep an eye on Marca.