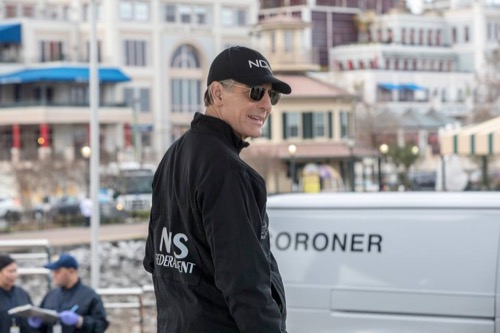 Tonight on CBS NCIS: New Orleans returns with an all-new Tuesday, March 13, 2018, season 4 episode 17 called, “Treasure Hunty,” and we have your NCIS: New Orleans recap below. On tonight’s NCIS: New Orleans episode as per the CBS synopsis, “During the annual Louisiana Pirate Festival, the NCIS team investigates the murder of a Navy captain who was searching for a valuable 200-year-old marble and gold fleur-de-lis.”

Things took a bad turn at the Contraband Days pirate festival on tonight’s all new episode of “NCIS: New Orleans” when two partygoers found a body.

The body as it turns out was Lt. Commander Elaine Dodd. Dodd was an oceanographer with the Navy and worked over at the Stennis Space Center mapping the ocean floor though she had taken leave from work recently because she claimed she wanted to visit her father and that had been a lie. Dodd had never left the city. She had continued to use her credit cards in town and so the team tried to figure out why she had stuck around. They tried to follow her movements which wasn’t much because all they had was the moments she had used her card and so they were hoping her father could help. The man had come to New Orleans because he hadn’t heard from his daughter in a while and was concerned.

Tom Dodd had even reported her as missing and so NCIS had wanted to break the news to him themselves. They had visited him and had brought him down to Wade’s lab so that he could identify his daughter’s body, but he had also stuck around when they had made a breakthrough. Sebastian had found something on the victim’s arm that her killers had tried to scrape away and he hadn’t known what it was while Dodd’s father had. The older man had recognized the symbols as coordinates and so he figured out what his daughter was doing when she was murdered. She was apparently looking for the Napoleon Fleur-De-Lis which was a treasure that was supposedly stolen by a known pirate Jean Lafitte.

Lafitte had stolen the treasure and had reportedly hidden it hundreds of years ago. Dodd’s father had tried to look for the treasure and had eventually given up when he couldn’t find any of the clues yet his daughter it seems had never given up on the hunt. She had continued to look for the treasure and had gotten a clue. Dodd then tattooed the coordinates to the first clue on her arm and so that explains why her killers must have tried to remove it. They must be looking for the treasure as well and so Sebastian used to the coordinates to figure out where the next clue was. It was actually at a church and, while the guys had been looking around, someone had started shooting at them. They of course had returned fire and the other guys later decide to flee the scene.

Pride and Sebastian however stuck around. They had wanted to know what the clue and eventually they found it. It was a puzzle book and so the agents realized that treasure hunt was real. There were people that were looking for Lafitte’s treasure and they were even willing to kill for it, so they ran ballistics on the crime scene at the church and they got a print recognition. It pointed to an ex-con named Nathan Hendrix. Hendrix had no connection whatsoever to Dodd and so again Dodd’s father had helped them. Tom Dodd had said that Hendrix used to work with a contact of his that also had tried looking for the treasure and so he set up a meet. Pride hadn’t wanted Tom to be there and had tried Tom out of meeting this person only Tom wouldn’t have it.

Tom said that his contacts wouldn’t meet with cops and so the team needed him. He had arranged the meeting and he hadn’t been wrong when he said his old friend didn’t like cops. The guy had gone to the bar and would have made a run for it when he saw the others, but he stayed because Tom needed his help and because he had information. He said Hendrix was working for someone else that was after the treasure and that this other crew was dangerous. They were so dangerous that the team was worried about Dodd’s source. Dodd had been in contact with a woman named Michelle Faucheux and she was the leading historian on Lafitte, so NCIS quickly moved to retrieve her before she was hurt and they tried looking for her at her at office. The office had been trashed and the agents didn’t know what became of Michelle until they heard someone in the closet.

Michelle told them that two guys had broken in and had thrown her in the closet though she claimed she overheard them trashing the place and so the agents brought her back to headquarters where she would be safe. However, Michelle had noticed the puzzle book and had geeked out over it with Sebastian. The two knew how puzzle books work, Sebastian had a crush, and so they agreed to work together. Together they figured out the clues to open the book and later on with Pride’s help they managed to figure out where the next clue was located. The next clue was at the cemetery where a friend of Lafitte was buried and so Michelle had gone with Sebastian and Gregorio to track down this clue. Meanwhile Percy and LaSalle was going to try and clone the phones of the guys that were following the other team.

Therefore, Percy and LaSalle figured out their friends where in trouble when they got a text message sent to Hendrix from Michelle. Michelle was apparently their employer and she had faked her place being trashed just to get close enough to the puzzle book. The puzzle book had led to once clue after another and so Michelle pretended to be helping them along because she had wanted to figure out where the treasure was before anyone else. That included NCIS and so LaSalle and Percy found their friends locked in a crypt. Michelle had tricked them into going inside and had locked the doors behind them, so Michelle had gotten away with the last clue and the team was forced to fall back on the cloned phones to find out where this other team were heading.

Michelle and her friend shad driven to some piece of deserted land and Pride was closer to them than the others, so he had chosen to follow them on his own. He just hadn’t known that Tom was following him and so they both ended up as hostages. Michelle’s hired guns had gotten the drop on them and had then made the guys dig up the treasure. And when they found it, the guys used that moment to get the drop on Michelle’s team and Tom had almost killed Michelle. Michelle had been defenseless and Tom had wanted to get revenge for what happened to his daughter yet Tom ultimately chose to listen to Pride and not hurt her. She wasn’t worth it and there was still a treasure to claim.

They had found the fleur in the treasure chest and Tom decided to give it back to its rightful owners which was the city of New Orleans.

Pride, for his part, had offered an armed escort so that they didn’t run into any problems on the drive to the Mayor’s office.