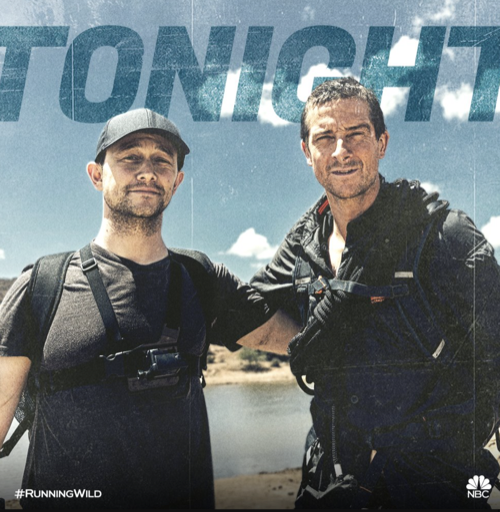 Tonight on NBC their new show Running With Bear Grylls airs with an all-new Monday, May 7, season 4 episode 1 called, “Joseph Gordon-Levitt” and we’ve got your Running Wild with Bear Grylls recap down below. On tonight’s episode as per the NBC synopsis, “In the Season 4 premiere, Joseph Gordon Levitt tackles Kenya’s unyielding terrain with Bear Grylls. Dropped into the elements from a helicopter, Joseph and Bear navigate a perilous rappel, milk a camel for needed hydration, and ascend a massive rock dome that tests Joseph’s fear of heights.”

The famous adventurer was back for an all-new season of “Running Wild Bear Grylls”. Bear Grylls was a man that’s been everywhere and has practically seen everything, however, the action man had invited Joseph Gordon-Levitt to go with him to Africa. The boys met in the Northern part of Kenya and had barely gotten the chance to shake hands before they threw themselves right into the wild. They rode more on than in a helicopter until they got to the designated spot that Bear said was “here” and was more like a river. They then jumped into that river and Bear closely monitored the scene until he safely got them to the shore.

Bear as it turns out hadn’t mentioned that the waters they were jumping into were crocodile infested until after they jumped into them and so he had to explain to Joseph how to get to the shore without riling the creatures below. Those crocks could easily have pulled them under or have taken a bite of them and luckily that hadn’t happened. Bear was able to keep Joseph calm and Joseph said that Bear was a very good teacher. He kindly explained things even as he told Joseph about the many dangerous things they were facing and that included what they faced next. The two men were hiking along when they came across what it looked like a camel, but it wasn’t a camel.

It was a creature called Dromedary. It was like a cousin of the typical camel and it could be milked. Bear taught Joseph that if he was ever threatened by those creatures that he should spit at them and Joseph hadn’t believed him. He thought Bear was making that part up until he witnessed Bear do it. Bear had gotten close to the creature and had milked it though not before he had to spit at it a couple of times to keep it calm. The dromedary was one of the few creatures that could kick out from the back and sides. Joseph had been apprehensive when it was his turn to milk it and so he should have spat at it like Bear said only he couldn’t.

He said he was a pacificism and so he tried to talk calmly to the animal instead. Joseph went towards it using gentle tones and had hoped for the best yet the animal had kicked him. It kicked him in the shins and thankfully the creature hadn’t been using her full strength, so he decided to leave the animal alone and had just taken a sip from Bear’s milk. The milk had been more salty than sweet and Bear had sort of left out the part how sometimes the mothers’ sweat that she develops on the nipple could go into the milk. That part he kept to himself and so the men continued on with their salty milk.

The men continued their hike until they came across elephant dung. Bear said that the dung made great kindling and so they collected it despite its smell. It smelled just like dung would and still they put in their backpacks. But they kept tramping through the heat until they scaled down a mountain and that’s what Joseph hadn’t the hardest time with. He knew if they didn’t spot each other properly that the rope could split one of them in half and so he had talked himself up into doing it. Then when he was ready, they got down the mountain and find new dangers to run into. They were hiking when they followed a sour smell to a carcass and Bear said that it looked like a predator was around.

Bear looked into the nearby vicinity when he a small pond and poked at it with a stick. He had a theory and that theory was proven true when a crocodile popped out of the water. The crock was fine with staying in its natural habitat and so the men went around it to get the carcass. The carcass was their dinner that night. They couldn’t eat any of the meat because maggots had grown all over it and so they cut out the animal tongue to eat. Bear had said that the tongue was relatively safe and that meant all they had to do to cook it was char it. They got the elephant dung out and started a fire by manipulating the sun with a piece of glass.

That had brought back some memories for the actor because he remembered setting leaves on fire with his older brother. His brother had passed away some time ago and normally Joseph didn’t like talking about him on tv though he made an exception tonight. He talked about his older brother that was a free spirit and how he just turned the same age that his brother died. It had clearly been hard for him to talk about grief and how he sometimes become sad when he realizes he forgot to think of his brother. And so the two men talked about that because Bear had also lost his father when he was very young and sharing their grief helped them live with it.

Their dinner, on the other hand, hadn’t been so bad. It had tasted a lot better than Joseph thought it would and so everything had turned out fine. They didn’t even have a problem with falling asleep in the soft drizzle and were sleeping when bear heard something. He later woke up Joseph to show him the leopards that were watching them. The animals weren’t moving in and it was more like they were sussing out the guys when the guys using the fire to scare them off. So besides that, they managed to make it through the night and had only one challenge left for them that next morning. They had to get back up the mountain.

It was just unfortunate that the sun came back out when they were making their climb. That made their steps feel heavier and made them move slower. Bear had made it up the mountain, okay, but Joseph had struggled and it wasn’t until they made it to the summit that he realize all that struggle had been worth it.

The actor, writer, and director had pushed himself and learned to ultimately enjoy the journey.