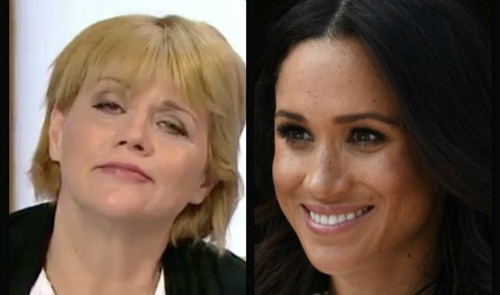 Samantha Markle has gone on the record once again to air out her family’s dirty laundry. This time around, she’s slamming Doria Ragland, who she says wasn’t around much during Meghan Markle’s childhood years. In fact, the Duchess of Sussex’s estranged sister suggested that one of the reasons why Meghan is so close with her mother these days is because she apparently ghosted her best friend of 30 years, Nikki Priddy.

Even though Samantha said that she wanted to make peace with the Duchess of Sussex during a televised interview in London this week, she’s still talking about Meghan and all of their family issues on social media. Samantha suggested that one of the reasons why Meghan and Doria is so close is because the former Hollywood actress has supposedly cut off contact with her best friend, Nikki Priddy.

Nikki was Meghan’s maid of honor during her first wedding to her ex Trevor Engelson. But soon after reports indicated that Meghan and Prince Harry were dating, Nikki opened up about their friendship to several tabloid magazines.

And now Meghan’s half-sister says that even though Doria seems like she’s always been close with Meghan, that wasn’t always the case. She says that it’s their father Thomas Markle who raised Meghan during her childhood years, and not Doria.

Samantha responded to a follower on her Twitter account by saying, “Glad you love people you don’t even know. But everything that you think you know from the tabloids is a lie. Dad pretty much raised her most of her life on his own and Doria was not around very much. Family issues like this exist because one member of the family ghosted both sides and her best friend of 30 years. If it was your family you would say something too.”

Even though Samantha has spent the last week in London, there has been no indication made that she will be getting an invitation to Buckingham Palace anytime soon. In fact, the Duchess of Sussex has ignored her altogether and has made no comments about any of the claims that she has made on social media or in her public interviews.

For her part, Meghan has managed to remain relatively quiet and distant from her half-sister and the rest of the Markle family for that matter.