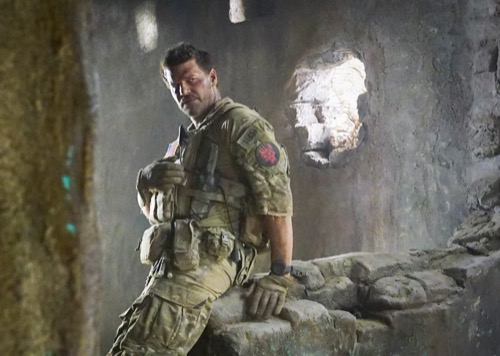 Tonight on CBS their new military drama Seal Team airs with an all-new Wednesday, May 9, 2018, episode and we have your Seal Team recap below.  On tonight’s Seal Team season 1 episode 21, “The Graveyard of Empires” as per the CBS synopsis, “Following a helicopter crash, the SEAL Team must proceed with the mission as hostiles bear down on them and an injured and impaired Jason goes after their target alone.”

One of the helicopters coming back from enemy territory was shot down on tonight’s all-new episode of “SEAL Team”.

The helicopter that went down happened to be the one carrying Jason as well as Nouri Halani. Halani dropped out of the chopper miles away from everyone else because he hadn’t been strapped in like they had, however, losing custody had been the easiest thing to accept about the situation. The Americans had all gotten banged up when they crashed and no one was more out of it than Jason. Jason had suffered a head wound that left him disorientated and so the kid had had to take command. Clay had done his best to move the men away from the crash site because that had left them too open and had tried firing back at the men that remained on their tail. They had crashed in a territory nicknamed Taliban country after all and the enemy just came coming.

They shot a young soldier who hadn’t gotten up in time and so Clay had had to carry two men back to the dugout. The building they found hadn’t been all that sturdy and that meant they hadn’t had great coverage, but they had tried to make what they had work until they were rescued and what they hadn’t known at the time was that it was nearly impossible to rescue them. The thing that took them out had been an old heat-seeking Russian missile and it could take out whatever rescue team they send in. Blackburn decided not to risk it! He refused to send in another chopper and the other team had left their chopper behind because they thought they could make to the farmhouse on foot. And so the situation was chaotic at best.

Blackburn tried to find another way to get Jason and his men out of there alive through the things at the crash site weren’t great and they kept getting worse. There were a lot of men heading towards the farmhouse and it couldn’t have been a coincidence. The men back at the base figured it was Nouri’s men that were coming after them and so they had the team that Ray was leading move a little faster. Ray had tried to do what he could and they picked up the pace, except they ran into a little problem. They passed two teenagers that looked like goat herders and so Sonny thought they should kill them. He said they were going to grow up to be the Taliban and that they might as well stop it now that they could.

It was Ray that hadn’t wanted to kill another kid. He thought they could just let them go and so he got into a fight with Sonny. The two were arguing while one of the teenagers made a run for it and Sonny had wanted to after him yet Ray let him go and so that kicked off another fight. Sonny accused Ray of still blaming himself for what happened to the kid he accidentally killed and Ray said that Sonny was being too emotional because he wanted revenge. Both men called into question the other’s actions and they would have kept on fighting if the base hadn’t told them that they were close to the farmhouse. The men remembered their priorities and so they pushed themselves until they reached the other team.

The other team had been growing concerned and so they had been happy for the backup, but pretty much everyone had been concerned about Jason. Jason had suffered a concussion and he wasn’t making much sense. He hadn’t wanted to focus on taking out the missile site because he instead wanted to go after Nouri Halani. Jason kept telling everyone that Nouri identified the man behind Xeon Tactical and that he could tell them that Alan Cutter was responsible for what happened to ECHO Team. Jason’s timing on the matter left a lot to be desired and unfortunately, no one took him seriously because of the concussion. They all kept trying to tell Jason that he wasn’t at his best and that Nori never said Alan’s name because that had been Jason.

All of which was true! Jason’s concussion left him unable to string a full sentence together and Nouri hadn’t mentioned Alan’s name. He had just said the Englishmen and that could mean anything. Nouri could have seen Alan on tv and so the team thought it best to ignore Jason. They had gotten a read on where the missile was located and had gone there to take out the supply. Only when they returned, they found Jason gone. He had snuck out to go look for Nouri and had found him. Nouri had been dying at the time and he had nothing to lose. He told Jason that the men out there weren’t his, they were his brother’s who had wanted to ensure he died before he could tell anyone about how smart his brother was.

Nouri said it had been Abad that planned everything. He met with Alan about those same raw materials that Jason had been so concerned about and together they found a way to lessen the land’s value. They had those fields burned and the land was sold to the Halanis cheaply, however, Abad it seems hadn’t wanted to share with his brother and so he planned to take out Nouri. Nouri had said that it had all been his brother before he died and therefore Jason thought he finally had the evidence he needed when he returned to the farmhouse, only he had been wrong. Jason had thought the others were overreacting to him being out of it until they had said they were leaving right away and he told them not to forget Dave.

Dave had been the man that had been talking to Jason before he left the house and it turns out he had been dead before they had even entered the house, so Jason imagined a conversation between himself and a dead man. He realized he did have a bad concussion and so he doubted everything he had heard that day which included his conversation with Nouri. Jason stopped talking about everything that happened when he made that realization and he had been quiet the whole way back to base.