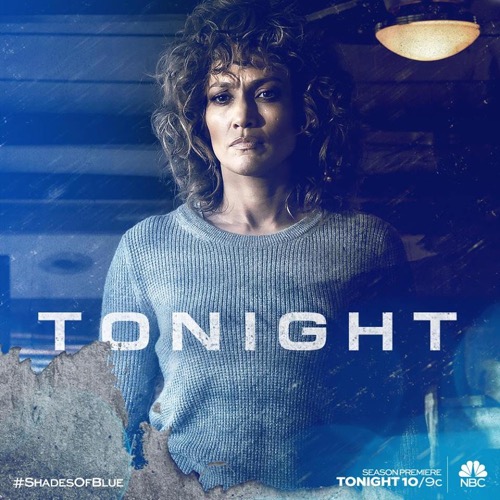 Shades of Blue airs on NBC tonight with an all new Sunday, June 17, season 3 episode 1 called, “Good Police,” and we have your weekly Shades Of Blue recap below. On tonight’s Shades of Blue season 2 episode 13 as per the ABC synopsis, “The Season 3 premiere: Harlee and Wozniak, still dealing with the fallout from their near-death experiences, discover a grisly crime scene riddled with mystery.”

Santos is testifying in a criminal corruption case against the NYPD. Santos tells them she is here to tell them everything. They question her stability given all that she has been through. She makes it clear to them that she is not crazy and can supply them with some shocking information. She informs them that sometimes she is an officer and sometimes she too is a criminal. It depends on the day. The courtroom breaks out in murmurs.

Santos shows up at Sunny’s Bar. They are closed. She tells him she isn’t there for a drink. Wozniak and Loman wait outside as she tries to buy fentanyl from him. She cannot get him to budge. She heads out and tells the others.

Wozniak wants to go back in and force him, but Santos wants to do things the right way and get a warrant. They hear gunshots. A short distance away, the head into a diner where they see a female dead on the floor.

With guns raised their walk through the place. Outside, Loman sees a man running. He follows him. Back inside, Wozniak finds more dead on the floor. Someone comes running in. He announces himself to be an officer. He recognizes one of the men on the floor as his partner. They were working undercover.

A suspect runs by Santos. She chases the person. She closes in on him. She shoots him in the chest. She starts shaking. Loam comes up. He tells her what she is going to say.

Santos sits in the bathroom and listens to the 911 call of when she made it out of Stahl’s house. She was bleeding on the lawn. Her boyfriend comes in. He tells her she was supposed to erase that recording. They talk about Stahl. He has been on the run for 4 months. She blurts out that she killed a man tonight.

The next day, Santos walks through the crime scene at the diner. The cop who lost his partner shows up. Santos talks through what she thinks happened.

Santos meets with a woman who used to role play for Stahl. He would pretend she was Santos.

Wozniak heads to the local juvenile detention center to sit and play chess with the young kid who shot him. He reminds him that it wasn’t his fault, but Quince’s.

Santos and Wozniak meet at a funeral. They talk after. She is angry for shooting the only possible witness of a cop’s murder. He tells her to take some time.

Loman and Santos see the dead cop’s partner talking and arguing with a man at the funeral that Loman swears was there that night. Loman and Santos sit in the car. They look him up online. Loman thinks they should contact internal affairs. Santos doesn’t think they should. She gets out of the car and talks to the officer who lost his partner. Her questions about why he was there that night make him nervous.

Nazario attempts to beat answers out of the bartender from the other night while Wozniak sits outside.

Loman and Santos track down a man named Orlando from the other night. He tries to run but they catch him. As they are putting him in the cruiser, the officer arguing with the one who lost his partner arrives. He wants to take the suspect, but Loman and Santos assure him they are in charge. They leave. He isn’t happy.

Wozniak gets a call regarding Quine’s whereabouts. They head into the apartment. Ramsay is in there. He’s rummaging through the fridge. Wozniak asks where Quince is. He makes some small talk and then says he needs a favor.

Wozniak goes back to the precinct and tells Santos he needs her to bring Orlando to Ramsay later that night in exchange for Quince. She is reluctant but Wozniak tells her she has no chance.

Later that night, Santos decides not to make the drop after Orlando reminds her that she said she would help him. She is supposed to be a good cop.

Santos goes to see Wozniak. He is upset. He tells her that when he was on that lobby floor and he thought he was going to die it was a lonely feeling. He wants to do things different to start over. She tells him he needs to start over the right way, to be better. He doesn’t want that. He wants things to go back to the way they used to be. She tells him she wants to be cut loose. She will stand alone.

Santos heads to meet Nava and Orlando. She gets side tracked when she thinks she sees Stahl. By the time she makes it to them the police are there. Nava and Orlando are both dead, bleeding out on the ground.