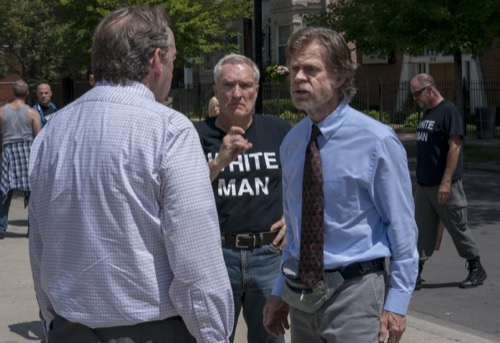 Tonight on Showtime the uniquely twisted and highly entertaining show Shameless returns with an all-new Sunday, September 30, season 1 episode 4 called, “Do Right, Vote White!,” and we have your weekly Shameless recap below. On tonight’s Shameless episode, as per the Showtime synopsis, “Election day puts Frank and Fiona in a head to head battle as they each try to round up votes for their candidates.

Lip has to make an important choice about Xan’s future. Debbie gets in over her head with Alex. Carl’s killer instinct is put to the test. With his trial looming, Ian struggles to decide how to plead. 100th episode!”

Tonight’s Shameless season 9 episode 4 is going to be great, and you won’t want to miss it. So be sure to bookmark this page and tune in for our coverage of Shameless tonight between 9 PM – 10 PM ET! While you wait for our recap, make sure to check out all our Shameless spoilers, recap, news & more, right here!

Its morning ad Xan asks Lip if she can be homeschooled. Frank walks in the kitchen and tells Carl and Lip that military school is for assholes. Frank goes on to talk about Moe and election day being around the corner. Ian tells Frank not to wear his shirt outside, it reads, “White is Right.” Debbie didn’t come home last night, Lip asks Ian to keep an eye on Franny.

Debbie wakes up in her co-worker’s bed. Fiona tells Ford that she can’t believe that Frank is supporting Mo White. Carl is still feeding the old sick dogs, Ian tells him that he should just get rid of them and if can’t, he should just think about maybe teaching kindergarten instead.

At the Alibi, Kev put up a sign that reads, “Vagina Safe Zone,” V thinks it may just be a little bit much. Kev thinks it will defuse the whole “rappiest” thing.

Frank runs into Mo, he sitting on a step. Mo says that he is running at 6% and looks defeated.

Debbie and her new friend, Alexandra, are enjoying breakfast together when she is asked to move in.

Liam is at school with his new bodyguard, in class, he slips his test answers over to pay him back for his services of taking care of him.

Fiona arrives at Patsies and sees a Mo White poster on the window, she takes it down, apparently, Frank came by and put it up. Fiona replaces the poster with an Isaac Ruiz one.

Debbie arrives home and tells Carol she is in love with Alexandra, he asks her if she is a lesbian, she says yes and they are moving in together. Someone is at the door, Carl answer the door and a guy hits him in the face, he tells him that he stole his recommendation from West Point and now he has to enlist in the Marines. The guy challenges Carl to a duel, the person that wins, gets the recommendation.

V and Kev are at the bar, the guys are talking about rape. Kevin reminds them that they need clear verbal consent. Beth Watson arrives at the bar, Kev can’t wait to speak to her.

Lip is at work when he has a visitor, it is Xan’s mother and she wants her back. Lip asks where she lives, she won’t tell him and he won’t give up Xan. Lip gets into an argument, they shout and then she leaves. Xan finishes school and meets Lip at the garage. Brad tells Lip he should call DCFS.

Debbie goes shopping, she changes her look to a more masculine.

Frank is collecting money for the campaign sees Mo speaking to young girls, Frank puts a stop to it and tells the girls to go.

At school, Liam’s teachers want to move him up from grade 3 to 6 because he has been doing so well.
The Alibi is off the rapiest bar list and both Kev and V are thrilled.

Ian is walking down the street and a guy stops by him in a van, asks if he is the Ian from Hey Jesus. When Ian says yes, the an opens up and a bunch of guys come running after him. Ian runs like crazy and manages to get away. Lip sees Xan’s mother, she is turning tricks on a corner.

Carl goes over to a neighbors house to help him get his mojo back.

Frank and Mo are campaigning and getting lots of doors slammed in their faces.

Since campaigning is not going well, Frank suggests they go to a bar. Mo tells him that he wasn’t expecting to win anyway.

Fiona is on the street handing out flyers for Ruiz, she is voting for Ruiz because she doesn’t like the rent control, she thinks the city shouldn’t be able to tell her what she can charge.

Liam is putting Xan to bed, he sits on the edge of her bed and asks her if she wants to stay with him if her mom doesn’t come back, she says yes that would be good. Lip heads into the kitchn and ian tells him he pulled a hamstring running from homophobes. Ian asks Lip if he thought he could do time, Lip says no. Ian goes on the say that the gay Jesus kids don’t want him to cop a plea, they want him to go to trial. Lip asks what his lawyer said, he could get 10 to 15 if he doesn’t take a deal. Lip tells Ian about Xan’s mom showing up, she is a junkie and he doesn’t know what to do.

Frank goes to see Malcovitch, asks if he wants to help him with something. They arrive at the polling station with a van full of men who are there to intimidate people from going in to vote.

Its voting day, Frank is dressed up and ready for the day. Fiona wakes up and Ford is up early, he went to vote.

Debbie just woke up and Alexandra is all dressed for work and leaves with barely uttering two words to her.

Carl loads his gun, his weapon of choice for his duel.

Ian goes to Gay Jesus headquarters, he tells the leader that its 2000 years since Jesus Christ died on the cross and he runs down an alley running for his life because he loves men more than women.

Fiona goes to see Kev and V, she tells them that she is not so sure she is doing the right thing by voting for Ruiz. Fiona arrives at the polling station, sees all the men and asks Frank what is going on. All of a sudden some black cars show up, women get out and start fighting with the men. Fiona takes a hit at one when Frank tries to crawl his way out but one woman catches him and hits him.

Debbie is in Alezandra’s apartment, she says she can’t do this again, fall in love with a straight girl. Debbie says she is gay. Alexandra asks her to leave.

Carl arrives for his duel, he tells the guy to choose one of the guns he brings in a bag. They turn back to back, they have to walk 20 paces and they shoot. The two walk and then turn, the guy shoots himself in the leg, he tells Carl he doesn’t want to go to West Point, its his dad that wants him to go. The guy begs Carl to shoot him. Carl shoots him in the other leg, the guy thanks him.

Fiona tells Ford that she didn’t vote for Ruz. Debbie arrives home with Fanny and tells Lip that she broke up with Alexandra.

In a surprising twist, Mo White wins the election and Hugs Frank. Supporters are shocked and already demanding a recount.

Lip heads back to see Xan’s mother, he tells her that he will give he ten thousand if she agrees to stay away from Xan, but she will have to sign papers relinquishing her parental rights. All of a sudden, Xan arrives, she followed Lip – she runs into her mother’s arms. Lip throws the papers on the ground and walks away.