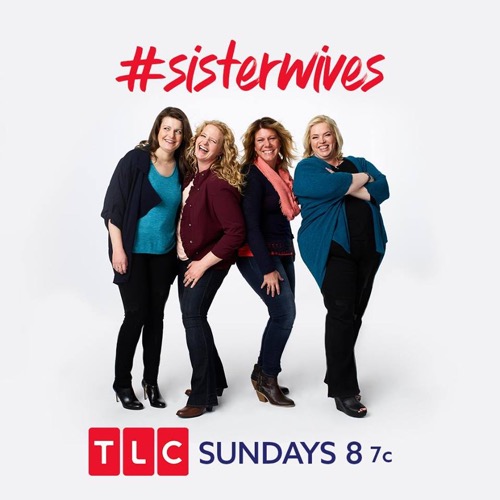 Mykelti and Toni were finally married on tonight’s all-new episode of “Sister Wives” however there was naturally a bit of chaos on the big day.

The day began with some of the family heading over to the Country Club early in morning to get everything set up. Mykelti had been very clear about what she wanted at the wedding and had fortunately limited the amount group that would help her to just the people she knew she could order around. Therefore, Mykelti didn’t ask her dad and she didn’t ask Toni. Toni was a pretty chill person and so he wouldn’t have been the person to understand why Mykelti was freaking out because he didn’t believe there was a reason to freak out. He had been asked if he was nervous and said of course not because he was marrying Mykelti. And it was the way he said it that made everyone feel comfortable about Toni and Mykelti getting married.

The two hadn’t been dating all that long when they got engaged and even after they got engaged they had sort of wanted to race to the altar but had thankfully been talked out of that idea until the two could get to know each other better and the family could find out more about Toni. Toni was the guy that nicknamed his friends “the brosmen”, had an opinion on almost everything, and who undoubtedly loved Mykelti. Mykelti, on the other hand, was the former wild child of the family and so Christine had been worried when her daughter suddenly wanted to marry her boyfriend of barely a summer. And so looking back at where it all started, the family would still stick with their original decision on postponing the wedding even if they wish they had changed their methods.

The parents had all been quite vocal with how they felt about Mykelti getting married so soon to her new boyfriend and Janelle for one hadn’t been happy that Mykelti wanted a wedding so close to Maddison’s. Maddison or Maddie as everyone calls her was Janelle’s daughter and she had wanted her daughter to have her moment to shine because no one should have been thinking about her sister’s wedding when hers wasn’t over yet. So everyone understood that and they postpone Mykelti’s wedding to the end of that year only no one could have foreseen the drastic weather change that the couple ended up having to face on their wedding. They lived in Las Vegas and hadn’t seen ice on the ground until the wedding day.

It had been freezing outside and to make things worse there had also been a problem with the wind. It was a windy day and it ruined an outdoor wedding. The couple hadn’t created any contingency plans in the event of the weather turning against them and so there were no options on possibly moving wedding indoors. They just had to deal with it and so they tried creating plans to keep everyone warm. The bridesmaids all had shawls that they had to wear low when they walked down the aisle and therefore they were allowed to pull it up to keep themselves during the ceremony, but there was some concern for Maddie who was pregnant because no one wanted her to catch a cold in case it risked her immune system.

Mykelti though had also been concerned about Maddie and so she tried to come up with additional plans to keep her sister safe as well as comfortable. She had slippers on standby for her sister, the event coordinator had heat lamps ready to go, and the couple did their best to push through the wedding pictures as quickly as possible. But the ceremony itself had gotten held up because Kody didn’t have his shirts. He had had to leave the hotel early to finish setting things up at the venue and so he had asked Christine to bring his shirts for him except she forgot. In her rush, she left the shirts and so Kody had had to leave the venue to go collect his shirts. And by then there had apparently been some traffic.

Kody had ended up running late in returning to the venue and so that delayed the ceremony because Mykelti needed her dad to walk her down the aisle with her mom who somehow made things. Christine wouldn’t even go downstairs to wait with the rest of the wedding party because she had wanted to wait for Kody upstairs and so that left Mykelti freaking out. She had wanted to see everyone before they walked out together and the longer she didn’t see either of her parents – the more she freaked out. Mykelti was already nervous about Toni’s family that had also been running late and so seeing her own family all there would have calmed her down some. Especially as the time for when the ceremony was supposed to be begin had come and gone without an actual ceremony.

The ceremony was supposed to begin at three and it actually began a few minutes after three because by then everyone had shown up. Toni’s family had gotten a ride to the venue and Kody eventually returned fully clothed. So the wedding went ahead mostly to schedule and the only ones that hadn’t been affected by the cold had been Toni. Toni and Mykelti literally only had eyes for each other yet he had to give her his coat in the middle of the ceremony because he saw how cold she was and so that was merely one part of the ceremony that it made really sweet. Their wedding officiant had also done a great job because he made things light and fun like the couple asked. He brought frisbees and somehow managed to turn it into a metaphor for marriage. And so their bilingual ceremony was everything they could have asked for.

Also, the incorporation of the frisbees was a nice Segway into Christine’s surprise for the couple. Christine had decorated dozens of frisbees with the kids and they were going to throw that instead of rice as a nice tribute to the couple. So the couple didn’t find out about it until after they were pronounced man and wife and were heading indoors. That’s when hundreds of frisbees went flying and it called to mind when Mykelti and Toni met over a game of frisbee, but things took a downturn when the couple was ready to go back outside with pictures with the family and Kody refused to cooperate. He stated that the bride’s executive decision was not a good one because he couldn’t risk getting any of his kids sick and that went double for the two youngest.

Both Solomon and Ari had colds and Ari had been coughing persistently throughout the ceremony so Kody couldn’t refuse to expose to the elements. It was just too cold outside and he didn’t want anyone from youngest to his coldest getting sick because that’s what Mykelti wanted. Therefore, a compromise was reached. There were a couple of photos outside while the majority of family photos was conducted inside and so one challenge while another eventually arose. The reception had been carefully planned out and so it was surprising when some people they hadn’t been expecting had also decided to show up. It led to the reception being packed wall to wall and they ultimately ran out of seats to offer people.

The whole night almost proved to be Toni’s worst nightmare because he had talked to the event coordinator beforehand about whether or not there was going to be enough food and it was by sheer luck they didn’t run out. His nerves had apparently pushed everyone into making sure there was enough food and so the seating thing remained the only problem, however, the night still had one more surprise. Christine had wanted to sing a song that her grandfather would always sing to her grandmother as a way to make up for not being excited when Mykelti said she first wanted to get married. She had thought her daughter was too young and the fact she hadn’t jumped up and down had hurt Mykelti.

Mykelti had thought her mother would be more supportive than that and so Christine decided to sing at the wedding to show Mykelti that she did believe in them as a couple yet the fact she chose to do it through song showed she wasn’t afraid of embarrassing herself as long it made Mykelti happy. Her daughter always loved to hear Christine sing because she remembered her mother singing to her growing up and so she had loved Christine’s second surprise. She had been moved by it and everyone thought Christine was incredibly brave. She, on the other hand, had hated her voice and had quickly explained afterward that she hadn’t practiced it to be that slow until just before the wedding.

Christine had originally sung it in practice to be a little bit faster than her final version and so she hadn’t been telling tales as a way to cover herself. She had hated her rendition even as the rest of the family said they loved it and so she had been quick to move on to the next stage. That being cake. The couple had agreed in advance not to smash cake into each other faces and so their cake tasting had gone according to plan so the next part had been the dancing. Everyone believed Tony and Mykelti danced very well together though Tony had a tendency to over twirl his new wife to the point they both looked like they were going to crash into something and so besides that the rest of the wedding went off without a hitch.

The parents hadn’t been onboard with the piñata in the beginning and somehow the piñata of the couple that the other was supposed to beat had won them over.

In fact, they thought it was therapeutic!