BY Kristine Francis on September 10, 2018 | Comments: Leave Comments
Related : Reality TV, Recap, So You Think You Can Dance, Television, TV 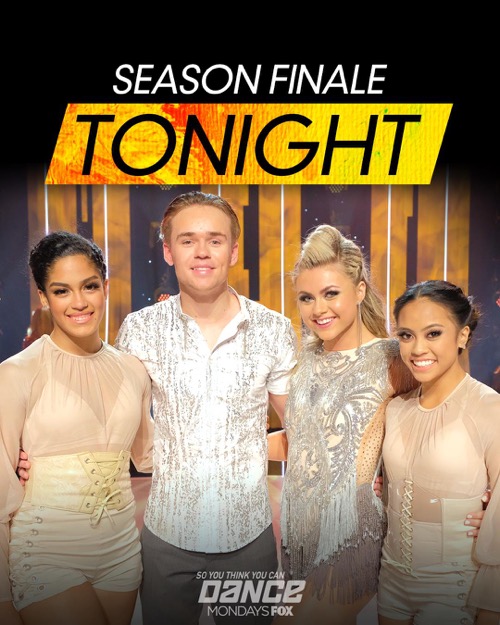 Tonight on FOX their Emmy-Award Winning So You Think You Can Dance premieres with an all-new Monday, September 10, 2018, season 15 episode 14 finale episode and we have your SYTYCD recap below!  On tonight’s So You Think You Can Dance season 15 episode 12 as per the FOX synopsis, “In the Season 15 finale, the final four dancers show the judges and the country what they’ve got one last time before the winner is crowned.”

It all came to a head on tonight’s season finale of “So You Think You Can Dance”. There are four remaining contestants at the start of the episode and the fact that they had made it this far was an accomplishment in itself. It had taken a lot for them to make it past the Academy Week much survive less the live shows and so the audience hadn’t been the only ones excited about tonight. The judges had also been enthusiastic about the dancers. These contestants were chosen from some of the most gifted dancers in the country and they even got to show some of that off. The judges had all been given the chance to pick one of their favorite routines this season and see that dance come back to life tonight. And so the first person to kick that off was Vanessa Hudgens.

Vanessa had started the night with an upbeat number and so she chose the Tahitian number performed by Jensen and Jay Jay. The two still danced quite beautifully together. They just had an easygoing chemistry and the audience watching this number again. It had been a great pick for Vanessa, but after each pick, the contestants got their chance to shine in their own way. The first up was Genessy. Not everyone had been a big fan of hers when she was first trying out and she had won them over because the judges had wanted to see how much she could grow onstage. So Genessy took that chance and went on to prove that she did belong in this competition. The first dance she picked for herself was the Contemporary number with Lex.

This dance was the first time that Genessy felt it all just click for her and so she wanted to relive that moment onstage. It was beautiful the first time around and it was still great because of this dance, this routine, and this partner had been great for Genessy. After Genessy’s dance, it was back to the judges’ pick. The judge this time around was Mary Murphy. She had purposely been saving her voice till that very moment and so she had been super excited to announce that she wanted to see Hannahlei and Cole dance their Paso Doble one more time. She said it had been one of the sexiest dances she had ever seen and was practically on her feet as they danced it again just for her. Mary had been so happy that her infectious joy carried them all along to the next performance.

Slavic was the last man was standing in the competition and he’s had many great performances onstage yet the one that sticks with him the most was the first Hip Hop number he had with Genessy. It had been special to him because he had enjoyed it and had loved the way how the crowd had reacted to watching it, so that’s the dance he wanted to relive. It had been just as fun as the first time and it had been nostalgic for everyone to watch. Only the next performance went back to the judges’ pick. The judge up for this one was Nigel Lythgoe. He had picked a number that the audience never got the chance to see. Nygel, as it happens, had had this big idea to use Evan in a tap number and unfortunately, Evan was eliminated before he ever got the chance.

Well, Nygel hadn’t thought that was unfair because no one had seen Evan in his true element and so he brought Evan back to dance a number with last season’s winner Lex. This was a brand new number, however, the audience quickly took it and Nygel turned out to be right because it had been a dance everyone had almost been cheated out of. The next dance had gone back to the contestants. Jensen had been up and she wanted to perform an encore of her Hip Hop number with Jay Jay. The two always ended up having fun together and it was the same for them for their second performance. They went out and had fun. They also surprised everyone by using Mandy Moore’s latest Emmy as their prop for this dance. And that’s something no one saw coming.

The next dance had been a judges’ pick. Stephen “tWitch” Boss had fallen in love with this one dance he couldn’t wait to see again and so his pick was Magda and Darius dancing a Smooth Jazz number. It had been so smooth that tWitch loved it and so too did the audience. It was great seeing Magda and Darius again and before they left the audience was reminded that they would be seeing everyone again when the show goes on tour afterward. Now, the next dance was Hannahlei’s pick. She has had plenty of memorable dances and the one that stuck with her the most was her dance with Marco. It had been a Contemporary piece and it had been sweet to watch. And so after Hannahlei was able to enlist such an emotion out of everyone, the show took a look back.

The judges even got the second pick. The judges all got to pick another dance they wanted an encore of and tWitch had been first. The second dance he wanted to see was Genessy and Slavic’s “House Work”. The Jazz number had been special for tWitch because he came from a Hip Hop background like Slavic and to see Slavic embrace new styles had been a proud moment for tWitch. He sees his younger self in Slavic and that’s why he had some advice after the dance. He told Slavic that he should be focusing on his classes and making contacts when the show goes on tour because he wanted to see Slavic succeed long after the show. Meanwhile, everyone else reminded Slavic that he shouldn’t forget to rest and that they could be his chance to make his move on a certain someone.

The next performance was Jensen, Genessy, and Hannahlei. They did that futuristic alien dance and the ladies had fun dancing together again though that wouldn’t be their last dance together. Later on, Vanessa had her second pick and it was another all-girl dance. She picked Jensen and Hannahlei’s routine that they performed in heels and it had been inspiring to watch. So much so that both Vanessa and host Cat Deeley decided to do the routine again at the afterparty. They had even decided who would wear what outfit afterward and so this female orientated dance stuck with the both of them. The next performance, however, had been the guys’ turn. The top four guys had danced to “Juice” again and both tWitch and Nigel had joined them up onstage.

Then it was back to Mary’s pick. She chose a routine she says will always be in her Top Ten. It was Magda and Darius and their Glass Heart Concerto routine. It was a beautiful and slow piece that everyone couldn’t help but love. The audience had enjoyed seeing the duet again and they also enjoyed Nigel’s pick. Nigel went last and he brought back Jay Jay’s Jazz routine with Lauren. Nigel has always loved jazz and he believed it deserved more recognition, so he was happy to see that routine again because he was hoping to see more of it in the future. But after the wonderful jazz number, the elimination finally began. The first person to get cut was Slavic. He came in fourth and had accepted the matter quite gracefully because he knew there was life as a dancer after the show.

And while there were other memorable performances like Darius and Taylor’s “It Takes a Lot to Know a Man”, all everyone wanted to know was who was next. Who was going to be eliminated next? The results eventually came in and Genessy came in third. Her journey on the show had been an unexpected one and it had been upsetting that she hadn’t won yet coming third was no small feat. She was a great dancer and she proved that to the judges as well as to her mother who had wanted her to go to school. So here’s hoping she continues on the path that she wants!

Then it came time to announce the winner.

The winner of Season 15 of “So You Think You Can Dance” is Hannahlei Cabanilla with Jensen Arnold coming in second!