BY Heather Hughes on September 6, 2018 | Comments: Leave Comments
Related : Days of Our Lives, General Hospital, Hot News, Soap Opera, Spoiler, Television, The Bold and the Beautiful, The Young and the Restless 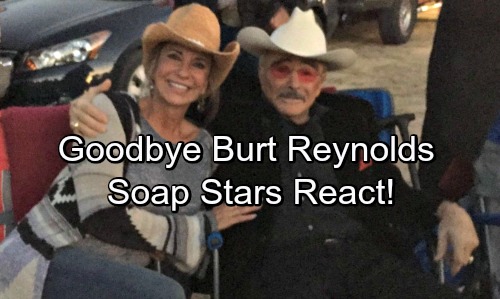 The soap world’s reacting to the loss of a legendary actor. Burt Reynolds has died at the age of 82. He passed away on Thursday, September 6, after suffering cardiopulmonary arrest and it didn’t take long for word to spread. Social media’s been buzzing thanks to posts from Reynolds fans, which include many popular soap stars.

The Young and the Restless’ Jess Walton (Jill) chimed in with her thoughts. She gushed over how glad she is to have met Reynolds. Walton tweeted, “What a thrill it was to meet this funny smart courageous man! The very definition of a movie star!”

On Instagram, another Y&R star offered a few words about Reynolds’ passing. Catherine Bach (Anita) said, “Rest In Peace to our beloved bandit…we love you Burt Reynolds!” She also encouraged fans to share their favorite “Burt moment” in the comments section. It’s clear that everyone wants to celebrate this beloved actor’s life.

David Hasselhoff, who played Dr. William “Snapper” Foster on Y&R, had this to say: “Burt Reynolds was the best, funniest super hero on this planet…He was a friend and I’ll miss him!! Nobody was better than him…dashing, charming and just so lovable!!” It’s comforting to know how much the people in Reynolds’ life cared about him.

General Hospital stars haven’t been silent either. Michelle Stafford (Nina) seemed especially broken up about Reynolds’ death. She exclaimed, “Burt!!!!!” Stafford added plenty of crying emojis, so she must be a big fan of Reynolds’ work over the years. She definitely knows how other Reynolds supporters are feeling right now.

Greg Vaughan, a former General Hospital (“Lucky”) star and current Days of Our Lives (Eric) hunk, spoke out as well. “Truly one of my favorite actors of all time,” Vaughan said. He included a classic picture of Reynolds and added “#legend” to finish off his Instagram post.

Scott Reeves is an alum of Days of Our Lives (Jake Hogansen), The Young and the Restless (Ryan McNeil) and General Hospital (Steve Webber). He put up a photo on his Instagram account, too. His caption read, “RIP Bandit.” A simple and fitting tribute!

Brian Gaskill played Oscar “Ozzy” Marone on The Bold and the Beautiful. He’s also an alum of All My Children (Bobby Warner), As the World Turns (B.J. Green) and Guiding Light (Dylan Lewis). His Instagram page featured a pic of the White Lightning poster. Gaskill said, “I love this movie so much….Burt Reynolds was the king in the 70s …”

It’s great that so many soap stars are taking the time to reflect on Reynolds’ passing and appreciate what he did for the entertainment industry. Reynolds’ work will live on, but fans from all over the world will miss him. Don’t forget to check CDL often for the latest spoilers, updates, and news.

What a thrill it was to meet this funny smart courageous man! The very definition of a movie star! pic.twitter.com/WMIrhLzNcX