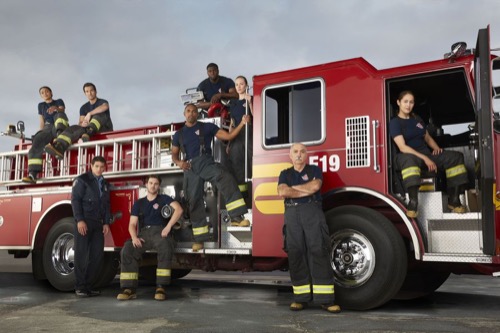 Tonight on ABC Station 19 returns with an all new Thursday, October 4, 2018, season 2 episode 1 premiere called, “No Recovery” and we have your Station 19 weekly recap below. On tonight’s Station 19 season 2 episode 1 as per the ABC synopsis, “The Season 2 premiere: Lives hang in the balance as members of Station 19 fight a raging inferno inside a skyscraper. Meanwhile, Pruitt’s health is in grave danger at Grey Sloan; and a seasoned firefighter with a mysterious past arrives at Station 19, leaving everyone to wonder what the future hold.”

Tonight’s Station 19 season 2 episode 1 looks like it is going to be great and you won’t want to miss it.   While you’re waiting for our recap make sure to check out all our TV recaps, news, spoilers & more, right here!

The firefighters were in the middle of a full evacuation protocol from the skyscraper when an explosion shook the building on tonight’s season premiere of “Station 19”.

The explosion indicated that staying in the building would be dangerous for them however Andy hadn’t cared about her own safety when she chose to go upstairs rather than down. It seems she had been waiting on Jack and she wasn’t going to leave the building without him. He had said that he would try to safeguard the building and so Andy was hoping to find him still alive and well. Only it hadn’t been her job to go back for Jack. She had been ordered by her commanding officer to evacuate the building and she chose to disregard that order because it had been Jack. The same Jack that she secretly had feelings for and so that why she hadn’t wanted to give up on him. And where she went, her best friend Maya followed.

Maya remembered what it was like when they were both going through training. They had been the only women there and had had to fight every ounce of respect they received, so Maya wasn’t going to allow her best friend to go into danger alone. She followed Maya up the stairs and left Vic to go downstairs alone, but along the way Vic came across Montgomery. Montgomery had chosen to save a civilian over himself and had therefore been abandoned on the stairs. He thought he was going to die there until Vic came and she refused to leave him. She began dragging him down the stairs to safety and at one point that staircase meant the world to their station. Ben had been a few flights below dragging a civilian to safety and he had passed Miller.

Miller was looking for Jack and he ended up finding out for himself that his whole team had been left inside the building. He even ran into Vic and he had tried to leave her too though she wasn’t having it. She demanded that he help her carry out Montgomery and he did except Vic doubted whether that would be enough and so she lashed out. She confronted Fire Chief Ripley once they finally got out of that building and she got in his face because she said he hadn’t cared about the firemen that had been left behind. Vic could have gotten into serious trouble for her actions and luckily Ripley hadn’t been in the mood to officially reprimand her. He said that he had to worry about the big picture and that she was only going the one chance to get away with her crap.

Ripley hadn’t gone after Vic because he could see that she was hurting and so the only one that refused to acknowledged that was her. Vic chose to be angry because it easier and she was angry at everyone. She was angry at Ben when she saw how he had made it out of the building by choosing to save Molly’s life. Molly had suffered a collapsed lung and could still die for all that Ben tried to treat her yet that hadn’t mattered to Vic. She turned away when Ben noticed her and tried to talk. She hadn’t cared about what Ben or what he wanted to say and instead she chose to go with Montgomery. Montgomery had a huge gash in his chest and had needed surgery and so Vic stayed with him as long as she was allowed.

Vic eventually had to leave his side and so that’s when she decided to have a word with Ben. Ben had been in the middle of telling reassuring Grant of all people when Vic returned and she let Ben have it. She hadn’t cared if Montgomery asked Ben to save Molly over him – she said Ben left her friend to die and so not only was she disgusted with him but so was Grant. Grant had believed that Montgomery would be safe because he always said they worked in pairs and the fact that hadn’t worked out in the end for him had made him take a walk. No one had wanted to be around Ben and there was nothing he could say that could fix things. He couldn’t even look at Molly’s mother afterwards.

Meanwhile, back at the building, Andy and Maya tracked down Jack and they rescued him from underneath a pile of rubble. They had worked together to save his life and ultimately everyone on their team had made it out of the inferno. They had thought it was a miracle and had started to celebrate a little too soon. It had taken a while before anyone noticed that someone was trying to reach Andy on her cell and so she found out about her father from tens of messages left on her cell. She had rushed to the hospital and there she found out what happened to everyone else. It turns out that the young girl that Ben had saved had ended up dying on the operating table and Montgomery was also at risk of dying on the table because of his injury to his chest.

Ben had gotten so upset with himself that he left waiting room and he ignored Vic. Vic came around in the end and she had wanted to apologize however Ben was now in the position of not wanting to hear it. He had needed time to vent and it was only as he was calming down that he was willing to talk to anyone much less Vic. Vic apologized for the things she said. She knows that Montgomery wasn’t just her friend and that he was Ben’s as well and so two forgave each other when the dust had cleared. They were even back to normal when Montgomery fully recovered! But things hadn’t been the same for Andy and Ryan. Ryan had lied to Andy about her father and she had snapped at him because him lying to her had been a pattern she was willing to break. And so he agreed that there were a few things that should change between them.

In time, Andy had regained everything else but her old relationship with Ryan and to make things worse she got a new captain six weeks later.