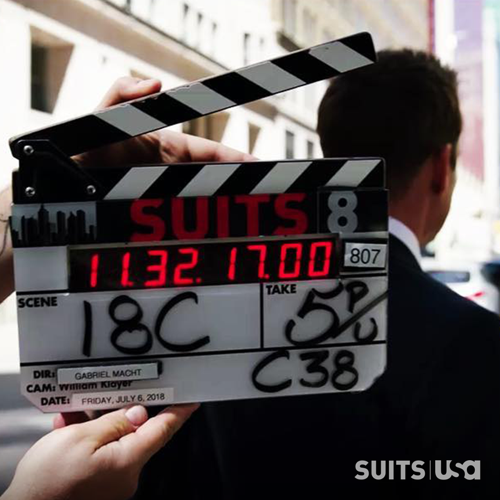 Tonight on the USA Network their critically acclaimed drama, Suits returns with an all-new Wednesday,  August 22, 2018, episode and we have your Suits recap below. On tonight’s Suits season, 8 episode 6, “Cats, Ballet, Harvey Specter,” as per the USA Network synopsis, “Harvey and Louis assess their relationship. Donna doubts Samantha’s motives for helping her.”

Donna asks Alex if he would be willing to give his time to at-risk girls. He tells her he is slammed but he tells her to tread carefully with Robert. She tells him she won’t make the same mistake twice.

Louis asks Katrina to take on another case for him. It is the only way he can make her a senior partner with the other lawyers voting.

Louis goes to tell Harvey they are losing a client and he has to accept it. Donna comes in, Joan Walsh has arrived to see Louis. He tells them he needs to leave to go see Sheila. Harvey gets annoyed and meets Joan. She has an influence that has written a bad review about her make-up. Her sales are taking. Harvey laughs after hearing the girl is just 16. Joan isn’t happy and demands he do something or she will drop him.

Samantha comes to see Donna. She can help with her charity. Donna thinks she isn’t the person for this. Samantha persuades her. Meanwhile, Katerina asks Brian to help her with the case Louis put her on.

Harvey meets the 16-year-old and her lawyer. They refuse to take the video of her review down. Unless she can get $10 million for her breakout skin and mental anguish. Harvey doesn’t care. He isn’t giving in.

Louis comes to see Harvey. He wants to hear all about Joan. Harvey tells him he has it under control. When Louis pushes, Harvey explodes.

Katerina and Brian meet with the company using their client. Meanwhile, Louis meets with his shrink to talk about Harvey. Louis comes up with an idea, maybe he can get Harvey to come in and talk. Kind of like couple’s counseling.

Katerina tells Brian she isn’t getting anywhere with their case. Brian offers to stay the night so they can work together. They sit and talk while eating Indian. Donna catches the moment Brian wipes Katerina’s face. She leaves to go to her function for At-Risk Girls.  Samantha is there. Donna is surprised. She is also impressed with the donations Samantha has secured.

The next morning, Donna brings Samantha a coffee. They get to talking. Samantha thinks the woman Peggy collecting the funds is up to no good. Donna tells her she will look into.

Katerina and Brian are stumped on the case until they decide to talk to the opposing companies caddy.

Harvey offers to go with Louis. Louis tells him they have some deep work ahead and they will need tissues.

Donna comes to see Peggy who has been fired. Samantha called and put a stop payment on the check. Donna comes to see Samantha. She is angry.  Samantha tells her she gave her time to talk to Peggy. She knows they are stealing from little girls. Donna leaves after telling Samantha she was right about her all along.

At therapy, Harvey is asked how Louis thinks. Harvey talks about Louis’ jealousy. Louis gets angry. He feels he is being mocked. Louis leaves. Louis’ shrink offers to help Harvey anytime after telling him he needs his own help.

Donna comes to Alex to tell him about Samantha. He tells her he knows Sam is right. She’s good at picking up on shady business.

Katerina finds Donna in deep thought in the copy room. They talk about Katerina becoming a partner. Donna asks her about her and Brian. Katerina gets upset. She only sees Brian as a friend and would never do anything. He is married.

Louis calls his shrink who tells him he is going to see Harvey. Louis gets angry. He tells Louis that Harvey is in pain and he should want someone to help him.

Katerina and Brian find out that they are being counter-sued. Katerina freaks out. This means her partnership. They find a loophole and some damning evidence. She tells Brian to go home and see his family. She has this.

Donna apologizes to Sam. Sam also wants to apologize. She cares so much. They decide to work together. Donna knows Peggy is innocent. But her company may not be.

Harvey goes to see Louis’ shrink on his own. It comes to the surface that Harvey is really afraid Louis is going to leave him when he has the baby. He will leave like everyone in his life does.

Sam and Donna go to see the man embezzling. They tell him they know what he has done and he needs to step down and give Peggy his position. He gives in, knowing they have the proof.

Brian goes to see Katerina. They won. He thanks her for the night off. He and his wife had a great time watching movies.

Sam and Donna make plans for drinks. Sam is going to tell her why the charity is so important. Meanwhile, Harvey finds Louis and thanks him for letting him go see his shrink. He also begins to explain himself and how he is afraid to lose him when Louis gets giddy and calls them brothers from another mother. They head out for drinks.